Climate liability: time to settle up?

Quintin Rayer and Karsten Haustein discuss the concept of a climate liability regime, and how such a regime could affect investors’ decisions 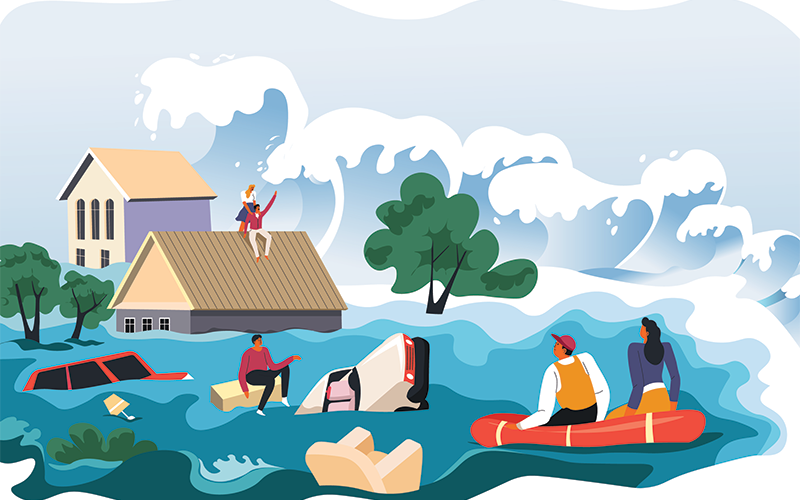 Environmentally focused investors often consider climate risks. However, potential liabilities for extreme weather event damages caused by carbon-intensive sector emissions present risks that may not be reflected by financial markets. How close are we are to some companies or sectors being held liable, at least partially, for their activities? Perhaps closer than many expect. Recent studies have explored potential consequences for the top seven carbon-emitting publicly listed companies. Under a climate liability regime, these firms might increasingly see financial losses from North Atlantic hurricane seasons of around 1-2% of their market capitalisations (or share prices). Evidence of enhanced major hurricane risk in response to human-induced global warming is strengthening. Additionally, projected changes are more significant, with greater possible share price impacts for high-emitting firms.

In 2017, Hurricanes Harvey, Irma, Jose and Maria caused damages estimated at US$265bn, making that season possibly the costliest to date. New Orleans’ devastation in 2005 by Hurricane Katrina caused US$211bn worth of damage. Excluding the Caribbean, damages from other severe seasons in 2004 and 2012 were less than US$75bn (in inflation-adjusted 2017 US dollars)

The Saffir-Simpson scale rates hurricane wind speeds, with major hurricanes being those in categories 3, 4 or 5. Generally, damages can relate to wind strength, although this is not necessarily a straightforward association. The damage a hurricane causes also depends on its path, and the population and infrastructure it may cross. However, the category of a hurricane indicates its maximum potential damage – so an increasing frequency of stronger hurricanes will inevitably raise the risks of unprecedented destruction.

Who are the emitters?

Analyses have begun to quantify the historical contributions to global warming from individual nations and companies.

Atmospheric CO2 rose from 290ppm (parts per million) in 1880 to 410ppm in 2018. Climate modelling has linked emissions from 90 major carbon producers, showing that around two-thirds of global mean temperature rises are attributable to accumulated CO2 emissions between 1980 and 2010. Cumulative CO2 emissions are the primary cause of global climate system changes, making allocation of historical responsibility relatively straightforward.

In 2015, the fossil fuel industry and its products accounted for 91% of global industrial greenhouse gas emissions and about 70% of all human emissions. If extraction trends in the next 28 years mirror the preceding 28, global average temperatures rises of around 4°C would be expected by 2100.

Since 1988, just 25 entities have accounted for 51% of global industrial emissions. Seven were publicly owned companies, collectively accounting for 9.5% of Scope 1 and 3 emissions between 1988 and 2015 (Figure 1). The ‘scopes’ classify emissions’ origin. Scope 1 emissions are from sources directly owned and controlled, such as fuel used by company vehicles. Scopes 2 and 3 cover indirect emissions – Scope 2 covers energy use, Scope 3 all other indirect emissions, including those caused by customers. 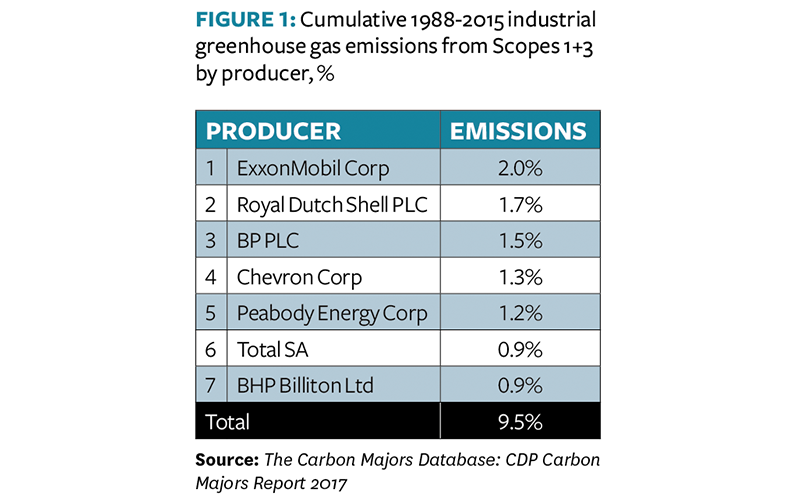 The combined market capitalisation of these seven companies was US$1,303bn in August 2018. This fell during the COVID-19 pandemic, before recovering to US$718bn in May 2020. The analysis uses 2018 values. The results could be increased proportionately if long-term capitalisations differ. If these seven firms were to contribute 9.5% of the US$265bn hurricane damage from the 2017 Atlantic season, this contribution would equal US$25bn – an amount corresponding to a 1.9% detriment to their market capitalisations (or share price). This is a significant sum, considering that similar contributions might arise regarding other past and future extreme weather events.

As global warming increases the number of major hurricanes, a hypothetical climate liability regime could develop. Contributions of around 1-2% of these high-emitting companies’ market capitalisations (and share prices) might be anticipated increasingly frequently with each annual hurricane season. Furthermore, this figure ignores other global warming impacts, such as rising sea levels; including these impacts could easily result in much larger sums. The figure also neglects the likelihood that climate responses will become increasingly powerful as global warming intensifies.

As hurricanes occurred before human-made global warming, only costs linked to additional hurricane frequency or intensity are relevant. Estimating pre-global warming hurricane baselines is not easy. Their frequency or intensity cannot be assumed to follow atmospheric CO2 concentrations or global temperature rise in a straightforward manner. Hurricanes have become more intense during the past 40 years, and there could be ‘cliff-edge’ effects associated with tipping points. Small increases in CO2 could generate unexpected extreme weather responses. If we do not stop emitting greenhouse gases, the earth’s global warming may become self-reinforcing in the very long run. For example, Arctic thawing could generate massive releases of methane, a powerful greenhouse gas, thus causing further warming.

Should extractors take all the blame?

To what extent should fossil fuel companies be held responsible? What about motorists, or those using home heating?

It seems unreasonable to blame all vehicle emissions on motorists. Many motorists need a car, and fossil fuel-free cars are relatively expensive – and were not readily available until recently. Much responsibility lies with industrial suppliers, who must provide efficiency gains and alternative technologies. Users are not excused, but the responsibility share must be established.

One allocation is the current split between industrial and non-industrial emissions. In 2015, around 77% of all human emissions were industrial. Taking this as representative of the producer-user responsibility allocation, the share of damages attributable to the seven firms could be reduced to US$19bn, or 1.5% in share price terms.

Both pre-global warming hurricanes and producer-user responsibility are relevant. Jointly, the initial damage estimate of US$25bn should potentially be reduced to US$16bn, or 1.2% in share price terms. All these figures fit within the 1-2% share price detriment first mentioned. Based on the May 2020 market capitalisations, the equivalent share price figure would be 2.2%.

This only considers US hurricanes; global damages would be much higher. The analysis also neglects sea level rise caused by climate change, which could cause tremendous damage. In other localities, droughts and heatwaves – leading to agricultural losses, water scarcity and stresses on human health – are expected to rise.

How rapidly should investors respond to the possibility that companies may have to make contributions to climate damages? No legal cases have established climate damage liability, but some have backed legal action with investment policies. The City of New York is seeking to divest fossil companies from its US$189bn pension schemes in a way consistent with fiduciary responsibilities.

Cautious investors might be concerned, particularly if they are uncertain about how much these risks are priced into the relevant companies’ shares. Any movement towards an active liability regime could risk these shares becoming stranded assets. Given the mounting evidence and potential risks, some investors may wish to steer clear.

Dr Karsten Haustein is a research associate in climate systems and policy at the School of Geography and the Environment, University of Oxford

This article appeared in our August 2020 issue of The Actuary.
Click here to view this issue
Filed in
General Features
Topics
Risk & ERM
Environment