Dan Georgescu talks to Professor Nick Higham, Richardson Professor of Applied Mathematics at the University of Manchester, about his role in applying maths to financial problems 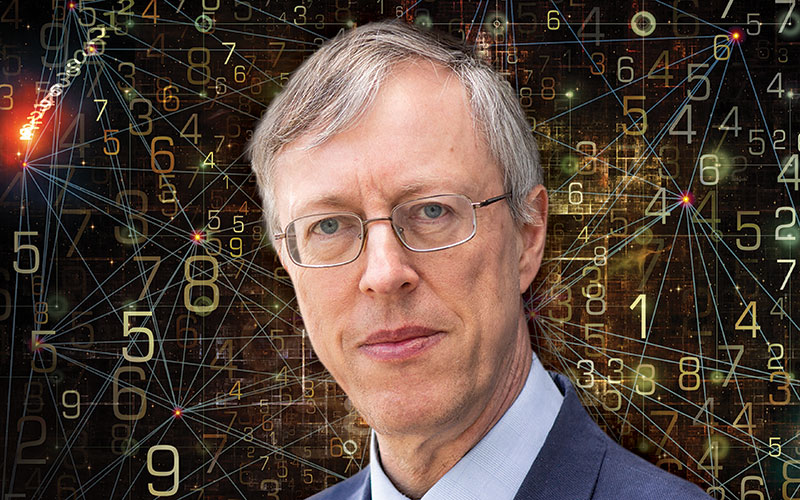 It is difficult to overstate the importance of Professor Nick Higham’s work for the insurance industry. The Higham algorithm and its successors for finding the nearest (valid) correlation matrix (NCM) are embedded in most internal models and economic scenario generators, underpinning the calculation of the capital requirements across Europe, which is measured in billions of pounds and euros.

In 2000, Higham was approached by Orbis, a London investment company, which asked whether he knew the best way to approximate an ‘almost correlation matrix’ by a true correlation matrix. The problem was that the matrix was constructed from stock return data, in which stock prices were missing on certain days. “If one takes the pairwise sample correlations on the days that each pair of stocks has data, the result is a matrix that is superficially okay, but is usually non-positive semidefinite because of the inconsistent datasets,” he says. “Indeed, even for very small dimensions a matrix can look like a valid correlation matrix, with ones on the diagonal and off-diagonal elements between -1 and 1, but can have negative eigenvalues. And negative eigenvalues have potentially dangerous consequences, such as an investment portfolio with negative risk.”

When Higham looked into the problem, he found that while there had been some attempts to find the NCM in the Frobenius norm (which is based on the sums of squares of elements), none of them were guaranteed to converge. He was able to develop the mathematical theory of the problem and propose an alternating projections method that provably computes the unique solution.

The 2002 paper presenting this work is still his most cited paper; the reason for this is not obvious, though. “While finance is a major application for the NCM, the problem has proved to be ubiquitous, thanks to the explosion in data-driven models,” he says. He checked Google Scholar just before this interview took place and found that the latest citation comes from a paper on the environmental impacts of pig production.

Another project he is particularly proud of is The Princeton Companion to Applied Mathematics (2015), which he edited. This 1,000-page book was produced over a five-year period and comprises 186 articles from 165 authors. It covers a broad range of topics and includes articles on financial mathematics, portfolio theory, mathematical economics, and mathematics and policy.

The Princeton Companion was intended to deal with issues that are likely to be of enduring interest. The article ‘The Spread of Infectious Diseases’, for example, is one that will currently be of even greater interest than its authors expected.

Keeping it in the family

At the age of 16, Higham felt that English and maths were his best subjects, but decided to pursue the sciences for A-Level as he thought this would lead to a better career path. During his A-Levels, maths was his favourite subject, and so he continued it at university. He most enjoyed the numerical analysis courses and was fortunate to have his own Commodore PET (one of the early microcomputers) on which he could program many of the algorithms. By the time he came to write his final year undergraduate project, he realised that he was out of practice at writing prose. Remedying this led to his lifelong interest in scientific writing, and he has just produced a third edition of his book on the topic (Handbook of Writing for the Mathematical Sciences, Society for Industrial and Applied Mathematics, Philadelphia, 2020).

Higham has written several papers and a book (MATLAB Guide, 3rd edition, SIAM, 2017) with his younger brother Des, who is a professor in mathematics at the University of Edinburgh. He collaborates with his wife, Françoise Tisseur, who is also a mathematician – as are her two siblings, Des’s wife and her three siblings. The pattern is not difficult to spot; part of what unites them is a deep love for and interest in the subject.

The University of Manchester

Why is Manchester, where Higham is based, such a hotbed of mathematical innovation? “Manchester has been at the heart of advances in science and technology since the Industrial Revolution,” he explains. “Two of the University of Manchester’s most well-known breakthroughs were the splitting of the atom by Rutherford and the development of the world’s first stored program computer [the Manchester Baby] in 1948 by Kilburn and Williams. Most recently, graphene was discovered here by Geim and Novoselov.” He finds that the University of Manchester provides an environment that encourages innovative research, and is particularly supportive of interdisciplinary work and collaboration with industry.

COVID-19, however, caused all universities to cease on-campus activities in March, and lecturers immediately transferred to online teaching. UK universities were ahead of the game compared with many other countries, as they had been using e-learning platforms for some time. Several of Higham’s colleagues in the Department
of Mathematics have been engaged in the global efforts to mathematically model the virus’s spread.

His world-class research and outstanding achievements have been recognised with The Royal Society Research Professorship, the Society’s premier research award. What does the grant mean to him? “It provides long-term support enabling me to concentrate on research, freeing me from teaching and administrative duties. It started in 2018 and has enabled me to expand my team and tackle a wide range of research problems of practical interest. Our goal is fast and accurate solution of numerical linear algebra problems on modern computer architectures, and the computing resources we target range from a desktop PC to the world’s fastest computer, Summit at Oak Ridge National Laboratory.”

We discuss the focus of his current work, much of which is related to floating-point arithmetic – used for most financial and scientific computations. “For a couple of decades leading to the mid 2000s, everyone used the same arithmetic: IEEE standard double precision or single precision,” he says. “Nowadays it’s like the Wild West, with IEEE half precision and Google’s bfloat16 (also a half precision format) available in hardware and other low-precision formats being proposed for machine learning. Because these low-precision arithmetics execute so fast on graphics processing units (GPUs), it is tempting for programmers to use them, but the computations are obviously of low accuracy, and underflow and overflow are much more likely than for single precision or double precision. Machine learning algorithms seem to be quite resilient to reduced accuracy, but in financial and scientific computations we have to be very careful about allowing large errors in the computational pipeline.”

Higham is working to exploit the speed of low-precision arithmetic while still providing higher precision accuracy of the results, principally by developing mixed precision algorithms. “Of course, the users of software packages should not need to worry about what lies under the hood, but for now it is prudent to check the accuracy of any software that claims to be ‘GPU accelerated’.”

He also writes a blog, which covers an impressive range of topics: from research to software to the best pencils to use for handwriting mathematics. I have to ask how he finds the time. “I’m good at managing my time and have efficient workflows,” he says, recalling his time as president of the Society for Industrial and Applied Mathematics (SIAM), the world’s largest applied mathematics society. “I wrote a monthly column for SIAM News, the society magazine. I prepared the columns in Emacs Org mode [Emacs is an old but very powerful editor] and exported them to LaTeX for proofreading and finally to Word for submission to SIAM. One of my time-saving secrets is to spend as little time as possible using Word!” Although he exploits technology to the full for work purposes, he also enjoys using analogue tools. “Nothing beats a pen or pencil and a notebook when you want to be creative”.

This article appeared in our June 2020 issue of The Actuary.
Click here to view this issue
Filed in:
General Features
Also filed in:
Interviews