Would the majority of COVID-19 victims have died this year anyway, as some have suggested? Matthew Edwards and Stuart McDonald investigate 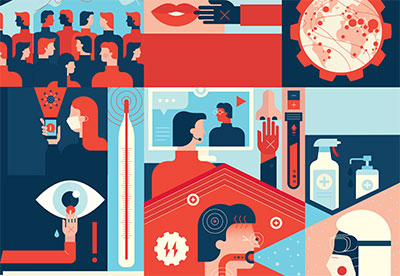 There has been comment and speculation in the media about the actual and likely future life expectancy of COVID-19 victims – often with an implied downplaying of the impact of the virus, as ‘they were about to die anyway’. This became a perceived official view when Professor Neil Ferguson said in a session with the UK Parliament’s Science and Technology Committee (25 March) that “the latest research suggested as many as half to two-thirds of deaths from coronavirus might have happened this year anyway, because most fatalities were among people at the end of their lives or with other health conditions”.

How this view has arisen

The strongest case we have seen for the ‘they would die soon anyway’ position is based on use of Bayes’ theorem. Most readers will realise how this will apply here: we can calculate ‘probability of COVID-19 causation given death’ from an assumption about ‘probability of death given COVID-19’ (ie the case fatality rate, [CFR]), along with equivalent probabilities of deaths from other causes. If the CFR is very low compared with the ‘other causes’ probability of death for an individual, it follows (via Bayes) that their death in any year can be attributed largely to natural causes, not COVID-19.

The other argument for this case arises simply from observing that many of the deaths reported from COVID-19 have been deaths of people with existing medical conditions. For instance, 17% of Italian COVID-19 patients in intensive care had a history of diabetes, and 49% had hypertension (bit.ly/2KhdrsP). (We will take a look at some equivalent UK intensive care [ICU] figures later.)

“There is a big difference between COVID-19 causing death, and COVID-19 being found in someone who died of other causes… It might appear far more of a killer than flu, simply because of the way deaths are recorded.”
Dr John Lee, professor of pathology and NHS consultant pathologist (retired), The Spectator

The reporting of such aspects, along with other risk factors such as obesity or smoking, has so far (with data emerging only recently) been ‘crude’ in the sense that it has not been adjusted for age. However, deaths from COVID-19 have generally been occurring at high ages. For instance, in Italy, 84% of male deaths have been in those above the age of 70 (ISS statistics as of 26 March 2020), while, at the time of writing, 93% of deaths in the UK have been in those older than 65. At these ages, many people will have some form of ‘existing condition’. For instance, the 2018 Health Survey for England (bit.ly/2x3oByr) shows that among those aged 65 and over, 29% have hypertension, 16% have diabetes, and 30% are obese.

While the differences between countries reduce comparability, it is clear that the prevalence of existing conditions at high ages is not massively out of line with the proportions being seen among those dying from COVID-19.

When considering the life expectancy of people with conditions such as those above, a useful approach is – do they have just months to live, or many years?

For this, we have made use of a proprietary underwriting engine that calculates life expectancies for people according to age, gender, disease history, lifestyle (body mass index, smoking habits) and various other factors. The engine was calibrated to a rich data set, has been used by, or on behalf of, most of the UK’s annuity writers, including impaired life writers, and has been validated extensively against market data.

Using this underwriting engine, a life expectancy below a couple of years can be found only by assuming acute cancers, or other serious but less critical conditions at ages above 90, or such conditions conjoined with adverse risk factors (eg smoking) from the mid-80s.

For anything else, life expectancy is typically five years or more. For instance, Figure 1 shows the life expectancy for obese male smokers of different ages, with additional various disease combinations. Chronic obstructive pulmonary disease (COPD) is of particular interest in the context of a virus that kills via a pneumonia-like mechanism causing respiratory failure.

By looking at men rather than women (men having a lower life expectancy), considering the ‘obese smoker’ subset of these impaired lives, and assuming no future mortality improvements, this table shows a worst-case scenario. Even with this extreme selection, we do not see life expectancies below one year, and it takes a lot of ‘forcing’ the factors in the engine to find life expectancy as low as two or three years.

Of course, life expectancy is an average, and some of these cases would still die during the course of a year in the absence of COVID-19. In most instances, though, the number is not high. For instance, Figure 2 shows the distribution of deaths for a cohort of 60-year-old obese diabetic male smokers as per the above table – fewer than 3% are expected to die in the next twelve months.

ICU supports failing organs while a patient’s underlying illness is treated, and is usually only helpful when the patient has a potentially reversible condition.

The Intensive Care National Audit and Research Centre’s (ICNARC) report of 17 April 2020 (bit.ly/3bzWGoI) on COVID-19 critical care patients and their outcomes presents a useful profile of the 5,578 patients recorded. Figure 3 summarises the age and sex profile of these patients.

Most patients (72%) are male and, on average, 60 years old; 38% are obese (BMI > 30), compared to 30% in the
general population. Just 7% have very severe comorbidities and 7% needed some assistance with daily activities prior to contracting COVID-19. (ICNARC also provides corresponding numbers for normal viral pneumonia cases during the past two years, where we see 24% of patients with very severe comorbidities, and 26% needing assistance with daily activities). It seems clear from this high ratio that the majority of deaths can be regarded as being due to COVID-19, not to other conditions.

For reference, of the actual deaths detailed in the report, only 9% were recorded as occurring in the presence of severe comorbidities. In the next section, we consider whether that statistic is representative.

ICU patients are obviously not representative of the general population – it would be worrying if they were – but, other than the severity of the disease, are they broadly representative of all those known to have COVID-19? In other words, is the triage process applied to COVID-19 sufferers likely to have removed, for instance, those deemed incurable or too frail, given that the numbers of potential ICU patients may exceed the number of spaces?

We can consider the impact of triage by examining the COVID-19 Decision Support Tool, believed to be in use by the NHS at the time of writing. This sets out a points-based system to help clinicians prioritise patients who are most likely to benefit from intensive care. Core to the assessment is a Clinical Frailty Score, ranging from ‘1 – Very Fit’, through ‘4 – Vulnerable’ up to ‘9 – Terminally Ill’. Most people without life limiting conditions would score 1-3. Points are added to this score based on age/sex and certain comorbidities as indicated in the tables below (the full co-morbidity list is not shown for simplicity).

Individuals whose score exceeds 8 would not typically be recommended for ICU-based care, though of course clinical discretion overrides. While it is clear that there will be some selection effect, the majority of patients below age 75 and a significant proportion of older people will be recommended for ICU-based care where necessary. We can cautiously conclude that the current ICU population is not highly selective and therefore the disease is making significant numbers of individuals who were otherwise fairly healthy (and certainly not ‘at death’s door’) seriously unwell.

This conclusion is consistent with our discussions with two critical care consultants, who have confirmed that COVID-19 ICU patients are broadly representative of general hospital patients (albeit with the most and least healthy tails of the distribution removed) and that “COVID-19 patients admitted to our ICU are generally healthier than our normal patient population, but despite this, have a high mortality. People are dying in middle age, with many years ahead of them.”

While it is very likely that other conditions or unhealthy lifestyles weaken the immune system and increase the chance of death from COVID-19, that is quite different from attributing the deaths to those other conditions.

“This is a horrible, relentless, nasty disease in its severe form… They are NOT dying from comorbidities. They are dying from COVID-19.”
Sanjum S Sethi MD, MPH

Another valuable perspective on the issue can be had by using the expected first-year mortality rates from the underwriting tool mentioned previously, applying these to a model point representing the ICU population described above, and working out how many would be likely to die this year purely because of their existing condition or risk factors.

For this we have taken a 60-year-old (the approximate mean age of the ICU group), but assumed an obese male diabetic smoker in order to have an ‘extra unhealthy’ individual (as we did for Figures 1 and 2). Assuming 10 months (ie 1 March through to end of 2020) of mortality exposure applied to 5,578 lives gives:

Note that the expected result is likely to be an overestimate, because of the fairly extreme model point used, while the actual deaths will be an underestimate, as a majority of the patients are still in critical care. Thus, the real Actual:Expected ratio is likely to be greater than the 1,445:111 ratio (ie a ratio of 13:1 of COVID-19 deaths to co-morbidity-related deaths) shown.

We can see from this that few of the ICU intake would be expected to die because of their other conditions, and that this expectation is backed up by the ICU data currently available.

As with much of the work on COVID-19, the question cannot be answered fully and precisely at the moment. The issue will be better resolved once we are able to compare total deaths during a reasonable period against total deaths during the same period in previous years. For the UK, data that will allow a meaningful comparison is only just beginning to emerge.

So far, we can say that more deaths were recorded in the week ending 3 April than in any other week during the past 20 years. Death rates were 59% percent higher than the equivalent week in 2019. By early May there should be a reasonable body of evidence, and EuroMOMO data will provide equivalent Europe-wide comparisons.

However, even with such data, it is likely that some may say, ‘many of these deaths are because of, not from, COVID-19’ in the sense that healthcare resources have been deployed from, for instance, cancer care to COVID-19 care. Others will say, ‘their deaths are just accelerated from next year’.

Recapping the main arguments, COVID-19 does seem to disproportionately affect people with chronic health problems. On the other hand, while it affects the old more than the young, and a large proportion of the elderly will have chronic health problems, only a tiny fraction of impaired lives have life expectancies of the order of one year. Therefore we feel it is unfounded to claim that a large proportion of those who have died from COVID-19 in 2020 would have died in any case this year.

This claim, in addition to being false, is also dangerous from a public health perspective: it understates the risk from the disease, endangering adherence to government policy on social distancing. It also seems very callous, encouraging a ‘why should I care?’ attitude to the people in question – in our view, people who would (in the great majority of cases) be alive now in the absence of the coronavirus, and would probably still be alive in several years’ time.

Matthew Edwards is a director at Willis Towers Watson, where he leads the life demographic risk group. He is chair of the CMI

Stuart McDonald is head of Demographic Assumptions and Methodology at Lloyds Banking Group, and sits on the CMI’s Executive Committee as CRO