How far have you progressed in your actuarial career? And what skills do you need right now? 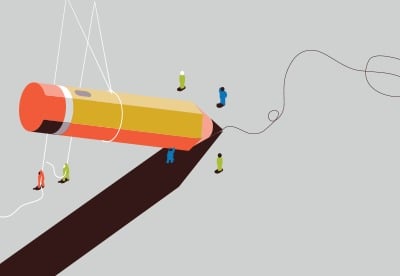 Whether you're a graduate student or a fellow, there's one skill you're guaranteed to need: writing well. Whether it's an exam paper or a group actuarial report, you'll be judged on how clearly and concisely it's written.

Anyone can learn to write well

Considering the importance of writing well, why are so few actuaries taught how to do it? Is it because 'anyone' can learn on the job and if you don't, it's your fault? Because studying the art of writing is for humanities graduates, not actuaries? Because writing is some mysterious gift bestowed on the few? Because either you're a numbers person or a words person?

All these 'becauses' are myths. Yes, a little artistry helps, but much of business writing is like carpentry: master the tools and you can build solid documents with seamless joinery and plenty of polish.

Know your outcomes and readers

As with carpentry, you first need to clarify your aims. So just as it's not 'planks on a wall' but 'somewhere to put your books', it's not a 'report for management' but 'persuading management to do X not Y'. Before you write a word, ask yourself:

The top reason documents fail is that they don't address these questions. For example, a policy full of passive sentences ('reports are written, risks are monitored') has failed to achieve its fundamental purpose of explaining who must do what.

The question 'Why should they care?' is crucial, because people read only when they have to or when they want to. It's naïve to assume that 'have to' is enough to get people to read. Think of those terms and conditions that are so boring we click 'Accept' without reading them: for all we know, we've unwittingly agreed to sell Google or Amazon our kidneys.

How do you discover what your readers need and want? It sounds nugatory, but talk to them. What they care about and know (and, critically, don't know) is likely to differ wildly from what you assume. Smart questions to ask readers include:

Now you understand your audience, what next? Gather your materials, which can be either primary (what you know or can ask) or secondary (what's written already).

It's a waste of time regurgitating secondary sources - what I call 'rewriting the wheel' - so ask yourself:

Select or design a template

The best templates are easy to use and legible: clear typeface, optimum line length (40-70 characters, roughly eight to 12 words), ragged right margin (more legible than justified), and headers and footers fed by fields such as filename and 'last saved' (easier than having to hand-type the doc name and version number each time).

A good filename tells readers two important things: what the document's about, and its relationship to other documents. So follow a consistent filename taxonomy, such as Client_topic_doc-type.

It's wise to create a skeleton of headings with a clear narrative spine before fleshing out each section. Give each 'bone' in your skeleton a meaningful label (not 'Introduction' but 'Introduction to <whatever>') and apply a structure strong enough to support your text: for example, familiar to unfamiliar, generic to specific, chronological, and so on.

When writing your first draft, a great trick is to structure each section according to what journalists call the 'inverted triangle' - heading, followed by the 'lead' (a one or two-sentence summary of what the section's about) and only after that the details. Information's far easier to grasp if it's contextualised first - and heading/lead/body aids skim-reading.

Don't get too hung up on finessing your text when you're bashing out your first draft. One secret of great writing is 'write fast, edit slowly' - so you unleash your right-brain creativity with your nagging inner critic muzzled, then let your left-brain critic rip your draft to shreds.

After your first draft it's all about the editing, which includes:

There's much more to it than this, of course, but I've run out of words so you'll have to wait for the next article. Which reminds me that another good writing technique is to finish on a cliffhanger