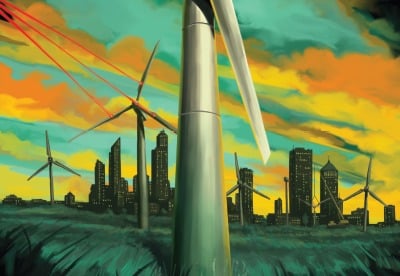 A number of insurance products are sensitive to wind. Wind measurements feed into the assessment of investment risk during project planning and development, while development and operational projects are subject to due diligence assessment during financial transactions, making reference to the site wind conditions and asset performance (actual or expected). Assets also need to be engineered appropriately for local wind conditions - during operation, wind turbines and some other assets, such as tall buildings and bridges, undergo engineering fatigue as a result of wind. Additionally, wind turbine suppliers may provide warranty and maintenance agreements that include performance-based bonuses or penalties based on availability to generate, or guarantees of electricity sales revenue. Knowledge of wind conditions, therefore, is of financial significance.

Wind farms tend to be built in windy locations, using cranes. Crane construction limitations also depend on wind, especially when conditions are gusty, stormy or turbulent. Risks increase with a raised centre of mass; wind can cause a load to swing and rotate. Accidents cost money and reputations, as well as having a human cost - so complex wind flow is also important to the construction industry, especially when it is using cranes.

The UK is a world leader in offshore wind farm construction, where jack-up vessels or barges employ cranes in harsh offshore conditions. Cranes may be used in windy conditions such as port or harbour operations and high-rise construction. The urban environment can be particularly complex due to funnelling effects as wind flows through streets and avenues between high buildings. Crane construction and architecture, therefore, are subject to major wind influence.

Wind can be significant in other industries too, such as in aviation, where it affects runways and helipads. The history of insurance is interwoven with maritime shipping and storms, including wind.

Can better wind measurements be used:

Research reveals that complex terrain and weather are sources of complex wind flow, but modern industrial wind turbines do not include any measurement of flow complexity - despite each costing millions of pounds. They measure only wind speed and direction within a horizontal plane, failing to account for the fact that wind velocity is a three-dimensional vector.

Although existing instrument measurements feed into operational control systems, these only provide measurements at a single point. This would be reasonable if the incident wind velocity field was constant across the whole rotor, but wind varies spatially. Moreover, wind turbines are subject to substantial variation across their large rotor diameters, now greater than 200 metres.

When we observe a large tree in a breeze, we can see the dynamic and spatial variability of wind, pushing hard and from different directions - from side to side and from top to bottom. Since the aerodynamic forces of lift and drag generated along each wind turbine blade length depend on relative airspeed and angle of attack, the variability of the wind velocity field is important to turbine performance, both for power generation and for loads within the structural components and foundation.

Only a beam scanning system of converging LIDAR beams can measure the three-dimensional wind velocity at a plurality of locations. This enables planar or volumetric wind field mapping that feeds into improved look-ahead pitch and yaw control.

The new laser wind measurement technology employs three converging beams instead of a diverging beam design, which suffers from a number of disadvantages (see Figure 1). Doppler LIDAR laser wind measurement works by measuring the Doppler shift of laser light reflected from microscopic particles carried by the wind. However, this only gives the wind velocity component along the laser line of sight. By employing three converging beams with different directional components gathered at the chosen measurement point, it is argued that the three-dimensional wind velocity is more accurate; by scanning from point to point, one may map the wind velocity vector field through space. This allows proper consideration of three-dimensional wind flow effects and variation of wind flow across large wind turbine rotor areas.

The use of this new 'big data' in machine learning systems could present us with great opportunities. Artificial intelligence such as neural networks are known to perform well at pattern recognition tasks. Given a training data set, a neural network can evolve its neural weighting factors in order to process a large number of input data and thus correctly categorise the inputs by flagging an output signal.

For instance, photographs of cats and dogs may consist of an array of pixel data. The input data may be represented as a large vector of numbers and the output signal may simply be a number between zero and one, where an output closer to zero indicates 'cat' whereas a number closer to one indicates 'dog'. The training data is provided as sets of photos paired with a zero or one confirming the category, and as more training data is fed to the neural network, its blind performance improves.

In the case of wind turbines, or indeed other structures such as cranes, the input data is simply the converging beam LIDAR-measured wind data representing samples of the wind flow vector field. The question in this case is not whether the inputs represent a cat or a dog but whether they are associated with increased loading in the wind turbine, crane or other structure. To gather training data, we also need to use load sensors, which measure the loads.

For example, wind turbines often employ vibration condition monitoring sensors on the rotating drive train. Wind turbine blades can be instrumented with strain sensors. The foundations, the tower and indeed any component may be instrumented with its own sensors. The same goes for components of a crane, which may include hook load sensors, strain sensors, cable tension sensors and other measurement devices. Any given sensor could represent a binary output analogous to categorising a cat or dog, but in this case the load sensor binary category might denote a high load sensor value, above an alarm or warning threshold.

A given set of wind conditions, including wind shear, non-horizontal inclination angle or generalised vector field time series data, may give rise to a whole set of outputs in a set of load sensors. Instead of a single binary cat-dog categorisation, the output may therefore be a vector of numeric values representing the overall load sensor suite. The neural network can be trained in order to predict which wind field attributes will give rise to sensor output vectors, with one or more sensors indicating an alarm state.

As the neural network evolves, its performance can be monitored. As long as the load sensor data is available, we can check it against the machine learning prediction. We can evaluate the success rate and the false alarm rate of a neural network. Once the success rate is high enough and the false alarm rate is low enough, we may consider that the machine learning has reached a level of education sufficient to be employed for a task. For instance, new control functionality may be switched on in order to reduce the loading and ride through more smoothly what would otherwise be damaging conditions.

Collaborating with Dr Brooms of Birkbeck, University of London, the team's work (bit.ly/2uJRsGs) calculates, in a very precise manner, how LIDAR measurement errors propagate through to the reconstructed velocity. Consequently it is possible to calculate these errors for a given measurement configuration, to design LIDAR measurement configurations more intelligently, and to achieve reduced forward uncertainty propagation in wind measurement - both for assessment of financial risk at the planning stage, and for feeding into improved control systems that reduce financial risk at the operational stage.