From epidemiology to polypharmacy, Matthew Edwards provides a selection of highlights from the IFoA’s forthcoming Longevity Bulletin 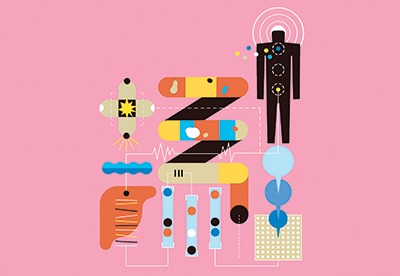 Researching research: the ups and downs of epidemiology

Readers of articles summarising medical studies might assume that the combination of rigorous study design, impartial analysis and independent peer review would make the output 'cast iron'. Why, then, do we read statements such as:

What has driven these concerns? And if they are well-founded, how can we assess the validity of any published research? How did epidemiology come to be in this position?

Epidemiology became a promising field of medicine in its own right in the 1950s, with well-known studies relating to smoking and the discovery of the harm caused by tobacco, as well as hypertension. How, in the field's infancy, would one interpret or judge epidemiological results?

In 1965, Bradford Hill (whose work with Richard Doll helped determine the link between smoking and lung cancer - see Figure 1) published 'The Environment and Disease: Association or Causation?' in the Proceedings of the Royal Society of Medicine. In this paper, he introduced what have been known since as 'the Bradford Hill criteria' (see box). They have remained the standard criteria for distinguishing association and causation ever since, with a much wider scope than just medicine. 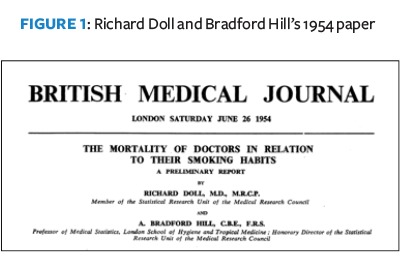 The rise and fall of epidemiology?

For some time, there has been a 'diminishing returns' problem: each decade has felt less illuminating than the previous decade. Far from the aforementioned ground-breaking studies on smoking and hypertension, modern epidemiology seems more concerned with continually conflicting claims about aspirin, broccoli, coffee and so on (the list could be extended alphabetically to Z without much difficulty). And quantification of the reputed harms or benefits - with typical risk factor effects shown of the order of 10-20% for particular causes of death - shows life expectancy impacts of the order of a few weeks, compared with the massive life expectancy impact of five-10 years (for a 50-year old) implied by the smoking studies.

The hierarchy of medical evidence is often expressed in the pyramid shown in Figure 2. Higher layers represent increasing internal validity as the risk of bias is reduced (if not eliminated). The efforts taken to allow for confounding factors increase the likelihood that the phenomena observed are likely to result from the causative mechanism of interest.

However, the dividing lines are not always clear cut. For example, while a cohort study tracks the experience of many individuals over time to assess the longitudinal impact of risk factors or treatment, carefully selected pairwise comparisons in a case-control study may provide stronger explanatory power. One problem with very carefully designed studies, though, is that the results will hold true only if the selected population from which participants are drawn is representative of the population to which the treatment or intervention is applied (this issue is explored further in the article on polypharmacy).

The importance of sense checking

While epidemiology remains a vital field of exploration, all claims need to be properly 'sense checked' (given the unreliability of the peer review system). The Bradford Hill criteria are an excellent reference point, but there are other points for actuaries to consider:

Proper appreciation of models requires us to give attention to the real world underlying the models, as Bradford Hill warned us many years ago. Epidemiology is more likely to be misleading when it becomes a purely statistical enterprise, divorced from its underlying reality.

An interesting question is the degree of bias present in observational studies, where studies are constructed 'retrospectively' through the analysis of historical datasets rather than set up on a prospective basis. The study would typically split records according to patients' apparent use of a particular medication or treatment - but adhering to that medication is likely to be a sign of a 'doing what I can to be healthy' attitude, and hence associated with other healthy behaviours.

The most famous (or rather, infamous) example of this bias relates to advice recommending hormone replacement therapy (HRT) following the results of the 1985 Nurses' Health Study. This was an observational study that found a 42% reduction in cardiovascular risk associated with HRT, while an equivalent randomised controlled trial conducted some years later showed a 29% increase in cardiovascular risk from HRT. The difference was seen as largely attributable to other healthy behaviours of those women who had opted for HRT.

Other studies have looked at this issue from the perspective of adherence within the placebo groups of randomised controlled trials - ie what is the mortality of 'placebo taking' versus 'placebo neglecting' individuals? Such studies have shown very striking differentials of the order of 50% risk reduction in respect of placebo adherence - which is acting here purely as a marker for general healthy behaviour, independent of the treatment being studied. 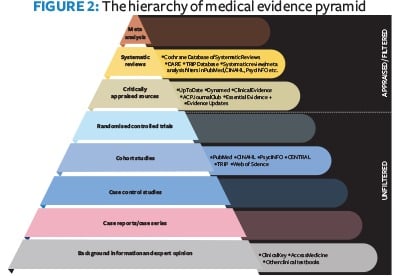 Strength (effect size):The larger the association between 'dose' and response, the more likely that it is causal.

Consistency (reproducibility): Consistent findings observed by different persons in different places with different samples strengthens the likelihood of an effect.

Specificity: Causation is likely if there is a very specific population at a specific site and disease with no other likely explanation.

Temporality: The effect has to occur after the cause.

Plausibility: A plausible mechanism between cause and effect is helpful (although knowledge of the mechanism is limited by current knowledge).

Consistency between epidemiological and clinical findings increases the likelihood of an effect.

Experiment: Do preventive actions taken on the basis of an assumed causal association alter the outcomes?

Analogy: What are the effects of similar factors?

Polypharmacy: is too much medicine reducing life expectancy?

Part of the problem is the continual lowering of the 'normal versus high' thresholds for measures such as blood pressure and cholesterol. Along with the many millions of people 'diagnosed' with hypertension, more than 60% of the adult population is now considered to have a raised cholesterol level.

The labelling of more and more conditions as diseases that require medication has led to an increasing number of drugs being prescribed - and this can be seen in many countries. However, in the UK, another factor has exacerbated the polypharmacy problem. This is the Quality Outcomes Framework (QOF), which regulates payments to GPs.

QOF incentivises GPs to prescribe in accordance with the guidelines. However, these guidelines are based on evidence relating to drugs in isolation. There have been limited attempts to establish whether combining medications creates an additive benefit - but prescription drugs are powerful agents that should be used with caution, as this 2014 study from Harvard University makes clear:

The conclusion of a study in Israel which looked at reducing the number of medications given to elderly and disabled patients showed reduced costs, improved quality of life and a reduction in overall mortality. It could be said that stopping drugs is the single most effective drug treatment currently available. Other subjects covered in the Bulletin

The forthcoming issue of the Longevity Bulletin also contains articles on:

Diabetes and pharma: How pharma is both helping diabetes (metformin) and exacerbating it (statins),by Nicola Oliver

Opioids in the UK:A medical analysis by Dr Chris Martin

Opioids in the US: A statistical overview by Dr Magali Barbieri

Juvenescence: How pharma applies in the anti-ageing space, by Simon Pavitt