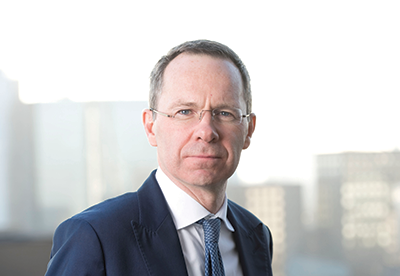 He is the author of the 2017 book A History of British Actuarial Thought.

I meet him in London, where we discuss changes to the actuarial profession, lessons to be learned from its history, and how we should embrace the challenges on the horizon.

Turnbull originally planned to pursue a scientific career, but changed his mind as a teenager - in part due to an awareness that scientific theories never seemed to last forever; he didn't want to learn about things that were going to turn out to be wrong. With hindsight, he now recognises that this is exactly what might have made such a career deeply interesting, and that this is even truer of actuarial thinking over time. In any case, he is pleased to be working in "a profession of learned experts".

Turnbull went on to study mathematics, statistics and finance at university. He believes his skills lie in being able to understand the actuarial problem in front of him and identify the mathematical solution that has a reasonable prospect of solving it.

He is modest about his career achievements, noting that "most of the first 20 years of professional life should probably be considered an apprenticeship". He spent 15 of those years at Barrie & Hibbert, and reflects on the range of experiences he benefited from during that period. When Turnbull joined, it was a small company employing four other people, but eventually became a global leader in its field. This gave Turnbull the opportunity to work closely with talented senior people early in his career, to experience living overseas for a period, and to be part of the process of growing a business and selling it on to new owners (Moody's).

Turnbull now spends his time running a consultancy business and researching his own interests. Part of this research is making its way into a planned second book about the lessons actuarial work can draw from the philosophy of science. He also volunteers for the profession, with his volunteer work including chairing the IFoA's Equity Release Mortgages Working Party.

Learning from the past

Researching A History of British Actuarial Thought gave Turnbull an appreciation of the lessons that can be learned from our past. "A lot of actuarial work deals with the long term," he says. "It is easy to underestimate how different the long term will be to today. An awareness of history helps mitigate that natural human failing." He adds that the history of the actuarial world is full of very smart people, and that many of their insights are timeless. When asked for the key lesson he drew from his research, he quips: "Most good ideas are simple and old!"

An example of this might be found in the topical area of asset illiquidity premia. One might have previously assumed that the actuarial argument for investing the assets backing illiquid liabilities in illiquid assets so as to access illiquidity premia was a fairly contemporary idea. However, it is expressed, fully formed, in Arthur Bailey's 1862 paper in the Journal of the Institute of Actuaries, 'On the Principles on which the Funds of Life Assurance Societies should be Invested'.

Reflecting on the changes to the industry since he started out, Turnbull identifies four key themes that are shaping the profession today:

New actuaries entering the profession will need to "understand the nature of these trends and embrace the implications and opportunities that they will give rise to in the coming decades". He also advises them to "be prepared to take risks that will allow you to do what you are good at".

Should option pricing models such as Black-Scholes be used, even when some of the assumptions behind them do not hold for assets which are not traded? Turnbull notes that assumptions of ideal conditions do not really hold for any asset, so what we are really talking about is a difference in degree, rather than a difference in kind. Ultimately, good models can provide powerful insight. Options appear all over the financial landscape, and the Black-Scholes option pricing framework is valuable for understanding the nature of those options. That also applies to the options embedded in illiquid assets, though of course we are departing further from the idealised conditions of the theory. "Does that mean the formula will deliver the right answer to us on a plate without us engaging our minds?" he asks. "Fortunately for us, it does not. The work of actuaries and other financial professionals is to explain the departures made from the solution to a theoretical problem, to make it applicable to the practical situation."

We turn to Solvency II, and whether it gets the principles of capital modelling right. Two of its key original aims included moving towards a market-consistent valuation balance sheet, and from a rules-based to a principles-based capital requirements assessment approach. In Turnbull's opinion, neither of these objectives have quite been achieved to the extent that would have been hoped. This is possibly because policymakers' appetite for those objectives has weakened since the global financial crisis of 2007-8.

If Turnbull could make one radical reform to Solvency II, it would be to change the internal model approval process so that, instead of approval from the regulator being required through a private submission process, the model would be made publicly available to such a level of detail that actuarial peers could form an informed view of whether the model and its assumptions were reasonable. This would alleviate the burden on the regulator, and help to circumvent the game of second-guessing what the regulator wants. In the past, this type of approach was sometimes referred to as 'freedom with publicity'. As Turnbull says, "Transparency is going to be key to maintaining public trust in the actuarial profession in the future and to (internally and externally) assuring the quality of our expert judgments. We need to embrace it."