GM: Top of the crops?

Has the EU got it wrong on genetically modified and gene edited crops? Nigel Halford investigates 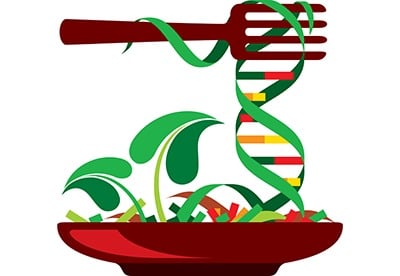 The genetic modification of plants is not a new technology: the first genetically modified (GM) plant was reported in 1984, the first commercial GM variety (a tomato with improved shelf-life) was launched in 1994, and the first major GM commodity crops were in the field in 1996. 'Genetically modified' refers to a plant whose genome, comprising several tens of thousands of genes, has been changed by the artificial insertion of an additional gene or small number of genes. Moving single genes into a plant cannot be done via conventional breeding, and genetic modification also allows plant breeders to use genes from any source in nature - or even genes that have been made in a test tube.

Since the mid-1990s, the use of GM crops by farmers around the world has risen rapidly, and by 2018 they were cultivated on more than 190m hectares, or about 12% of global crop land. Genetic modification is now a well-established technique in plant breeding, and GM crops have had an excellent safety record through a generation of consumption. GM cotton and soybean varieties have become so popular with farmers that approximately 80% of these crops are now GM.

In contrast, the area of GM crop cultivation in the EU has hovered around the 100,000 hectare mark since the 1990s - a tiny fraction of the global total. That is not to say that the EU does not use GM crops: in the first 12 weeks of the 2018-2019 marketing year, for example, the EU imported more than 2.8m tonnes of soybeans, almost all supplied by countries that cultivate predominantly GM varieties. These soybeans would almost certainly have been used for animal feed; indeed, EU animal feed production has been heavily dependent on imported GM crop products since the early 2000s.

How did we get into this situation?

The EU GM approval process is based on Food and Feed Regulation (EC) No 1829/2003 and Regulation (EU) No 503/2013, drawing on Directive (EC) No 2001/18, which defines a genetically modified organism (GMO) as an organism in which the genetic material has been altered in a way that does not occur naturally. The authorisation procedure comprises risk assessment by the European Food Safety Authority (EFSA)'s GMO Panel and risk management by the European Commission. Once EFSA has issued its opinion, the European Commission makes a draft decision that is then voted on by the Standing Committee on Plants, Animals, Food and Feed (PAFF). The representatives on PAFF are not scientists, and the qualified majority voting system means that proposals can be blocked relatively easily. As a result, only two GM crop varieties have been authorised for cultivation within the EU to date. The first is a GM maize (MON 810) that carries an insect-resistance trait, which was authorised in 1998 and has been cultivated ever since, predominantly in Spain. The second is the Amflora potato, which produces a type of starch that has improved performance in some industrial processes. Amflora was authorised for cultivation in 2010 but is no longer available because its maker has withdrawn from crop biotechnology in Europe. Meanwhile, new GM crop varieties are being developed elsewhere that benefit from herbicide tolerance, insect resistance, disease resistance, drought tolerance, improved shelf life, reduced bruising, better nutritional properties and storage characteristics, and even improved food safety. Many of these traits make the crop more resilient, less likely to fail, and less likely to suffer loss of value due to, for example, a late season weed infestation and contamination of the product with weed seeds. This means peace of mind for the farmer and the farmer's insurer. The EU is lagging behind:  no GM crops are being developed specifically for European conditions or the European market, while the agricultural biotech industry is focused on obtaining consent for import of more GM crop products into the EU (difficult but not impossible to obtain) rather than for cultivation within the EU (close to impossible to obtain).

GM was not the last gene-related revolution to sweep through plant breeding.  The next was gene (or genome) editing, which is already in full swing. Gene editing is an umbrella term for several techniques that make targeted changes (mutations) to an organism's DNA. The best known of these techniques is CRISPR, but there are several others. In the simplest use of the technology, a gene is knocked out, although other more complex applications continue to be developed. It is different from GM in that, by the end of the process, a gene edited plant has a mutation in its DNA - but does not contain any additional genes.

Mutagenesis is not novel: it occurs naturally, of course, and since the 1950s scientists have used chemical and radiation treatments to induce mutations in crop plants. The difference between these older techniques and gene editing is that tens of thousands of mutations are induced in each plant, and the mutations occur in random positions. Thousands of seeds are treated and the plants that result are screened for useful changes. Varieties carrying mutations induced by chemical or radiation mutagenesis had been in use for decades when EU GMO regulations were being drawn up. They are clearly GMOs as defined by Directive 2001/18, but were granted a 'Mutagenesis Exemption' (Annex IB of Directive 2001/18), meaning that they do not have to go through the GM risk assessment process before cultivation and marketing. 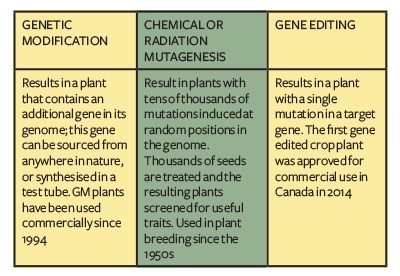 To exempt or not to exempt?

There has been much debate within the EU over whether gene edited plants should be considered GM or not. This is the wrong question: gene edited plants are clearly GMOs according to the EU's broad definition. The correct question is: should gene edited plants get the same exemption from the GM risk assessment process as plants produced by chemical or radiation mutagenesis? For scientists, the answer is yes, because making a single mutation in a target gene is clearly no riskier than introducing tens of thousands of random mutations. Unfortunately, in July 2018 the European Court of Justice (ECJ) came to a different conclusion. The ECJ was issuing an opinion (Opinion Case C-528/16) on proceedings brought by Confédération Paysanne, a French farmers' union, and others, who sought an annulment of the 'Mutagenesis Exemption'. The judges rejected an annulment but stated that the exemption did not apply to organisms obtained by gene editing.

The EU still has no formal policy on gene edited crops, and the ECJ judgment represents the legal position. In contrast, the US Department of Agriculture has stated it will not regulate gene edited crops at all unless a plant pest is involved. The basic application of editing to knock out a gene will also be unregulated in Argentina, Brazil, Canada, Chile, Colombia, Australia, Israel and Japan, and many other countries are developing similar policies.

The ECJ ruling on gene edited crops cannot be allowed to be the basis of the EU's or UK's policy. If it is, there will be no investment in gene editing techniques for crop improvement, the competitiveness of the EU and UK plant breeding industry will fall even further behind, and there will be a loss of scientists who want to work with the latest techniques. My own team is using gene editing to reduce the potential for acrylamide, a carcinogenic processing contaminant, to form in wheat-based foods. This should be of interest to actuaries working in life and health fields. If the current regulatory situation prevails, it is highly unlikely that the products of that research could ever be brought to market. As we are already seeing with GM crops, therefore, the EU's position is actually hampering efforts to improve food safety.

CRISPR and related gene editing tools are precise, easy-to-use techniques that will transform plant breeding and other sectors of the biomedical sciences. This will happen around the world regardless of what the EU and UK decide to do. The EU and UK should recognise that fact and work towards policy alignment with other countries, based on sound science.