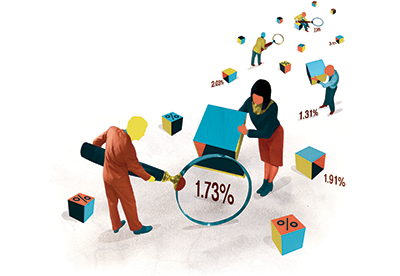 In 2017, the FCA suggested that Interbank Offered Rates (IBORs) be discontinued beyond 2021 and encouraged market participants to plan for new reference rates. The IFoA's Working Party for Libor Reform was established in April 2018 to investigate the key issues, assess potential impact on actuaries' practice areas, and increase awareness.

Fall-back rates are the relevant risk-free rates that would be adopted if the relevant IBOR rate was no longer available. The outcome of the International Swaps and Dealers Association's (ISDA) consultation on fall-back rates resulted in support for the 'compounded setting in arrears' rate as the methodology for floating leg interest fixing, with the adjustment being calculated under a historical average approach. The latest consultation closed at the end of October and explored two options for the spread adjustment: median approach with five-year lookback and trimmed mean with 10-year lookback. The ISDA consultations have covered Libor in British pounds (GBP), US dollars, Euros, Swiss francs and Japanese yen, among others. This consultation concerned the ongoing requirement for term risk-free rates (interest rates for any period beyond overnight) in the GBP market given that the new reference rate, SONIA, is an overnight rate, whereas financial products in the UK typically reference three-month or six-month rates. Term SONIA Reference Rates would seek to represent the market's expectation of the average value of SONIA over a specified tenor.

In general, pension funds followed the initial advice given by the Bank of England and FCA's Working Group on Sterling Risk-Free Reference Rates:

Pension funds typically have direct exposure to Libor via interest rate swaps held on a segregated basis. Although most will likely move to trading new SONIA-based interest rate swaps (or gilts), and many may move some or all of their existing back books, there will still be a legacy of Libor swaps. Pension funds need to stay on top of the issue - using governance wisely, asking investment managers for updates and monitoring the transitioning of benchmarks away from Libor.

In response to a 'Dear CEO' letter issued by the PRA and FCA in September 2018, which asked insurers to provide details of their risk mitigation plans in this area, insurers' approaches for dealing with Libor reform have been elevated. The risk now is that the transition may be treated as enterprise-wide, rather than as a series of localised projects led by different departments.

The most significant exposure arises from the valuation of the liabilities, as the regulatory (Solvency II) discount rate is currently linked to Libor. Unfortunately, there is still little direction on the substance or timing of communication of the future risk-free basis. Nevertheless, insurers are focused on the balance sheet impact of the change, with concern that a move to a (lower) SONIA-based discount rate could result in a jump in the value of the liabilities.

Many insurers have exposure to Libor within asset portfolios from interest rate swaps. However, the transition away from Libor contracts here is hampered by uncertainty around the future risk-free basis. As a result, insurers have been more measured in their approaches, for example by limiting new trades to non-Libor contracts. They are also focused on the ISDA consultation on the setting of fall-backs, as some might consider the option of retaining Libor-based swaps to support 'back-books'.

Insurers have multiple models, tools and reporting systems based on Libor rates or Libor yield curves. Wider implications include renegotiating reinsurance collateral arrangements. Other investment products with return or income pegged to Libor include money market instruments, floating rate notes and securitised instruments. In theory, the Libor reference could be translated into an adjusted SONIA rate. A broad move to SONIA-referenced asset products presents challenges, such as consistency between the approach used for the relevant asset and that used for any derivatives used to hedge the floating rate.

In September, Lloyds became the first commercial bank to issue a SONIA-linked bond, following the European Investment Bank's issue of a five-year bond linked to the reformed SONIA benchmark. Momentum is gathering, but there is a lot of work to be done before the loan market is ready for LIBOR withdrawal - and widespread nervousness in the corporate world.

This article appeared in our December 2019 issue of The Actuary.
Click here to view this issue
Filed in:
12
Topics:
Regulation Standards