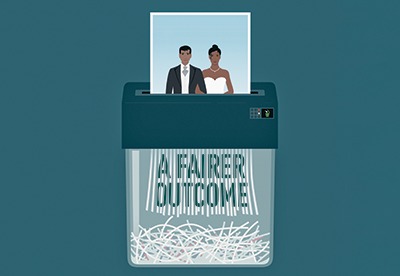 In the UK, pensions on divorce often work well: the cash equivalent (CE) is readily available to divorcing couples, and a pension can be split between them, using that measure to create a clean break. In many cases, and especially when there are only defined contribution (DC) pensions, this is transparent, fair and consistent.

However, in defined benefit (DB) cases there can be pitfalls resulting from differences in valuation when the CE is used as the only measure. In cases where couples offset the pension (one party keeps their pension in exchange for a lower share of other marital assets), it is unclear whether the CE is the right measure. Offsetting is much more common than pension sharing. Expert advice, often from an actuary, can be taken to address these difficulties. Unfortunately, the availability of expert advice is not sufficient to solve the problem. The Nuffield-funded study Pensions on Divorce (www.nuffieldfoundation.org/pensions-divorce) found a lack of confidence among practitioners in the field, poor quality pension disclosures and a large proportion of potentially unfair outcomes. The Pensions (on divorce) Advisory Group (PAG) was formed to address this. This summer, after two years' work and a consultation on its draft reports, it released a guide to good practice in England and Wales. PAG also conducted focus groups with pension experts and family lawyers, carried out a survey and received feedback on blogs and presentations around the country.

All practitioners in the area of pensions on divorce will need to be familiar with the guide. Pensions actuaries will also benefit from familiarity with the issues addressed.

Why not just use the CE?

The reasons a CE doesn't always work might not be obvious, so consider an example. Suppose a couple - let's call them Marge and Homer - are getting divorced. Homer has a DB pension from his job, while Marge has no pension. Understandably, neither really knows what Homer's pension might be 'worth' when compared to other assets. Their immediate focus is on the family home, custody and other issues. The only readily available valuation of Homer's pension is a £100,000 CE, so they agree to split that 50:50. Marge's £50,000 share goes to a DC pot with an external provider but, once the dust settles, it becomes apparent that it is likely to buy a far smaller pension than Homer's residual 50% of the CE.

What has gone wrong? The scheme's CE is a reasonable reflection of the funds it needs to hold to finance Homer's accrued pension. The trustees are not obliged to offer Marge a pension in their own scheme in respect of her 50% share - only a transfer. If the pension is shared, and Marge is expected to buy an annuity, there is a loss of total pension income because of the additional expense of buying an annuity on the open market compared to the funds Homer's scheme expects to need to finance the pension. The main issue is that the valuation measure used was Homer's CE, and that measure is not consistent with the DC valuation; the loss falls wholly on Marge.

Scottish Widows' Women and Retirement 2017 report suggests almost three quarters of divorcing couples do not consider pensions at all. Marge and Homer are already in a fairer position than such couples - fewer than one in six divorces include a pension sharing order.

Pensions on divorce is a serious issue in the UK, with a public interest aspect for the IFoA. According to ONS statistics, around 100,000 couples divorce in England and Wales each year. After any family home, pensions will generally be the largest assets. If pensions are not carefully considered or are treated inconsistently, it will most often be wives who lose out. This is borne out in studies by Age UK, the Chartered Insurance Institute and Scottish Widows.

The expert practitioners are a broad church. The PAG report calls them pension on divorce experts (PODEs). Many are IFoA members, some are non-IFoA members who use the title 'actuary', others are independent financial advisors, and still others are comfortable that they have acquired appropriate skills via other routes. This is muddied by the widespread use of 'actuarial report' as shorthand for the advice of a PODE who may or may not be an actuary.

The question of the correct competence and skills was essential for the PAG, and of particular interest to the IFoA and its members, since this field has contributed a disproportionate number of cases to our profession's disciplinary scheme. That fact does not reflect the valuable, expert and professional work undertaken by PODEs more generally. It seems likely that there are two contributing factors. First, the quality of Actuaries Code-type skills, especially timeliness, sometimes falls short, leading to financial and emotional consequences for the individuals affected. Second, it would be easy for an unwary actuary to wrongly assume that they have the necessary breadth of competence for this specialist area.

The PAG report addresses this in three ways:

It recommends that membership of professional bodies, the existence of a meaningful complaints procedure, professional indemnity insurance and peer review procedures are in the scope of the Statement of Truth. It also recommends that the solicitor (or any other person) instructing the PODE should check that such a statement will be included and put such relevant details before the court before the PODE is appointed.

However, the PAG report does not recommend that PODEs must be members of a professional body. There is a difficult balance to be struck here, and the IFoA's response to the PAG consultation last summer reflected that. Membership of a professional body brings accountability, credibility, training and standards of professionalism that are valuable in a role where there is a public interest aspect. However, unless a new body were created (which was judged unfeasible) or membership of an existing body extended, then recommending membership of a professional body could create obstacles to competent PODEs practising. There are not a large number of PODEs, and it is in the public interest for divorcing couples to have access to advice from any competent practitioner.

The list of competencies is not short. Some, such as an awareness of APS X3, are easy to meet and would be necessary for IFoA members anyway. Others, particularly breadth of pensions knowledge and divorce procedure, are more onerous. Anyone considering advising in this area would need to be mindful of the competences, but equally, there is benefit to the public from an active and competitive market in PODE advice and it wouldn't be appropriate to create obstacles for competent practitioners. I encourage actuaries entering the field to use Appendix D of the report to consider whether there are additional skills they might need, and how they might acquire them.

Offsetting and other case

The example of Marge and Homer is a simple one. In practice, issues are more likely to arise through the existence of multiple pensions and the choice of a consistent method to make comparisons between them. Actuarial assumptions are required, as is an allowance for features of the benefits that may not be captured by the CE, such as service-related entitlements to unreduced pension at an earlier age. The PAG report provides a steer for a consistent approach. This should reduce the risk of 'expert shopping' - the choice of an expert whose methodology is expected to be favourable.

The thorniest problem is offsetting. Implicit or explicit offsetting is much more common than pension sharing. The same issues of comparison arise, except here the comparison is not against a dissimilar pension but different assets entirely, usually a home.

All else being equal, we prefer money in our pocket to money that may be inaccessible for many years - 'utility' attempts to make an allowance for that as a reduction to the value of the pension. This is a subjective judgment, and contingent on the circumstances of each case.

The PAG report gives a steer on each of these points - valuation, tax (15%-30%) and utility (0%-25%) - but states that utility is not a matter on which the PODE should be expected to comment.

The report sets out the rationale for those ranges.

There is no substitute for expert knowledge and judgment, and the PAG report doesn't 'solve' pensions on divorce or provide a simple recipe that works in every case. We hope the report will promote high standards of consistency, rigour, professionalism and fairness in this field.

Awareness and communication are also important, and the next stage for the PAG will be to produce a layperson's guide for the benefit of divorcing couples. This is planned for April 2020.

How to compare different types of pensions with other income and assets is a fundamental question for PAG, but one that is thankfully being addressed more widely for other purposes. No doubt this is an area that will move quickly - and pensions on divorce will need to change with it.

This article appeared in our December 2019 issue of The Actuary.
Click here to view this issue
Filed in
12
Topics
Pensions