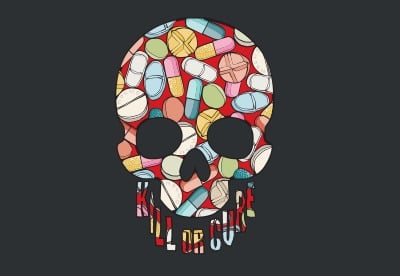 "One sometimes finds what one is not looking for," said Sir Alexander Fleming, the discoverer of penicillin, referring to his detection of this first major antibiotic while engaged in research on bacterial behaviour. The serendipity was extraordinary - the discovery only occurred thanks to a bizarre combination of circumstances, including the research engaged in by the laboratory downstairs, Fleming absent-mindedly leaving a petri dish outside the incubator, its non-disturbance while he went on holiday, and a sequence of unusually cool days followed by warm ones. This is why penicillin had to be 'rediscovered' 10 years later by Harold Florey and Ernst Chain in Oxford.

Since that discovery, followed by the development of mass production techniques and the identification of many other antibiotics, we have come to take for granted that all infections can be successfully treated if diagnosed in time. By contrast, up until the 1950s, infectious diseases such as tuberculosis, pneumonia and sepsis were the primary causes of death among the middle aged in the UK.

However, during the past 25 or so years, this rosy outlook has darkened: bacteria have developed increasingly strong resistance to antibiotics, and the pharmaceutical industry has not produced any major new ones.

Because of actuaries' concerns about the possible morbidity and mortality impacts of antibiotic resistance (ABR), and the lack of any widely available modelling framework, a working party was set up under the Health and Care Board with the aim of developing a simple modelling framework to help actuaries better quantify plausible ABR impacts. Our findings were presented in a Sessional Paper presentation in Edinburgh on 25 February 2019, and the full paper and associated models were published on the IFoA website over the summer.

We agreed at an early stage to construct a model that met the following criteria:

The model was parameterised with regard to Escherichia coli (E. coli), a relatively common bacterium that can cause intestinal infections leading to diarrhoea, abdominal pain and fever. More severe cases can lead to bloody diarrhoea, dehydration and kidney failure. Our model was based on third-generation cephalosporin-resistant E. coli. The model provides the flexibility and data sources to allow for four other bacteria of particular concern to be modelled: 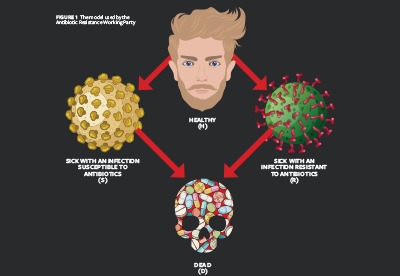 The primary reasons for choosing to concentrate on E. coli were better availability of data, and also the recent statistics showing it to be one of the worst 'offenders' with a worsening trend (Figure 2, below). 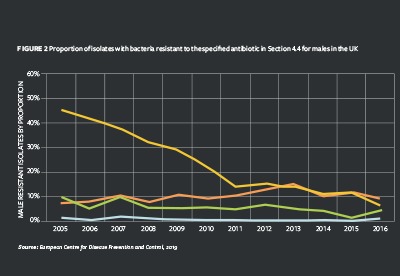 The parameterisation was done using UK data, mainly from Public Health England, and supported by data from the European Anti-Microbial Resistance Surveillance Network produced by the European Centre for Disease Control. We also used research papers for various aspects, for instance the key parameter in the model of relative mortality between resistant and non-resistant infections.

Our work found that in a developed country, such as the UK, the impact of ABR is likely to be very minor. Even in the extreme scenarios considered, ABR deaths would be almost negligible compared with major causes of death such as cardiovascular disease and cancer. The low impact of ABR in the UK would primarily be due to the well-developed health infrastructure, in particular vaccination programmes and good general public hygiene and sanitation. Conversely, in less developed countries where infectious disease is already a major cause of death, ABR would pose a much greater challenge.

Our central scenario assumed that resistance increases in a linear manner, with no change to the infection rate. This leads to an increase in mortality in the 45-64 age range of 0.01% (multiplicative, not additive) in 20 years, with a cumulative increase during the 20-year period of 0.2%.

Table 1 highlights two of the more extreme scenarios considered in the results section (where the ranges relate to variation of results by age band).

Although the individual scenario parameter choices were very subjective, the variety of scenarios considered should provide a generally useful range of plausible results.

We also compared the increased ABR mortality from the model projections against several relevant comparators - in particular, AIDS/HIV-related deaths, deaths relating to adverse drug reactions (ADR), and the UK's 'extra deaths' of 2015. 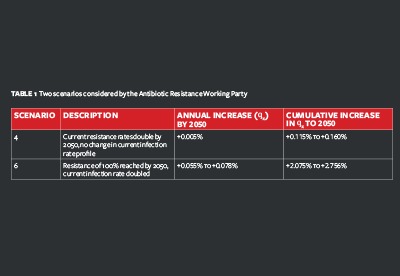 In addition to the above modelling on direct infectious disease mortality impacts, we also considered (more approximately) possible impacts of ABR on preventative use of antibiotics, for example as part of cardiovascular surgery. This research indicated that several thousand extra deaths might be expected in the UK under high ABR scenarios in around 20 years.

The 2016 O'Neill Review on Antimicrobial Resistance (AMR) concluded that the worldwide impact of AMR could be significant by 2050 if action were not taken, with additional deaths across Europe attributable to AMR estimated to be 390,000 by 2050. Our model, even in an extreme scenario, suggests that the relative impact in the UK would be of an order of magnitude less than this.

From a life insurer's perspective, even reinsurance actuaries worried about the risk to their in-force term books can feel generally comfortable, given a typical policy duration of five to 10 years, allowing for lapses. The situation in less developed countries, though, is much less sanguine - where infectious diseases are currently a major killer, the problem of ABR is clearly going to be far more material than it seems likely to become in the UK.

The Antibiotic Resistance Working Party's report and associated models are available at bit.ly/2NH0Z77

Matthew Edwards is chair of the IFoA's Antibiotic Resistance Working Party and a director of Willis Towers Watson.

This article appeared in our December 2019 issue of The Actuary.
Click here to view this issue
Filed in
12
Topics
Health care