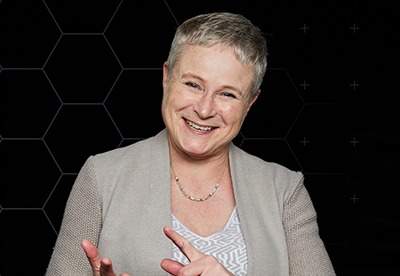 Deborah Ashby is director of the School of Public Health at Imperial College London, as well as being president of the Royal Statistical Society (RSS). She became interested in medical statistics during her mathematics degree at Exeter University on realising that, as she puts it, "the skills I had could do something useful in that field".  Her work led to an OBE for services to medicine in 2009, having contributed not only to research but also to drug regulation.

I meet Ashby at St Mary's Hospital in London, where Roger Bannister and Alexander Fleming, among others, were researchers. I ask about her main concerns regarding public health. Without hesitation she names her top three: obesity, antimicrobial resistance and the issues raised by an ageing population.

While the risks posed by obesity are becoming clearer in the UK and globally (diabetes, heart disease, cancer), finding solutions is more difficult. "It's far harder to even think what to do about it," Ashby says. "The messaging is complicated. I was brought up on Susie Orbach's book Fat Is A Feminist Issue. People are feeling incredibly vulnerable on the subject." We also know that obesity in the UK correlates with those in lower socio-economic groups. "It's not fair to say: 'Why don't you do something about it? Why don't you learn to cook properly?', because the struggling mother with three kids will say: 'You try being me.'"

In Ashby's opinion, focusing too much on individuals, rather than structural issues, leads to incorrect solutions. "If you're living in a tower block in a city and there is no supermarket nearby but a pizza takeaway instead, what are you going to do? The economics of food is absolutely shocking."

The food we eat is only part of the problem; Ashby says we should be doing more to make exercise a normal part of daily life. "Just having cities that are easier to walk and cycle in would help people be more active and enjoy wider benefits as well."

Combining education, food economics and social infrastructure will start to drive behavioural and cultural aspects, too. "My mother stopped smoking when she realised that instead of there only being two non-smokers in the room, she was one of only two smokers in the room," Ashby says, by way of illustration.

Our ageing population also has huge implications for public health. Ashby is reconciled to the challenges. "The older people get, the more they tend to have diseases - and managing that becomes much more complicated. Never mind the whole pension issue! I spend half my life worrying about pensions, both here and at the RSS, because basically we can't afford them anymore."

An important part of public health and the ageing population issue is dealing with social care. While progress in parliament and the senior civil service has stalled because of Brexit, for Ashby there are signs for optimism. "The UK's new chief medical officer, Chris Whitty, has a strong public health background. He's very conscious of the changing demography. Policy is going in the right direction."

Across four faculties at Imperial, including engineering and the business school, there are more than 100 academics currently working as part of the Antimicrobial Research Collaborative @ Imperial. These include not only public health specialists and drug researchers, but many other disciplines, too: behavioural specialists and business analysts, for example.

Dealing with the unexpected is a crucial part of public health. We talk about 'black swan' events, such as the discovery that AIDS was an infectious disease. "The development of drugs, especially antiretrovirals, transformed that from being a fatal disease into a condition people live with as they would with diabetes," Ashby says. "I use that when I'm teaching medical students or public health people to say, 'We're not teaching you facts. We're trying to teach you how to go about solving problems, because HIV wasn't even a known problem when I first started as a young researcher.' But we had the tools, essentially from cancer and other diseases, that meant we knew how to investigate it and then do something about it."

Ashby has been heavily involved in drug regulation over many years: "Every month, I spent two days making decisions about drug regulation within the UK, and I still do at some European level while we're still in the EU. Imperial really likes that interaction with the outside world, civil service with industry, and so most of us are balancing a number of different strands."

At both the RSS and the School of Public Health, the influence of technology is changing the landscape, with clear opportunities and responsibilities for researchers. "I absolutely think every time I go to the GP that this should feed into improving healthcare for myself and future generations. I regard it as a social contract; I expect the best healthcare they can reasonably give me and my data is part of what I put into that system. It's almost like taxation." But again, reality falls short of the ideal: "I had a minor problem, had to go to one hospital for a consultation and then the related scan at another. The struggle it takes to get all these scans in different places, and that's with hospitals that are all connected to one another it's farcical!"

However, progress is being made. Ashby reflects on how far we've come in such a short space of time, especially around automated image processing, which could lead to huge advances in areas such as skin or eye cancer recognition. This comes with responsibilities when thinking about face recognition, for example. "What's interesting with technology is that it's like money. It can be used for great good or great evil. The technology itself is actually neutral. There are so many new possibilities, so we have to think about what's the correct use."

The influence that social media has on public health is mixed - it's a really effective communication tool, but neutral when it comes to the facts. Anti-vaccination and other misinformation movements have thrived. Is this a new concern? "I think these things have always been a problem - social media exacerbates and magnifies them, but it's not that they're fundamentally new problems."

On anti-vaccination campaigns, Ashby comments that prevention is always a more difficult conversation than treatment. "If you've got cancer, you might not want a drug that's going to make you sick, but actually you'll have a discussion and you'll probably take a hard decision. Prevention, when you're unlikely to get meningitis C, is entirely different, and when it comes to being seen to do something for a young child it's really emotive stuff.

"I think what you can do is communicate. I was involved in the meningitis C campaign and that was the first one that was done proactively. Up until then, vaccinations had been rolled out and there'd be one or two unfortunate incidents the media would reverberate and people would take fright. What they did with meningitis C was very clever. They talked to the media, got them involved in the campaign and reported on what the condition is like, because people need personal stories."

Of course, as president of the RSS and director of Imperial College's School of Public Health, Ashby has quite a lot on her to-do list that isn't linked directly to public health. There is, however, a lot of crossover between the two roles. "We're a very numerate, data-intensive School of Public Health; the Royal Society has its origins in what is essentially public health and collecting data."

The focus of the School of Public Health is currently three-pronged: research, teaching and external relations. "For Imperial, research is what it does at scale. We are top in the rankings. For us, it's pretty much our bread and butter."

The connection between her roles certainly seems to be enriching both institutions - and, of course, society as a whole. As Ashby says: "Balancing everything means a lot of variety. Every day is different, which is absolutely great."

This article appeared in our November 2019 issue of The Actuary.
Click here to view this issue
Filed in:
11
Also filed in:
Interviews
Topics:
Risk & ERM