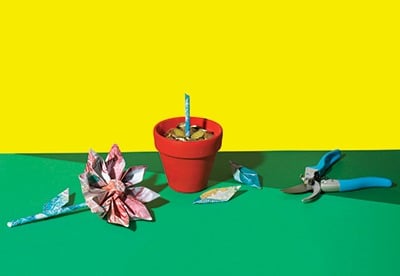 
In a world of defined contribution (DC) pensions, many people in the UK are not building up enough savings to provide for an adequate retirement. How can we engage young people to plan early, since starting too late makes the cost prohibitive? That is the challenge addressed by the IFoA's Saving for Retirement Working Party, in our paper Saving for Retirement: Rules of Thumb.

The IFoA has advocated a 'bottom-up' approach to assessing pension adequacy, in which the first step is to define the objective - the standard of retirement someone aspires to, and thus the required pension. This can encourage savers to explore how they can achieve their goals. In Australia, this approach is promoted by publishing target retirement incomes, based on research into the basket of goods and services a retiree typically requires, for two different retirement lifestyles. In October, the Pension and Lifetime Savings Association published similar Retirement Living Standards for the UK.

Once the target income is chosen, there are plenty of tools available to calculate how much needs to be saved in order to achieve that target - but not enough people are using them. Rules of thumb aim to bridge that gap: heuristics that offer simple guides to young savers which can be followed in order to help turn inertia into action.

The Lifetime Pension Contribution (LPC) tells people what a sensible pension contribution would be over a working life. For illustration purposes, we based the LPC on a target pension of £18,000 a year, or about two thirds of average UK earnings.

We assumed retirement at 68, the state pension age for current young savers. A full state pension is about £8,500 a year, leaving £9,500 a year to be funded from pensions and other savings. We assumed annual increases in both the monthly contributions and target pension in line with average UK earnings, and that the pension in payment is indexed to inflation, with no survivor benefits.

The calculated LPC assumed payable from age 22 was £525 per month, or about 23% of average UK earnings. The old rule of thumb of contributing half your age (as a percentage of earnings) when you start saving has changed to contributing your full age in order to provide a decent retirement income. £525 per month is likely to be unaffordable for many people, and suggests that retiring later than 68 might need to be considered; I show later another rule of thumb to help understand how much cheaper it is to retire later.

We envisage a single LPC for maximum impact, which could be promoted in the media alongside well-known market indices so that it becomes ingrained.

We developed further rules of thumb to understand the cost implications of alternative retirement ages. The first is that the LPC reduces by £55 per month for each year retirement is delayed beyond 68. For example, at age 71 the LPC becomes £525 - (£55 x 3) = £360 per month, or around 16% of average UK earnings - a much more affordable level of contributions. 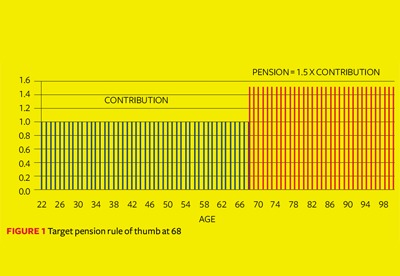 Am I on track?

We developed one final rule of thumb for savers as they get older to check if they are on track to meet their retirement objectives: the 'benchmark' fund derived from the expected accumulation of fund, as shown in Figure 2. At age 52 the benchmark fund is the annual contribution x (52 - 18) = £214,200.

The actual fund is lower than the benchmark fund, indicating that the saver is not on track. The pensions dashboard will be important to help aggregate the total fund across what may be multiple plans for comparison with the benchmark fund. 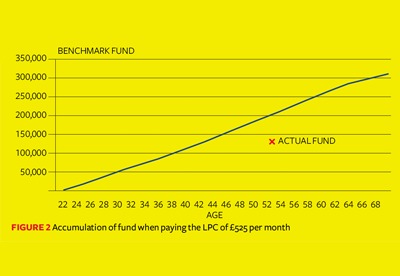 Rules of thumb can go no further in guiding people, and bespoke tools are needed to evaluate the different options for getting back on track: pay more; choose a lower target pension; retire later; a combination of these; or wait to see if market conditions improve.

Our simplified stochastic modelling illustrates the considerable uncertainties faced by a saver in a DC world. For example, Figure 3 illustrates a saver paying the LPC from age 22 to 68, resulting in disposable income before tax of about £21,000 and the very wide range of pensions that the resulting fund at age 68 could purchase, with a significant risk of a pension well below the target of £18,000 a year. 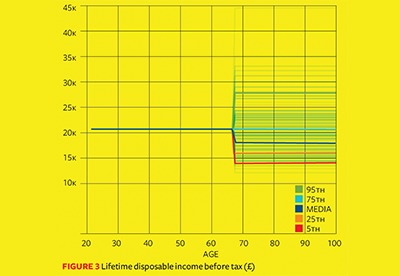 A wide range of assumptions are used across the pensions industry to estimate how much people need to save for retirement, and we suggest a greater consistency would be helpful to pension savers. Rules of thumb might act as a catalyst to help make this happen.

Assumptions affect the balance of risk and reward, as opposed to the ultimate cost. Our rules of thumb are based on an estimated cost using assumptions we judged suitable for a medium risk investor in the period before retirement, and to provide a high degree of confidence that the money will not run out in retirement. We deemed this appropriate for our target audience of rules of thumb: non-advised people who will be substantially relying on pension savings to achieve their target retirement income.

The burden of cost

It is costly to provide a decent retirement income, and our LPC can help to highlight the point - £525 per month, or about 23% of average UK earnings, is a lot of money.

One reason for the high cost of pension provision is the very low interest rates that currently prevail; real government bond yields of about -1.5% a year when we prepared the report, and which have since fallen further. A modest rise in interest rates would substantially reduce the cost.

Another factor is that the decumulation market is inefficient. Individually purchased annuities are currently around 15%-20% more expensive than the bulk terms typically available to defined benefit pension schemes, while drawdown products lack the pooling of investment and mortality risks that would make DC pension provision more affordable and predictable. The growth of master trusts and potential introduction of collective defined contribution schemes can hopefully address these issues.

We envisage that our LPC and other rules of thumb would be reviewed periodically, for example annually, in order to keep them in the news and to reflect changes in market conditions or in the decumulation market. For example, as interest rates rise, the LPC will fall and this could be big headline news - pensions have become cheaper!

Employers have an important role to play in making pensions more affordable. In the UK, automatic enrolment (AE) has been hugely successful in increasing the number of pension savers, but the minimum required contributions are only 8% of earnings above about £6,100 a year, of which the employer's share is 3%.

The minimum contribution rates required by AE were only intended to be sufficient to provide a basic level of retirement income - less than many people's aspirations. The LPC can help to ensure that this is widely understood, thereby encouraging more employers to increase their contributions beyond the AE minimum level - perhaps by matching employee contributions up to a limit. Through competitive pressure, this could quickly become the norm.

We believe rules of thumb can grab people's attention, encouraging them to take more interest in their pension planning. Their promotion might be enhanced through a simple, independently branded smartphone app.

Rules of thumb can also help stimulate debate about the high and uncertain cost of pension provision in a DC world, leading to actions that alleviate the problem. With savings at such a low level, there is no time to lose!

The Saving for Retirement Working Party's paper (bit.ly/2SzedmP) was presented at a Sessional Meeting in Staple Inn on 20 May 2019. The IFoA has issued a related policy paper to be found at: bit.ly/IFoAsavingsgoals

This article appeared in our November 2019 issue of The Actuary.
Click here to view this issue
Filed in
General Features
Topics
Pensions