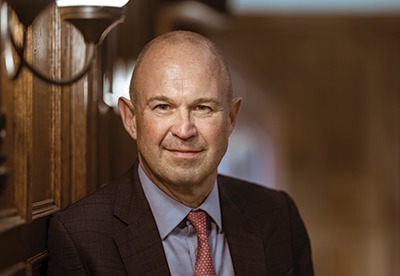 Charles Counsell OBE, the man behind the launch of automatic enrolment (AE) in the UK, came to the pensions industry relatively late in his career.

Having graduated in economics, and with an MBA behind him, Counsell decided to go into consulting. "My firm had just won a piece of work to do a major transformation programme, and as a result I developed a career running big change programmes over a number of years, setting up my own consulting firm for a while. I really enjoyed it, working across sectors, both public and private, and internationally. I found that the techniques of doing big change programmes were largely the same, but getting to know the sector is really important."

Counsell's first involvement with The Pensions Regulator (TPR) was in 2005; he worked as a consultant to help establish it from its predecessor, The Occupational Pensions Regulatory Authority. "We called it the culture programme, and were proud that most of the staff made the transformation." He stayed initially for just over a year, but soon returned.

"I became passionate about helping people to save for their retirement, so I came to TPR to set up the AE programme in 2008 and became executive director in 2011," Counsell explains. "AE was perhaps the mother and father of all changes; we were changing the way in which employers had to behave, and getting people into pension schemes for the first time, millions of them."

People said it wouldn't work, with so many employers - a "tsunami" of them - to incorporate into the programme. "I said a tsunami is always a disaster, whereas we have a mountain to climb, which is possible with careful planning and preparation."

A crucial part of the planning was staging, with the largest employers tackled first. "They set the tone for other employers and, as the majority of employees work for large employers, we were able to get more people in quicker. There was a myth that large employers will provide pension schemes. Yes, but not to all their employees, so those not participating in a pension scheme still needed to be put into one where required by AE.

"Our approach was to help employers get it right from the outset," he continues. This involved educating advisors - in the case of smaller employers, accountants or financial advisors. "This is not a community we regulate. When we first engaged with them, nobody had ever heard about AE - but by the time we got to smaller employers, most advisors knew what to do."

The AE team at TPR currently numbers about 100, with some work outsourced. Since its inception, AE has resulted in more than 10 million new savers from 1.5m employers.

Counsell left TPR in 2017 to become CEO of the government-sponsored Money Advice Service (MAS). "For me, there were so many connections with AE: helping people with their financial wellbeing, but in a broader sense than just pensions."

He outlines some of the challenges. "Some 40 per cent of adults think that their approach to budgeting doesn't work; 17.5 million people of working age have less than £500 in savings; more than eight million people are over-indebted; and about half of people with problem debt also have a mental health issue. Financial and physical or mental wellbeing are inter-related, which underlines the importance of MAS, and the Money & Pensions Service (MAPS) into which it has now been incorporated."

So how can these problems be tackled? "We discovered that teaching kids aged four to seven the value of money and how to manage it had a direct positive impact on their ability to do so as an adult." Getting parents to assist has further benefits: "We added a module onto existing parenting classes about how to help kids manage their money, and it was hugely successful. One of the really interesting outcomes was that it had an influence on the parents, with about a 19% reduction in the chances of their becoming indebted."

MAS, with its 170 people, recognised it couldn't do it alone. "The idea of collective impact, or working with others, is fundamental. We also had a big focus on collating evidence about what works."

Counsell re-joined TPR as CEO in April 2019. He shares his personal perspective on the role of the regulator: "Everything we do at TPR is about getting the whole system to work for the saver."

The joint regulatory strategy with the Financial Conduct Authority (FCA) is especially important. "Two themes we are working on together are the customer journey and value for money for the saver and employer," says Counsell. Working with MAPS is also important, given its strong consumer focus.

AE may be fully implemented, but Counsell warns: "We will continue to be tough with non-payment of employer contributions; it's simply not fair on employees, and on competitors who are doing the right thing." The AE minimum contribution of 8% is not enough, and he would like to see employers paying more where they can. Individuals might be encouraged to save more through nudges, and the Pensions Dashboard should also help by telling them how much cash they have built up to date.

Counsell is concerned at the number of transfers from defined benefit (DB) to defined contribution (DC) schemes. "It's a relatively specific set of circumstances where it is right for the individual. There are levels at which you must take advice, but people need to listen to that advice and make the right choice for themselves."

Protecting savers from scams remains a strong focus, and TPR is currently running the ScamSmart joint advertising campaign with the FCA, featuring a jet ski theme. "Someone recently described being on a beach when a jet ski went by and overheard a voice saying 'look, there goes the pension scammer' - so it's clearly having an impact," says Counsell. "In the end, this is about consumer awareness of the risk of being scammed. Research shows that 40% of pension savers are at risk, and a lot of people who think it won't happen to them are overconfident."

Counsell sees DC master trust authorisation as an important development, given that 14.5 million people save into one. "The schemes that people save into through AE must be well governed and financially sound. Thirty-nine master trusts out of 80 have applied for authorisation, which demonstrates that the bar has been set appropriately high." He also believes that master trusts can assist in future consolidation, especially for the many smaller DC schemes.

Trusteeship is another focus for TPR. "Driving up standards is hugely important, and not just for the professional trustee," says Counsell. He is keen to find ways to ensure that trustee training is effective in changing how things are done, and emphasises the importance of diverse trustee boards.

TPR's clearer, quicker and tougher new regulatory approach, Counsell says, "owes much to the lessons learnt from the AE programme." This approach is especially relevant when it comes to DB schemes; there has been a large increase in the number of schemes with which TPR proactively engages at various levels, each with a scheme-specific theme, to enhance their ability to identify issues at an early stage.

The first DB scheme to enter a superfund is expected in 2020. "We are very keen to have legislation to provide for superfund authorisation similar to DC master trusts, rather than just the supervisory role we currently have," says Counsell. "I worry some superfunds won't be sustainable in the long term. However, they are potentially a good thing as an intermediate step to a buy-out with an insurer."

I ask Counsell what we can expect from TPR in the future. "The demographics of pensions has changed, so we will have an increased focus on the saver. We are developing our long-term strategy by working out our aims for pension schemes and the industry, and then our role within that future ecosystem. Working with others, such as the FCA, is hugely important as we seek to have an increasingly cohesive view of the long-term future."

What advice can Counsell provide to young professionals? "Two things, really. I'm very lucky to do a job that I am passionate about - so, do something that you really care about, and if it interests you then you've probably got a better chance of being successful at it.

"Secondly, I started my career out of university working for a brewery, and never imagined I would end up being a pensions regulator. I've had three or four different careers in total, and you can bring the skills that you have learnt in previous careers into your current role. Do what interests you, and then just grab opportunities when they come along."

This article appeared in our October 2019 issue of The Actuary.
Click here to view this issue
Filed in
10
Also filed in
Interviews
Topics
Risk & ERM