Mahidhara Davangere has pursued a unique career path that stretches the limits of the actuarial profession. He tells Sharad Bajla about his priorities, his volunteering work, andwhat motivates him 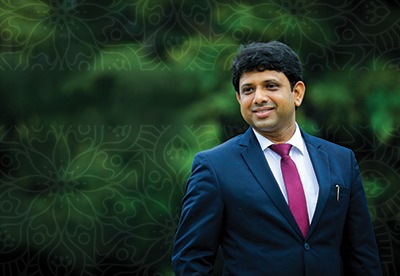 Mahidhara Davangere is an actuary and founder of Pramartha, an India-based risk consulting firm with offices in five countries. He is an active IFoA volunteer and serves on the IFoA Council; he also volunteers for the Institute of Actuaries of India (IAI) and the International Actuarial Association (IAA).

When asked about his education and early career, Davangere doesn't hide his early passion for mathematics and physics as a student. But it was the urge to do something different that led him to explore other options than engineering, which most of his peers had chosen. "Every actuary gets into the profession because of their drive to do something different," he says.

Davangere first heard about actuarial science from a friend who worked in life insurance, nearly two decades ago. At that time, awareness of the actuarial profession in India was low. "I did not even know how it was spelt!" he shares. "Noting the word 'aktury' down on a tissue paper, I enrolled myself for an MSc in mathematics and an MCom in finance, which I thought would help me study actuarial science."

He found himself in the role of an equity analyst at an Australian start-up asset management company, choosing a small company as opposed to a larger, more established business because of the learning opportunities it presented.

"I personally modelled about 250 Australian and South African companies," he says. "I understood what real M&A was. Being in a small company gave me a lot of freedom and I was able to make decisions independently at work."

The IFoA recognised his work studying and projecting financial statements against the 'actuarial experience' requirement, which allowed him to attain Associateship.

On aiming to complete his Fellowship, he admits: "It is not that I didn't try, but my business grew faster than I did. I want to qualify in not just one area of specialisation, but more than one. I'm looking to specialise in banking and data science, when we have such a specialisation. Maybe I'm waiting for that!"

Davangere realised that making an impact requires taking risks, and his college provided his first break into entrepreneurship; he was to conduct a workshop on Excel and financial modelling techniques, which were his strengths. He developed a 10-hour course and began teaching it to MBA students at various colleges.

As demand grew, Davangere left his job and focused full-time on the business, Pramartha. "My aim was notto conduct workshops and teach Excel or modelling," he adds, though. "I wanted to bring together equity research and actuarial knowledge to advise venture capitalists." It took a long time to succeed, since the actuarial profession still had a low profile at the time.

Angel investors provided him with his breakthrough. Now, a typical Pramartha project involves identifying and quantifying systematic and unsystematic risks for businesses. For an infrastructure project, for example,  his firm will carry out scenario modelling, valuations, cashflow projections and probability calculations for various events. "It can be portrayed as a risk technique, but it is basically actuarial work," he says. Today, the company is one of the few Indian firms working in the wider areas of actuarial applications. It uses various financial and actuarial techniques to assess a company's risks across different segments and geographies.

Davangere started volunteering for the IFoA in the early stages of establishing his business. "It gave me the opportunity to network. I met a lot of other members, including a couple of Nobel laureates," he highlights. "I began travelling to attend almost every actuarial conference, in Malaysia, Singapore and other places. I soon began to speak at conferences about my volunteering."

Davangere allots 20% of his working time towards volunteering. "It gives no monetary benefit, but it takes a lot of time. Even the smallest opportunity is a valuable contribution." His volunteering experience is diverse, with commitments including the IAA's Big Data working group, the IAI's Applications of Actuarial Science to Wider Areas working party, and the IFoA's Banking Member Interest Group, as well as its Finance and Investment Board.

In February 2019, Davangere was the first Indian and first Associate to be co-opted into the IFoA Council. As a Council member, he hopes to make a notable contribution to the Council's role of setting the IFoA's strategy and direction.

At the time of our interview, he had just returned from his first Council meeting, where three teams of council members visited Nigeria, Zimbabwe and Kenya before meeting up in Cape Town to discuss their experiences.

Davangere is a strong advocate for actuaries venturing into wider areas, something he believes is shared by many Council members. From his own experience, he thinks that the CERA and CAA qualifications should open more doors for other hopefuls. "Newly qualified Fellows are a bit reluctant to move away from their specialisation. Associateship makes it easier to move between the various areas, and the IFoA is trying to encourage this."

Davangere feels that most students are unaware of the different paths available, and therefore take the traditional qualification routes into common industries. The IFoA is looking to expand into wider areas and encourage international involvement. One of the questions he asks is: "How do we reposition ourselves so that other professions understand us?"

He also believes that greater awareness of the profession at high school and undergraduate levels, and a larger number of university programmes in actuarial science, would help more students join the profession. "In many countries, such as India, Nigeria and Zimbabwe, there aren't many universities that offer actuarial science courses," he says. "These courses can serve as good starting points for an actuarial career."

For Davangere, the IFoA's engagement with international members is especially important because of its large number of overseas students. He hopes to see a further increase in volunteering from the international community. "Student members should have a global outlook beyond their local actuarial body. It is easy to volunteer, irrespective of the region or part of the world you belong to. Time difference does exist,but that is not a major deterrent to volunteering."

He leaves us with these final thoughts: "The world doesn't understand actuaries yet. We need to make them understand. We have the potential to help reduce risks in all industries, notjust in insurance.

There are actuarial exam questions on actuarial techniques involved in building a stadium or the applicability of a Poisson distribution to model accidents on a toll road. But do we really apply these in the real world?"

This article appeared in our September 2019 issue of The Actuary.
Click here to view this issue
Filed in
09
Also filed in
Interviews