Book review: The Past, Present and Future of Tontines, Comparative Studies in the History of Insurance Law, vol. 2

Phillip Hellweges The Past, Present and Future of Tontines will be of interest to historians of life annuities and people who are thinking of incorporating the tontine principle into modern insurance products. 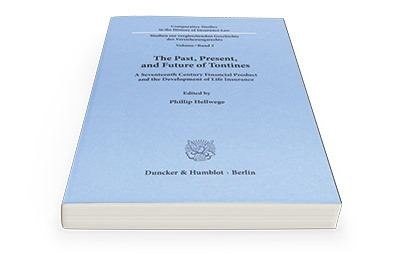 Investors in a tontine bought annuities on their own lives or the lives of nominees. The annuities on deceased lives accrued to the survivors, usually as additions to their annuities. The liability of the issuer remained constant each year until the death of the last survivor, when it ceased altogether.

The book includes a document, with an English translation, that describes a tontine scheme proposed in Portugal by Nicolas Bourey in 1641; it also reviews a Danish tontine plan proposed in 1653 by Lorenzo Tonti, who gave his name to the product. Detailed descriptions are given of the terms of numerous tontines issued thereafter up to the 19th century, in Britain, continental Europe, North America, Latin America and Africa. The book is thus a rich source of historical information, including details of the modifications that were made in successive tontines to remedy the defects in earlier issues. One of these modifications sought to achieve greater equity between the members by allocating them to different classes (in effect, separate tontines) according to their age group, with greater starting annuities in the classes for higher ages. In some cases, tontines were combined with life assurance in order to counteract the capital loss that would otherwise result from a member's early death.

Not all of the tontines succeeded. In some cases there was not enough take-up at the outset to justify continuance, while in other cases the issuer later went bankrupt and was unable to fulfil the contract in its entirety. However, in many instances the tontine remained in existence as planned until the eventual death of the last-surviving member.

One chapter speculates about possible applications of the tontine principle in future life annuity products, for example to provide a higher income in later life in order to help with meeting care costs.

As the book is a collection of chapters by different authors, there is inevitably a degree of overlap and repetition. The editor states that the overall objective was to assess the impact that tontines had on the development of life insurance and life insurance law in Europe. However, he concludes that, in most countries, there was little or no impact.

As the book is written from a legal perspective, it does not deal with the projections that the proprietors of tontines made about the extent to which the income of survivors would rise in future. (Information about some of these projections and their underlying assumptions may be found in Lewin [2003].) With its extensive factual information, much of which is hard to find elsewhere, The Past, Present and Future of Tontines will be a useful reference tool for years to come.