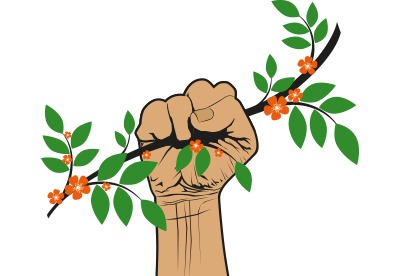 Last Easter's blockades of central London bridges and road junctions by climate activists are a salient reminder that there is still fire in the belly of the UK's environmental movement. While disrupting city centres gets the attention of the media, less widely noticed has been the rising public and private pressure placed on financial institutions by activist groups. This has triggered a radical shift in the attitude of investment funds to fossil fuels.

Only last year, Legal & General pulled its Future World index funds out of one of the world's largest investors, Japan Post Holdings, citing "persistent inaction" to address climate risk. Many of Europe's biggest banks and insurers have announced new or strengthened anti-coal policies during the past 24 months, as have several major banks in the US, despite (or because of) the blatant hostility to the issue shown by the US government.

High profile, often embarrassing campaigns by determined environmental activists do work. This is not a new discovery. The model for these activities is the US campus campaign against South Africa in the mid-1980s. Designed to undermine the apartheid regime economically, it made South Africa a pariah state for US firms for nearly a decade, and triggered several anti-South Africa investment laws in Congress.

The influence of activist groups goes well beyond climate change. That environmental, social and governance (ESG) directed investing has moved from fringe to mainstream is largely down to non-governmental organisations (NGOs), particularly since the 2008 financial crash. After the crash, financial institutions realised they had to show visible change to answer charges that they were out of touch with the needs of society. Engaging with activists allowed banks and investors to show they were listening, and it chimed with the needs of their 'sensitive' clients such as pension funds, which were under pressure from employees and labour unions to consider the social and environmental impact of their investment choices.

But with activists expecting action on concerns as diverse as indigenous rights and sustainability, circular economies, supply chain labour standards and animal rights, how should funds prioritise their policy development? As it happens, the activist groups' own campaigns provide a handy early warning system of which issues will catch fire with the public and stakeholders. 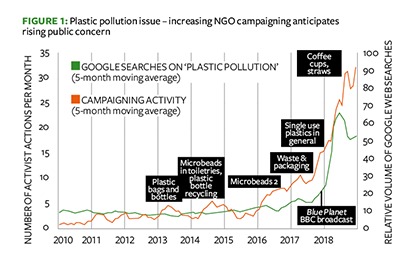 Take plastics. Three years ago, plastic pollution was a rumbling issue. Experts were aware of the problem, but there was little public interest except regarding plastic carrier bag littering. This started to change with NGO pressure over plastic microbeads in toiletries, and exploded in early 2018. David Attenborough's Blue Planet programme for the BBC, which showed turtles swimming in plastic waste, was a factor here - but so was a massive increase in NGO campaigning on single-use plastics in the months before. This had already begun to put major corporations and politicians on the spot.

As Figure 1 shows, this almost-overnight change in public sentiment correlates with the earlier uptick in activist campaigning, which we track through logging their major campaigning actions, tagged to the key issues. With a series of well-focused and increasingly insistent campaigns, NGOs effectively forced the plastics issue into the public consciousness (as measured by the relative volume of Google searches).

We can see a similar correlation with shale gas (fracking) in the US, and currently with green vegetarianism - vegetarianism and veganism inspired by environmental concern (see Figure 2). We are probably only in the early stages of the issue cycle, but the same 12-18 month lead of rising campaigning over public response is already visible. 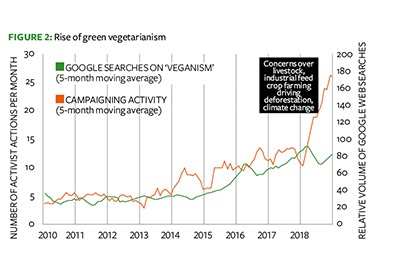 We know NGOs 'make the weather' on ESG. The predictive power of their campaigning reveals that their impact is no accident. Rather, it is a result of creating overwhelming public attention that almost inevitably drives a public response - and through cooperative financial institutions, this influence is being translated into tangible economic choices. Armed with knowledge of where activists are going, investors have the opportunity to ride this wave, rather than be dragged down by the undertow.

This article appeared in our September 2019 issue of The Actuary.
Click here to view this issue
Filed in:
09
Topics:
Topics