Douglas Anderson talks to Stephen Hyams and Henry Mungalsingh about longevity risk management, actuarial careers and what it means to be an entrepreneur 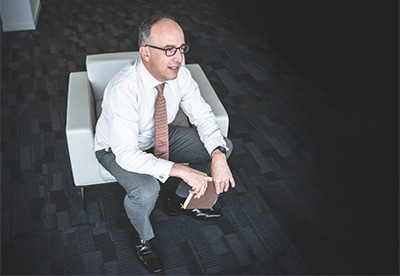 Douglas Anderson is the founder of Club Vita, a company that provides data and analytical tools to help evaluate longevity risk.

Anderson's interest in longevity is influenced by his background; both his father and grandfather were doctors with a strong interest in the life sciences. He went to university to study geography, but ended up with a degree in statistics, followed by a position in the Government Actuary's Department (GAD).

"GAD offered me a scholarship for a year to go back to university, and then provided a huge diversity of challenge," he says. This 'diversity of challenge' included helping a number of Eastern European countries reform their pension systems, and projecting the UK's National Insurance Fund. After 10 years at GAD, Anderson moved to Hymans Robertson, where he spent a further 10 years before founding Club Vita. We meet with him at the IFoA's office in London, and start by asking what led to Club Vita's establishment just over 10 years ago.

"I was leading the practice at Hymans Robertson that advised local government pension schemes," he begins. "There was a dispute about the removal of some early retirement rights on the grounds that people were living longer, but with limited evidence to support that claim. We collected data on 50 such schemes and were able to demonstrate the increase in longevity." Extending the idea to the private sector was the next step, and it quickly expanded beyond Hymans Robertson's advisory clients to reach its present size.

"Club Vita remains owned by Hymans Robertson, but is run as an autonomous, separate business. We are not positioning ourselves as a consulting business; the conflicts of interest are material and it's better for us to separate ourselves from the advisory function." Asked what has changed since Club Vita started, Anderson says: "Actuaries talked mortality rather than longevity and were regarded as being the people who set the assumptions for longevity. It was almost as if the trustees of the pension plan, or the finance director of the insurance company, would outsource that task to their actuary. It has now become more of an enterprise risk management (ERM) application, rather than just setting an assumption.

"A catalyst for change and source of inspiration was Richard Willets' paper on the cohort effect. His identification of the 'golden cohort', and the succession of good things that manifested themselves across their lifetime, such as antibiotics and appreciation of the risks of smoking, was very influential.

"Another development is that postal code information has become the most statistically significant covariate, more so than gender, in explaining the diversity in the model. The core issue that transcends most of the developed world is the substantial difference in life expectancy between different socio-economic groups."

Club Vita has operated in Canada for some years, a market with much similarity to the UK, and further expansion into other countries is anticipated. This includes the US, with Anderson noting: "People have long felt longevity is a less significant issue there because, typically, pension funds don't provide cost of living increases, but many companies have got post-retirement healthcare obligations."

Are we seeing a genuine slowdown in longevity improvements? "Yes, I think so," Anderson responds. "We should recognise that the 1990s and the 2000s were exceptional decades of almost continuous improvement in longevity. The last few years have been more volatile, with more negatives than positives.

"It's dangerous to follow the numbers of deaths because we are an ageing population and we expect about a 2.5% annual increase in deaths in a standstill situation, but there is definitely something going on in terms of a slowdown in improvements. We suspect bias towards the lower socio-economic groups, but we are wary of calling it a trend given the volatile picture - and remember, actuaries have been pretty awful at projecting longevity improvements in the past."

On the role of the CMI: "There's massive interest at present, especially in the US, relating the interpretation of whether the longevity improvement trend has stalled. I spoke recently at an investment conference in the US and was asked a question about the S kappa parameter. This illustrates the influence of the CMI trend model that transcends the globe."

Anderson is keen to see the development of a market price for longevity risk. "If you think of longevity risk as comprising idiosyncratic and trend risk, insurance companies are well set up to deal with idiosyncratic risk, the risk of one person living longer than another. Insurers try to hedge trend risk by offsetting it against mortality risk.

"You can potentially line up the mortality risk on protection-type insurance policies against the longevity risk on annuity-type policies. Now, the fly in the ointment here is the uncertainty associated with whether you've got the same demographic groups in the two different portfolios. To examine this further, you need to collect the data sets in both the UK and US, segment them by socio-economic group and then look at the correlations between the groups."

Anderson explains that this approach, used in conjunction with standardised data format, might enable the creation of synthetic forms of indices that can be traded off into the capital markets. This will enable insurers to recapitalise their balance sheets in order to cope with the anticipated volumes of business from pension plans seeking to de-risk.

"That's a big motivation for the next few years," he says. "I would argue that enabling the trading of longevity risk and mortality risk is a good thing, because at present many pension plans - not just in the UK but all around the world - have got one 'one-way street'-type risk, while we have plenty of insurance companies set up to manage the risk in a better way."

Early in his career, Anderson took pride in being a technical actuary; he calls being referred to as 'chief pointy head' as "a badge of honour".  He has since been developing his wider skills. "I wasn't very good at communication 20 years ago and have been on something of a journey to improve. It's so much harder to write a short pithy piece than a long one." He also highlights the importance of networking.

Reflecting on his studies to obtain the CERA qualification, Anderson comments: "It was a very rewarding experience; the best CPD you could do. It's far broader than being chief risk officer of a financial entity - more a way of thinking about different business models and the relation between risk and reward. I think from a career perspective, it's got to be a good thing, particularly as the band of people who've got the CERA qualification increases; you may well be interviewed by someone who's got it." He has an interesting take on leadership. "You have to have a vision, to think ahead, but you must communicate with your team. It's about persuading people to do things that they don't expect to be doing."

Anderson is optimistic about the prospects for developing actuarial careers. "Being financially numerate is a rarity today, which we probably undervalue. It has some cachet, being an actuary in the market. You might be familiar with thematic investment managers, where you think of a macro theme, such as globalisation or the influence of China, which you want to specialise in. I think actuarial careers are exactly the same as that.

"There's a growing interest in some pretty complicated stuff to do with climate science and how that interacts with the financial world. That is an emerging trend and, if you become a specialist in that field, then more likely than not you'll be in demand. The same applies in certain areas of data science. I think that the mathematics of the genome is particularly interesting. As the price of sequencing the genomes reduces and more people can access it, the insurance industry may need to find a new way to avoid selection against themselves; perhaps the genome will become the preferred pricing mechanism."

For Anderson, what does it mean to be an entrepreneur? "I think I'm at the extreme end of the distribution of actuaries in terms of willingness to take risks and to think in trends. I've always been quite driven. I definitely believe that you can make your own luck; you've just got to be in the right place at the right time." You also need a willingness to accept uncertainty, he says. "Maybe some actuaries like a rule book to organise their world around, whereas the entrepreneurial actuary is the complete opposite. I want everyone to feel empowered to do what they want, within limits. Healthy ambiguity has been really helpful to my career."

This article appeared in our August 2019 issue of The Actuary.
Click here to view this issue
Filed in
08
Also filed in
Interviews