Turning the tables in Ireland

Emmet Thornburgh and Shane Prendergast explore the mortality experience of Irish insured lives, on behalf of the Demography Committee of the Society of Actuaries of Ireland 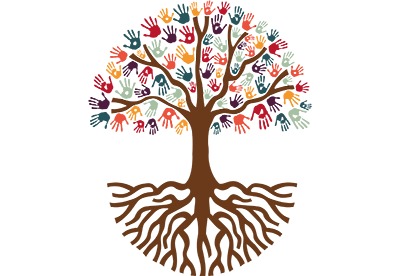 Insurers writing business in Ireland have a range of  UK industry mortality tables and Irish population mortality tables available to them, but which ones best reflect the experience of the Irish insured market?

A recent study by the Society of Actuaries of Ireland's Demography Committee, the Irish Insured Lives Mortality Investigation (IILMI), provides insight into insured life experience in Ireland. The study involved aggregating and analysing experience data over the period 2009-2015 for a range of annuity and assurance products that were sold to lives resident in Ireland. The combined coverage of the contributing insurers represented the majority of the Irish insurance market.

While the data is very representative of the Irish insurance market, there are some limitations to the results, due to the size of the dataset. This is particularly the case when considering results by individual segments, such as by age band or year. Owing to these data limitations, the committee did not try to fit tables to the results.

The data included more than 60,000 lives across all annuity types (compulsory purchase; conventional; enhanced; individual and bulk annuities), with just over 11,000 deaths during the investigation period.

A deeper analysis of the Irish annuitant data reveals some interesting findings when comparisons are made relative to published mortality tables in both Ireland and the UK. Figure 2 shows the actual over expected result against these industry benchmarks.

The Continuous Mortality Investigation (CMI) 2008 Series Pensioner Lives Table is the most representative of the Irish annuitant dataset for males and females. This particular table is the most recent of the insured lives tables considered, and therefore best reflects both the nature of the underlying business and the greatest proportion of the improvements observed to date.

In contrast, the most recent Irish Life Table (ILT16) is the least representative of the underlying data. This is not an unreasonable observation, given that the ILT16 is based on the total Irish population rather than an insured population.

The annualised mortality improvement observed in the annuitant data was 0.5% for males and 1.9% for females. This was calculated using an averaged approach due to the limitations of the size of the dataset and the volatility of the year-on-year experience. 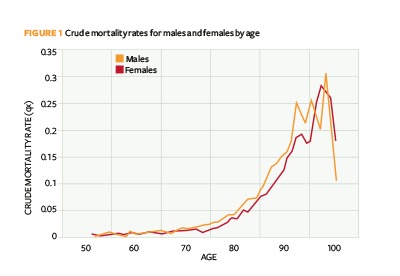 The assurances data included more than a million lives across the main protection types (term assurance, whole-of-life and unit-linked protection), with just over 11,000 deaths observed during the investigation period. The younger age profile of the protection business, relative to annuity business, is such that the lower overall mortality rate was expected.

Figure 3 shows the crude rates observed for males by smoking status and by age. The shape of the observed mortality rates is consistent with industry norms. Heavier mortality rates are observed for males and smokers relative to females and non-smokers respectively. A consistent progression by age is also in line with expected patterns in terms of both gender and smoking status. 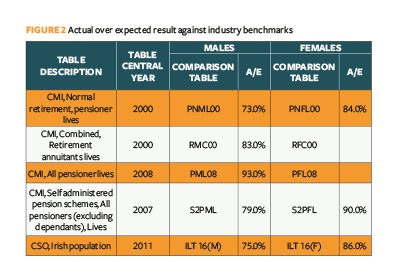 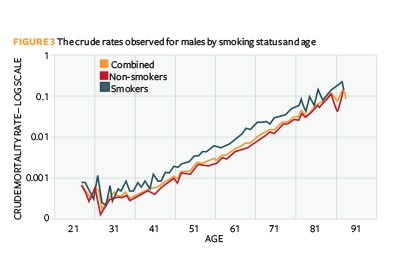 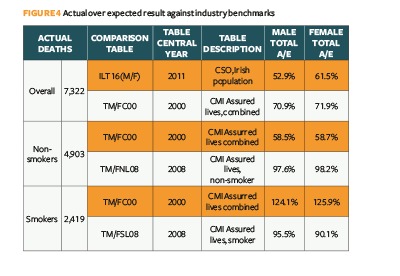 As observed in the annuitant study, the published CMI tables are most representative of the IILMI dataset. The CMI 2008 Series Temporary Assurance Lives Tables are quite reflective of the experience underlying the Irish assured lives. Broadly similar patterns are observed relative to the CMI data for the various categories under consideration - male lives, female lives, smokers and non-smokers. Figure 4 shows the actual over expected result against these industry benchmarks.

The results demonstrate that smoking status is a very significant factor affecting mortality rates for Irish assured lives, as smokers displayed mortality levels approximately double that of non-smokers. The impact of smoking status is most significant between the ages of 40 and 80. The mortality levels for those taking out term assurance policies were lower than for those with whole-of-life or unit-linked protection policies. This difference is likely to be the result of the different underwriting and sales processes that apply to these policy types.

The annualised mortality improvement observed in the assurance data was 2.1% for males and 1.7% for females. This is broadly in line with observed Irish population trends during the same time period.

Individual companies will continue to look at their own experiences when setting assumptions. Nonetheless, this study will support actuaries working with Irish lives and provide them with an additional source of reference for consideration.

The Irish Insured Lives Mortality Investigation (IILMI) is the third such study completed by the Society of Actuaries in Ireland over the past decade. Similar analyses were performed on annuitant and assured lives in both 2009 and 2014. The 2019 IILMI study is available from the Society's website at bit.ly/2G760mD

Emmet Thornburgh is head of Capital Risk Management at AXA Life Europe. He is a Fellow of the Society of Actuaries in Ireland and is also a member of the Society's Demography Committee

This article appeared in our August 2019 issue of The Actuary.
Click here to view this issue
Filed in
08
Topics
Life insurance