A mixed picture for global insolvencies 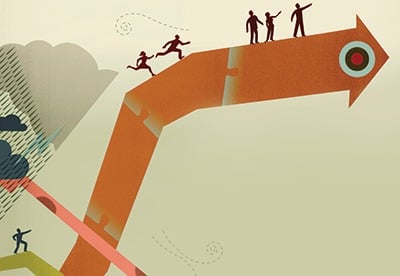 
We stand more than a decade on from the financial crisis. Since then, the macroeconomy has experienced sizeable annual improvements, with global insolvency levels having fallen consistently since 2009. However, looking forward, the outlook offers a mixed picture across the global markets, and new economic research from Atradius forecasts the first rise in global insolvencies in a decade.

Globally, Atradius forecasts an insolvency increase of 1% within advanced markets. While this figure may not seem sizeable at first glance, it becomes more significant when you consider that this is the first rise in a decade, and marks the end of the insolvency recovery cycle. This roughly follows the global economic cycle, which appears to have peaked at 3% in 2018. As the world economy reached its fastest expansion since 2011, the business environment began to weaken. Momentum in the decline of insolvencies slowed, with advanced market insolvencies falling only 2% last year. Rising uncertainty surrounding trade and monetary policy in particular caused a worse-than-expected performance for insolvencies in the last months of 2018. This trend is set to persist in 2019, and we must make preparations in order to adapt to this environment. With the world economy forecasted to grow by only 2.7% in 2019, insolvency recovery is now predicted to be at an end, leading to a projected 1% rise in insolvencies for advanced markets this year.

Western Europe as a whole is expected to be the worst-performing region, with an average increase in insolvencies of 2%. In the UK, insolvencies are forecasted to rise as much as 7% in 2019 - up from the previously expected 4% rise - following a sharp loss of economic momentum from late 2018 onwards. This follows a 10% rise in insolvencies last year. The deterioration in the insolvency climate is driven in no small part by Brexit-fuelled uncertainty, which has been a constant factor during the last three years and impacts not only the UK but also the other 27 EU member states - particularly those with the closest trading links to UK.

The downturn is reflected in the four consecutive quarters of contractions in business investment, with postponement of investment decisions having ramifications for smaller firms further down the supply chain. This has been most severe in the retail and construction sectors, and is likely to continue in the coming months due to relatively low business and consumer confidence. While this is a rather gloomy picture, it is also relevant to note that, as of mid-May 2019, the Bank of England has held interest rates at 0.75% and indicated that economic growth in the UK has been stronger than expected.

In the background, Brexit discussions continue. Should an orderly withdrawal and smooth transition period fail to be achieved, we could be looking at a more telling impact on the economic environment - and on insolvency levels.

This negative outlook is not limited to the UK. Italy is projected to experience a 6% rise in insolvencies, driven by the onset of recession in the second half of 2018. Domestic demand is negative, and the country's fragile economic outlook is clouded by political volatility. Switzerland and Sweden are expected to see a 3% growth in insolvencies, while the Netherlands, Germany, Austria and Norway expect a 2% increase. In France, a 1% decrease in corporate failures last year is predicted to become a 1% increase in 2019, due to stagnating GDP growth and constraints on labour supply and production capacity. 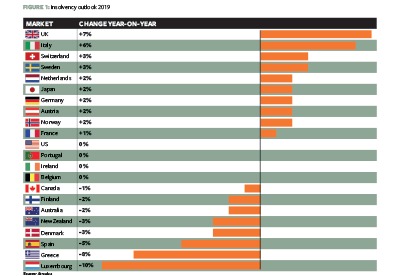 
More positively, Luxembourg is expected to see an improvement, with a 10% decline in insolvencies - although this follows a 28% increase last year. Insolvencies are forecasted to drop by 8% in Greece, thanks to its strongest economic performance in a decade, and by 5% in Spain, driven by employment growth and stronger consumption. Denmark is expected to see the largest decrease in insolvencies in non-Eurozone Europe, with a 3% drop projected as the domestic economy strengthens.

Across the Atlantic, the economic outlooks for the United States and Canada are diverging - but both are expected to see relatively stable insolvency levels in 2019. Corporate bankruptcies in Canada are forecasted to decline 1% this year as economic growth slows to 1.4% from 2.1% in 2018. The slowdown is relatively broad-based, with contributions including weak business investment, high interest rates, slowing oil output and the implementation of a carbon tax, among other factors. More positively, new federal tax measures have been taken in order to spur investment and the expected implementation of the United States-Mexico-Canada Agreement, which should support exports.

In the US, bankruptcies are forecasted to remain static at current levels, just below 80% of pre-crisis levels, supported by 'solid' economic growth. After a rocky start to the year, the Federal Reserve's announcement that it would pause monetary policy normalisation and advance trade talks with China, in line with the end of the government shutdown, helped to calm markets. Business confidence remains reasonably positive and the labour market is very tight, offering a stable outlook. Nevertheless, some challenges remain for the second half of 2019 due to tightening Federal Reserve policy rates, high levels of corporate debt and the fading out of fiscal stimulus.

In the Asia-Pacific region, Atradius forecasts an increase of 1% in insolvencies, with small improvements in some markets offset by decline in others. In Japan, insolvencies are expected to increase 2%, remaining at historically low levels.

While business sentiment is improving, the outlook is challenged by lower exports related to China's economic slowdown, as well as trade uncertainty. In Australia, insolvencies are forecasted to decline by 2%, almost in line with 2007 levels. While the Australian economy is losing steam, the weak Australian dollar, mining sector growth and increasing liquified natural gas capacity are contributing to stronger business sentiment. This has led to a more positive outlook, with the potential impact of the risks associated with China yet to be seen. Meanwhile, corporate bankruptcies in New Zealand are expected to decrease 3% in 2019, supported by high business and consumer confidence, and a weaker New Zealand dollar that is boosting exports and tourism. This positive outlook is vulnerable to Chinese growth, slower global trade and the impact of changes in dairy prices.

With global insolvencies rising, it seems that uncertainty has become the only certainty in today's market. While this is far from optimal for trade, no business can afford to stand still - they must face up to challenges in order to survive and thrive. Adaptability, stringent planning and risk management are the cornerstones of success, keeping one eye firmly fixed on a customer's ability to pay. The good news is that support is on hand to identify risk and prepare robust mitigation strategies.

Trade credit insurance marks its centenary in the UK this year, having first been introduced in order to facilitate trade following the First World War. A century on, it still performs this role and has evolved to provide support right from the beginning of a trade journey - often earlier, helping to spot opportunities and manage risk from the outset. Risk is an inherent part of international trade and, with this in mind, today's climate of rising insolvencies and an uncertain economic landscape simply becomes another risk to manage; in fact, it's very much business as usual.

This article appeared in our July 2019 issue of The Actuary.
Click here to view this issue
Filed in
07
Topics
Risk & ERM