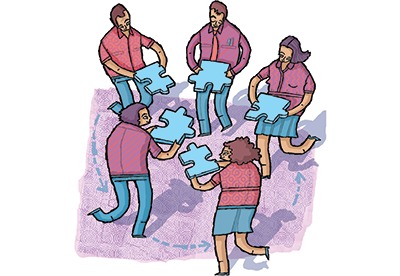 
The value of deals in the insurance mergers and acquisitions (M&A) market rebounded during the first half of 2018, encouraged by a slew of megadeals and a wide variety of drivers. We take a look at some of the underlying market trends revealed by the latest Willis Towers Watson/Mergermarket study of insurance M&A.

Private equity (PE) investors were fringe players in the market when we started the Willis Towers Watson/Mergermarket report in 2013. Since then, PE funds have seen record levels of flow, with available cash reserves estimated to have reached a record $1trn in 2017. They have become increasingly prominent in a large number of transactions, partly because of the current chase for yield, making insurance stocks relatively more attractive. In Europe, the principal motivating factors for transacting deals are typically capital management and scale.

PE participants are generally quite opportunistic investors. The focus of many insurers on capital actions and consolidation, or the need for distress sales - sometimes linked to the increasing number of natural catastrophes - have created those kinds of buying opportunities. Moreover, PE investors are now less focused solely on distribution.

A number of companies have also become more active in the market and are labelled as PE, though they see themselves differently. Regardless of labels, what you're seeing is a broad array of investors with the ability and willingness to take on the complexity that a traditional insurance company or bank might deem unappealing. They're backed by a plentiful supply of capital. This has manifested itself in more deals involving consortia of financial investors - deals that would have been difficult to complete in the past.

In the Asia Pacific region, attention is still mostly on growth opportunities - particularly around new distribution in developing markets. The latest developments, though, suggest a reduction in the upfront consideration paid for access fees, and more emphasis on deferred contingent performance payments. 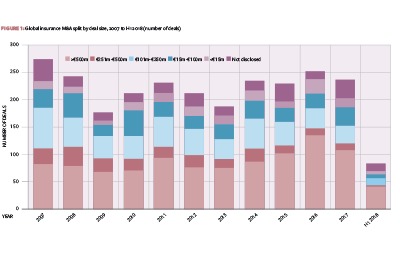 How much steam is left in the megadeal train?

Scale is important in a lot of sectors experiencing megadeals, so where there are suitable targets, there will almost always be megadeals. In Asia they are, and will remain, rare.

For megadeals to happen, a number of factors need to align. Macroeconomic indicators that have influenced market consolidation are still largely dominant. There are companies that have focused internally on getting the balance sheet right and, having achieved that, will be willing to look outside for the right opportunities. We would expect some larger deals to involve Japanese investment in North America. A relatively flat domestic economy is one incentive, and Japanese companies have also shown a willingness to pay full price for a quality asset, owing to a relatively lower cost of capital.

Although our report noted that Solvency II-driven activity has subsided somewhat, it's certainly not finished, thanks to the continuing attention European insurers' are paying to capital management. Outside the US, companies are still working through how IFRS17 impacts dividend capacity, so that could also be a factor.

Risk-based regulatory regimes along the lines of Solvency II are becoming more common. Most life insurers in Asia are headquartered in Hong Kong, which is introducing risk-based rules to replace a fairly simple regime based on the old Solvency I. These kinds of changes will almost definitely impact risk-adjusted returns.

Tougher regulation means more expense. In a world where insurance regulation is constantly evolving, you can't rule out subsequent greater M&A activity - and this is an interesting point when you look at Asia. Unlike other regions, only a handful of insurers in Asia are publicly traded; most are private companies, including some that are owned by family businesses. Transactions involving privately-held groups take longer to negotiate and complete, reflecting the stronger emotional ties the owners have to the business. As a result, these companies and the opportunities they offer haven't typically been available in the market. However, the expense and complexity of more stringent regulations will almost certainly force some of these companies to contemplate sales.

The impact of the Belt and Road initiative

The Chinese Belt and Road (B&R) initiative is about creating new land and maritime trade routes for Chinese goods - both of which will have consequences for the insurance industry as these routes and trade flows become more established. The intention is for the land route to stretch into Central Europe. The Chinese government has already made investments in marine facilities in Sri Lanka and Croatia, and there are other investments waiting in the pipeline. The expectation is that state-owned insurance enterprises will take the initial risk management lead, but other insurers will seek to gain more of a presence in south-east Asian countries, such as Indonesia and Malaysia, in order to benefit from the second wave of B&R.

Insurtech: from tactical to strategic investment

Insurtech is a hot topic in the property and casualty (P&C) realm, but so far has not been a major driver of insurance M&A activity. Willis Towers Watson's quarterly insurtech updates reveal that a lot of the investment activity is coming from PE and private (or angel) investors. That's not to downplay the several incumbent insurers that have, in effect, set up their own venture capital operations to exploit insurtech. or bought up early stage businesses. For the most part, though, the industry has pursued a little bit of everything, assuming that the consistent churn of activity will keep companies at the forefront of the most promising aspects of insurtech, get them on board with those technologies and create value for shareholders.

P&C companies are undoubtedly more advanced in this area than life companies. However, we're starting to see the potential for technology such as wearables to impact health by promoting greater wellbeing, and also to support related insurance propositions. Right now, the vast majority of life companies are thinking about insurtech opportunities incrementally, rather than with business transformation in mind. While there is a case for companies to start thinking about insurtech in a more transformational way, a start-up mentality may be needed.

One thing that could change conditions for P&C insurers is the reserving cycle. The current cycle of companies making large releases of annual reserves has already lasted longer than expected, and there are signs that these are starting to tail off or reverse, possibly impacted by the recent spike in natural catastrophe claims. Previously, when the reserving cycle has strengthened, M&A activity has been dampened - no company wants to be perceived as selling at 'fire sale' prices. If pressures on some companies' balance sheets do build, we anticipate that M&A activity could slow.

Tax reform in the US has provided something of a steroid kick for insurers' earnings, which could be a lure to overseas acquirers. This hasn't led to a significant volume of activity so far, but it could well change the attractiveness of some US targets. Meanwhile, interest rates and monetary easing policies remain wildcards. Money is cheap, and any change in that regard could obviously have an impact, although not an immediate one.


There has always been a supply of deals from multinationals that have pulled out of Asian markets because of the inherent difficulties and started looking elsewhere, but these forces are perhaps stronger now. One area garnering attention is the large in-force books of some Australian life insurers, and whether these may generate deal activity.


It will be interesting to see how future deals could potentially impact the disintermediation of the insurance value chain. While we have yet to see any signs of a transformative change in strategy across the industry, it is something watch out for.

The Willis Towers Watson/Mergermarket study of insurance M&A can be viewed at: bit.ly/MnAWTW

This article appeared in our July 2019 issue of The Actuary.
Click here to view this issue
Filed in
07
Topics
Regulation Standards