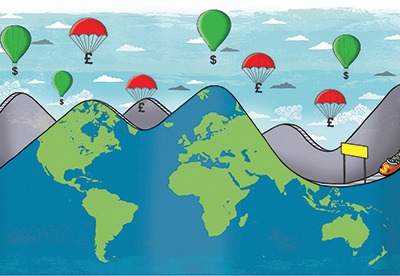 A different landscape for insurance is closer than most people realise. Swiss Re Institute (SRI) forecasts that the long-term growth rate for insurance premiums in emerging markets will be 5% higher than in advanced economies. In emerging Asia, premiums are expected to grow three times faster than the global average of the next decade, and China is set to become the world's largest insurance market by the mid-2030s.

Emerging Asia is seeing increasing demand for health insurance, mortality protection and savings products, and demand for property and casualty insurance (P&C) will be boosted by continued urbanisation and increasing numbers of individuals with assets to protect. Insurtech innovations will be a key driver of growth and will encourage transformation of the insurance value chain, with Chinese insurers arguably at the forefront of technological innovation in Asian insurance.

As the shift in economic power from west to east continues, SRI expects Asia to contribute more than two-fifths of global economic growth over the next decade, with China alone accounting for more than 25%. The relative outperformance of Asian emerging markets compared to peers in Latin America (Brazil or Mexico) and Europe (Russia and Turkey) comes from the region's greater competitiveness when it comes to innovation capacity and business dynamics, as well as from economies of scale (88% of the world's next billion middle-class population in the next five years will live in Asia).

Emerging markets are expected to experience strong growth, but they do face headwinds (see Table 1). Cyclical developments of the past decade include contagion from crises in advanced markets, steep downturn in commodity prices and, more recently, rising trade protectionism. The focus on these cyclical challenges has partially masked underlying structural weaknesses, such as deterioration of demographic gains and stagnation of productivity growth. These macroeconomic risks will slow economic growth, which has direct implications for insurance. Nevertheless, our analysis suggests that in aggregate, as living standards rise and people become wealthier in these emerging markets, insurance purchasing will increase faster than income growth. 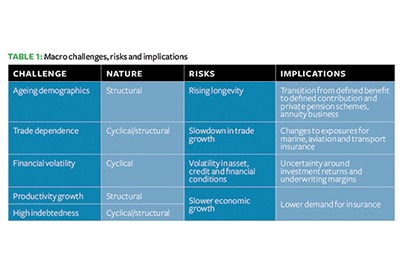 The S-curve analysis also suggests that per capita income levels in China support a steep increase in insurance penetration. Per capita GDP in China increased at a five-year compound average growth rate (CAGR) of 8.2% to reach $9,794 in 2018. Life and non-life insurance penetration, meanwhile, increased to 3.6% (up 1.7%) and 1.3% (up 0.2%) respectively between 2012 and 2017.

SRI forecasts that life and health (L&H) premiums in China will grow by 10% each year during the next few years (see Table 2). China will experience rapid ageing in the coming decades, four times the pace of ageing in Europe during the past century. China's state social safety net, however, is less generous than the social safety net found in other parts of the world, and state-owned enterprises (SOE) play an important role in providing coverage for employees. The path of both public and SOE schemes, however, is slowly becoming unsustainable - as is the case in most Western economies. Consequently, the population is increasingly concerned about the risks that high medical costs could pose to future wellbeing. This will likely drive strong demand for L&H cover in health, annuities and long-term care solutions.

From the P&C side, the primary opportunities in China are found in engineering, trade credit and property insurance, given infrastructure spending of $6.4trn until 2030 as part of the country's Belt and Road (B&R) initiative. SRI expects B&R infrastructure spending to generate an additional $34bn in additional premiums. The Chinese government has also launched initiatives to support rural areas with subsidised agriculture insurance. P&C personal lines will also experience rapid growth facilitated by technology and ecosystem solutions.

SRI expects strong insurance market growth in India, Indonesia and Vietnam. In some markets, growth is expected to be even faster than in China, although it is starting from a lower base. Growth in India's P&C sector is expected to average 12% in real terms annually during the next decade (Table 2). In Indonesia, Vietnam and the Philippines, P&C growth will exceed 7% CAGR, which will see the size of these insurance markets double over the next decade (subsumed in 'Emerging Asia (Not China)' in Table 2). Demand will be driven by motor and property lines, as an emerging affluent middle class looks to protect its assets. As in China, agricultural insurance growth in India is expected to remain strong, supported by the revised crop insurance scheme launched by the government in 2016; to date, less than 50% of farmers are covered by existing insurance schemes.

L&H premium growth in emerging Asia will likely be slower than P&C growth. This is partly due to regulators encouraging insurers to focus on protection products, in a bid to reduce more risky investment-type and unit-linked investment products. Governments have also increasingly devolved responsibility and risks for health and old-age protection to individuals. Demand for health insurance will be particularly strong, supported by rising medical costs and increased risk awareness. SRI expects the broader population to increase spending on health insurance in order to avoid crippling out-of-pocket expenses (which, in India, can go up to 70%). This will close some of the $1.4trn health protection gap in the region. Government efforts to spread financial inclusion, and insurers' use of bancassurance, product innovation and digital platforms (especially for term products) will further support insurance sector growth in emerging Asia.

Insurtech is the key facilitator of insurance growth across emerging Asia. Use of mobile devices is growing and customers are increasingly interacting with insurers through digital platforms - especially in China, Indonesia and Malaysia. Changing consumer behaviour is facilitating the gathering of tremendous amounts of digital data, which enables insurers to provide tech-based solutions and distribute them cheaply and efficiently. Insurers are thus able to deliver better services along the insurance value chain. Chinese insurers are leapfrogging their advanced market peers, using ecosystem platforms to change the business design and processes of re/insurers.

Although technology can give rise to new risks that need to be carefully considered, such as those from outsourcing and cybersecurity, it can also provide opportunities to improve value proposition. Ultimately, insurtech developments will boost transformation of global insurance markets, which itself reinforces the insurance growth SRI forecasts in emerging markets led by China and other countries in Asia. 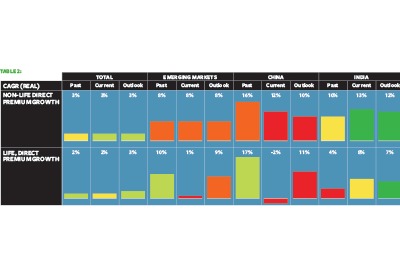 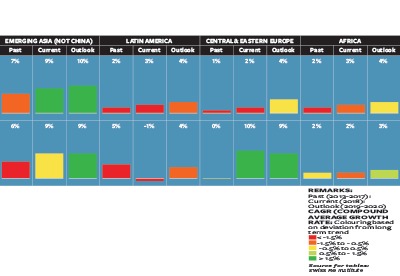 This article appeared in our July 2019 issue of The Actuary.
Click here to view this issue
Filed in
07
Topics
Technology