Hetan Shah is a man who wears a lot of hats: 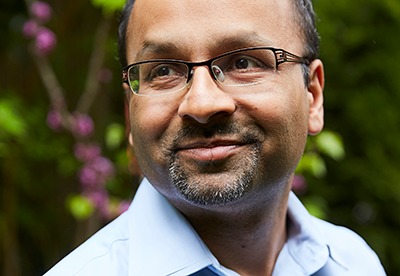 Chair of the Friends Provident foundation, deputy chair of the Ada Lovelace Institute, visiting professor at King's College London, and member of the advisory board of the Science Media Centre - among other non-executive commitments. Most days, however, he can be found at the Royal Statistical Society, where he is executive director. It's at the Society's offices, near Old Street in London, that I sit down with Shah to discuss his work and the work of the society.

Although Shah has headed up the society's executive since 2011, statistics isn't his background. "I'm not a statistician," he says. "I have got two skillsets. One is around policy and communications - I worked in the think tank world many years ago. The other is around running organisations. I've been a professional charity chief executive for seven-and-a-half years here and for five years in my previous role, which was a small charitable organisation. The RSS has got 30 staff and is a £2.5m-turnover organisation with about 10,000 members around the world." Combining these two skillsets is highly important for such a technical membership organisation, he explains: "My job is to try to understand the issues, then 'translate' them and take that out to policymakers and other stakeholders."

We discuss the news that the government has failed to recruit a new chief statistician for the Office for National Statistics (ONS), a crucial role in the run-up to the 2021 UK census. Shah is  confident the situation will  be resolved relatively quickly. "What it really highlights is that there is a shortage of statisticians who have got that kind of big management experience and the  political nous for the permanent secretary job."

A manifesto for the future

One of the public policy projects that Shah  has implemented is the RSS's 10-point data manifesto, which starts by stating: "What steam was to the 19th century, and oil has been to the 20th, data is to the 21st. It's the driver of prosperity, the revolutionary resource that is transforming the nature of economic activity, the capability that differentiates successful from unsuccessful societies."

Originally published ahead of the 2015 general election, the manifesto was an attempt to proactively communicate with parliamentarians and the public. "The RSS had been good at responding to government consultations, but hadn't necessarily been very good at setting out its positive vision," says Shah, discussing his role in the manifesto's production. "I, having come in with more of a policy and communications head, looked across the piece and tried to develop it as a manifesto, which was more positive."

The manifesto has 10 detailed and specific deliverables, developed over a long period and covering a lot of ground. "One of the big focuses was around the investment in science and research," says Shah. "The government and the opposition are all signed up to increasing the science and research budgets. I think that is very positive and, more widely, there is recognition in the government of the importance of data."

One of the manifesto's points is that the use and reliability of evidence in public debate must be improved. This is a topic that Shah is obviously passionate about. "You've got to work all the way through the pipeline," he says. "There's got to be an investment in good quality evidence. We must improve statistical literacy and demand for evidence, both among policymakers and among younger people. We need a citizenry that demands good quality evidence on pending policy, and civil servants who understand what good evidence looks like."

One high profile set of statistics that has generated a lot of debate recently is the gender pay gap. Shah and the RSS have been involved in this particular debate; does he think the statistics have been a success so far?

"I think it's been a success at drawing attention to the issue and enforcing greater levels of transparency. There's been a lot of misunderstanding about what the gender pay gap constitutes. Most people who only have glancing familiarity with it probably assume it's a like-for-like comparison. I think the media hasn't done enough to really clarify that that's not what it's about."

Shah mentions the RSS's recent recommendations that aim to improve the publication of gender pay statistics, including improved guidance for employers around reporting and automatic sense-checking of results. In the first year, 4% of companies reported a statistically unlikely 0% gender pay gap across both mean and median measures, and some companies had exactly equal proportions of men and women in each pay band. "These are quite practical recommendations in terms of improving government guidance and how it should be expressed, whether it's in percentages or pounds and pence - that sort of thing. We are worried that some companies are 'gaming the system', as it were. I think, over time, those things will be ironed out."

Gender equality is not just a statistical exercise for Shah, either: in March, Parliament's Public Administration and Constitutional Affairs Select Committee was forced to apologise after Shah publicly pointed out and criticised its all-male line-up in recent evidence sessions.

The Ada Lovelace Institute is a think tank that was launched last year to ensure data and AI work for people and society; Shah has been involved from the start. "This is something I'm very proud of," he says. "It emerged from the RSS's work. We convened a workshop, I think it was in November 2015 about 30 people thinking about forms of data, big data and so on. What governance and ethics should organisations use? What could we be doing about it? The bigger recommendation that came from this was that we needed a new council for data ethics to support the deep thinking in this area.

"We approached the Nuffield Foundation, which hosted the Nuffield Council For Bioethics; 20 years ago, this had done the same thing around medical ethics and bioethics. We're just in the process of building this organisation. We've got the first board members and I'm deputy chair, and we are appointing a chief executive, which we have interviews for next week.

"The sort of work we do will be longer-term thinking on deep ethics issues around data science, AI and machine learning. How can society benefit from this, and how should it be governed?"

Given the recent news regarding the collapse of Google's 'ethics committee', there's clearly a need for more thinking in this area, both privately and publicly. "I think this is one of the real strengths of the Ada Lovelace Institute - we are independent both from government and from the private sector. Our job is to work with government and private sector bodies to try to understand some of the ethical dilemmas that companies feel they're facing and might want guidance on.

"To take biometrics as an example, quite a few companies are pushing facial recognition hard as a solution, but a body like the Ada Lovelace Institute could look and say: is this solving a real problem? If so, is it worth the potential risks that we face in terms of our privacy rights? And so on."

Bringing statisticians and actuaries together

Ethics is an area that the RSS and the IFoA are working on together; in 2018, the two organisations launched a collaboration exploring practical and ethical implications in the rapidly developing field of data science.

"Our licence to operate when using these new forms of data will rest upon understanding the ethical implications," says Shah. "If the public comes to mistrust the use of data, if they feel that it's essentially being used against their interests, we might end up in a situation similar to that of genetically modified food - where, although the science could have been quite positive, the public turned against it and then set back the use of that science for many, many years.

"This is where advisory boards can be helpful because, if you can bring in members of the public, they will give you a different viewpoint and ask questions of you. I was on the National Statistician's Data Ethics Committee, and when the ONS was thinking about using, for example, Twitter data, it would come to us and ask, 'Do you feel that this is okay or not?'"

This leads Shah to suggest  that you have  to focus on the outcomes. "If, over time, regulators can see that particular bits of business are biased against people of certain races, for example,  it might be that this forces you back to the table to say 'this is unfair'. The final thing I'd say is you can twist it around; if we start with a fairness mentality, then it's something we prioritise. We can use these powerful techniques to build tools for greater levels of fairness."

The Royal Statistical Society is open to anyone with an interest in statistics, data and evidence for the public good, including members of the IFoA.

This article appeared in our June 2019 issue of The Actuary.
Click here to view this issue
Filed in:
06
Also filed in:
Interviews
Topics:
Technology