The actuarial profession is too focused on specialisation, argues Waqas Ahmed  the secret to success lies in polymathy 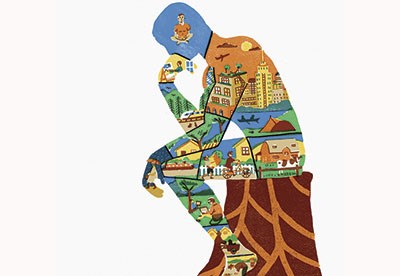 It is too often assumed that when geniuses get into the 'zone', they become tunnel-visioned, blocking out all peripheral distraction to focus on a specific task. The truth is that this 'zone' is actually a 'flow state', the point at which the genius finds absolute unity and harmony in every aspect - central or peripheral - even remotely connected to the task at hand, whether it be a pitcher in a baseball game, a musician on their violin or an actuary in the midst of an evaluation.

March's feature article in The Actuary by Nico Aspinall outlined the importance of environmental, social and governance, which essentially refers to taking a holistic approach to actuarial science - 'seeing the big picture'.

Indeed, actuarial science - like most 21st century fields or professions - is inherently interdisciplinary. A successful actuary will not only understand mathematics, business, behavioural science, politics, monetary economics, demography and much more, but will also know how to synthesise this seemingly disparate knowledge to construct accurate and insightful evaluations. The actuary ultimately finds unity in the complex diversity they are confronted with. At least, that's how it's supposed to be.

Unfortunately, we are generally not encouraged to approach life, learning and work in this way. We treat anything seemingly unrelated to the task at hand as a kind of 'otherness' - a distraction to be avoided rather than assimilated. This is because by the turn of the 20th century, academia, government and business had each adopted a stringent 'division of labour' structure, establishing a culture of segregated hyper-specialisation in every sphere of life. This trend has become the norm.

The myth of the 'specialist'

Such division of labour had profound sociopsychological implications. We automatically assume that the great achievers in the world are lifelong specialists in their field. We presume that they've been completely immersed in their work, not allowing anything to distract them from their primary subject or activity. We pre-suppose that the great Nobel laureates, scientists, writers and artists, athletes, businessmen and statesmen are great because of their exclusive commitment to their work; that this complete, long-term immersion allows for their creative breakthroughs. This is a flawed assumption.

Edwin Hubble excelled in athletics, was an amateur boxer and angler, served as a soldier during the First World War, qualified as a lawyer, coached basketball and taught Spanish before becoming the Nobel Prize-winning astronomer whose name was given to the Hubble Telescope. Nicolaus Copernicus was a clergyman, economist, painter, polyglot, diplomat, physician and lawyer in addition to becoming the father of modern astronomy, whose heliocentric theory revolutionised the way astronomers viewed the universe.

According to the Sigma Xi Survey, a study by American psychologist Bernice Eiduson based on testimonials by numerous Nobel laureates, great scientists often have multiple avocational interests (prior careers or hobbies). In-depth analysis of Nobel laureates in Literature between 1901-2002 found that great artists and writers often have multiple avocational interests. Eiduson found that laureates were highly accomplished outside their work: more than half had at least one artistic avocation, and almost all had an enduring hobby, from chess to insect collecting. One-quarter were musicians, and 18% practised visual arts such as drawing or painting. They are 25 times as likely as the average scientist to sing, dance, or act; 17 times as likely to be a visual artist; 12 times more likely to write poetry and literature; eight times more likely to do woodworking or some other craft; four times as likely to be a musician; and twice as likely to be a photographer.

As one studies the lives of renowned 'specialists', it appears that they often have a number of avocational pursuits that in some way influenced - or facilitated - their main endeavour. In many cases, they themselves admit to this. It is worth questioning whether those we consider 'specialists' are actually specialists at all.

Those of exceptional cross-domain versatility who think holistically in this way are called polymaths. Polymaths are usually understood as people of 'great and varied learning', but going deeper, they are essentially people with multidimensional minds, who pursue optimal performance and self-actualisation in its most complete, rounded sense. Having such a mindset, they reject lifelong micro-specialisation and instead see things more broadly, often excelling in multiple, seemingly unrelated fields - simultaneously or in succession. The inimitable complexity of their minds and lives are what makes them uniquely human. Sometimes, they use their knowledge of multiple fields to enhance their knowledge of and performance in their 'core field'. How many such polymaths do we have currently in the actuarial profession?

It has long been accepted that actuarial science is interdisciplinary by nature, and so it is not difficult to imagine how it could serve as a platform for a polymath. Javed Khattak, who has worked as an actuary for more than eight years, certainly thinks so. He started out in the profession in 2007, getting his Associateship in 2012 and Fellowship in 2016. From his experience, the actuary does initially receive a multifaceted training, but this ethos is not encouraged later on in the career. "The actuarial exams appear to train young actuaries in multiple disciplines so, in theory, actuaries should be well-placed to use wider knowledge," he says. "But this tends not to happen."

It doesn't help that actuarial departments often have little interaction with other departments.

"In most large companies, actuarial departments tend to be segregated significantly from other departments," he says. Indeed, the cult of specialisation seems to have infected the profession. "The prevailing mentality of actuaries, within the profession and externally, is that of a 'specialist', which focuses almost exclusively on the mathematical and statistical aspects of the job."

An actuary's role, he insists, is much more than that. He gives the example of an actuary evaluating and being part of the negotiations to agree a company's cash contributions to a pension fund (as a sponsoring employer). According to Khattak, there's a difference between the 'ideal number' and the 'ideal solution', irrespective of whether advising the company side or the trustee side. The former can be arrived at through conventional actuarial calculations. The latter requires a consideration of all stakeholders, including the pension fund, the sponsoring employer and their specific business position, the members of the fund, the government and the regulatory body.

"In order to truly understand the client's situation (which is by nature multifaceted) and to excel in management and leadership positions, a less narrow approach is needed," he says. "This is why the best actuaries are actually those who do not confine themselves to technical or mathematical knowledge alone."

Khattak has since moved on, as he felt that there were other ways to satisfy his zest to explore other domains. He is currently co-founder and CEO of Zisk Properties and is involved in a variety of initiatives and businesses relating to blockchain, finance, technology and real estate.

He admits that there is potential for the actuarial profession to reform. "Actuaries need to start capitalising on their wide-ranging training to become better actuaries, as actuarial work is not only reliant on technical knowledge." His suggestion is simple: "Perhaps rotation programmes into other departments, together with wide-ranging training throughout their careers, can enhance success for the actuary." He also believes that actuaries' eclectic training makes them well-placed to try new things, even outside of the profession.

Abraham Maslow said that 'what a man can be, he must be' and that one only attains a state of self-actualisation when 'one becomes everything that one is capable of becoming.' Knowing that the most effective, creative, highest performing individuals are polymathic in their approach to 'specialism', perhaps employers and employees in the actuarial profession ought to re-evaluate the best route to 'self-actuarisation'. 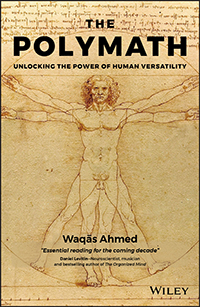 Waqas Ahmed is author of The Polymath: Unlocking the Power of Human Versatility. He is artistic director at The Khalili Collections and is completing his postgraduate studies in neuroscience at Kings College, London.

This article appeared in our May 2019 issue of The Actuary.
Click here to view this issue
Filed in
05
Topics
Careers
Professional
Soft skills