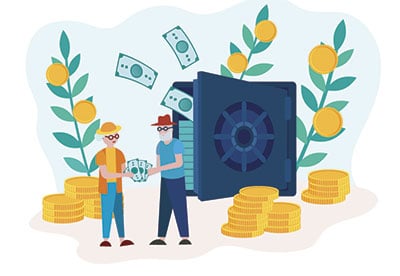 In 2012, the UK embarked on one of the greatest pension experiments - automatic-enrolment (AE). Seven years on and it is making a difference, with 10 million people now saving into their workplace pension plan and benefiting from their employer's pension contributions. Equally positive,  the Department for Work and Pensions (DWP) highlights that only 1% of employers have reduced their total pension contributions across the whole workforce as a strategy to absorb the cost of meeting AE requirements - a far lower percentage than expected.

There is strong evidence that employees are getting used to the idea that each job comes with a pension, and this means paying pension contributions. This is demonstrated by lower opt-out rates for new recruits compared to when AE commenced. Overall, businesses have responded well. In 2018, the DWP reported that around two-thirds of employers found their ongoing AE duties less onerous than expected, while in February 2019, the Pensions Regulator revealed that over 1.4m employers confirmed they have met their AE duties.

Impact on behaviours and attitudes

The success of AE is down to eligible employees not having to take any action. As soon as they fulfil the eligibility criteria (age 22 or above, earn over £10,000 a year and work in the UK), their employer auto-enrols them into a workplace pension scheme. They can opt out, but fewer than 10% have chosen to do this.

Rather than a big bang approach, employers were staged into their AE duties between October 2012 and April 2017. Each employer was given a staging date, determined by the size of their largest pay-as-you-earn scheme in April 2012. New employers began to stage from May 2017. The Pension Regulator worked closely with employers to ensure they were aware of their responsibilities, and made it clear that if employers didn't comply they faced heavy penalties.

The minimum total contribution under AE is 8% of a band of earnings, but a phased approach was adopted, as shown in Figure 1, to allow employers and employees to become familiar with AE. The first increase in April 2018 was from 2% to 5%, and then to 8% in April 2019. 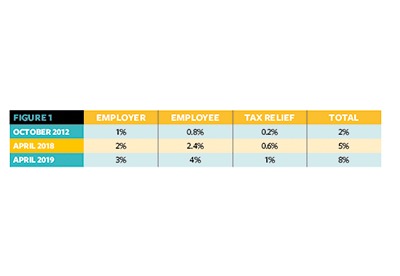 There has been some debate about whether we are approaching 'saturation point' in pension contribution levels, which could result in mass opt-outs following the most recent increase. However, recent research by NEST, the AE pension provider set up by the government, indicates the April 2019 contribution increase isn't expected to lead to people ceasing contributions or cause a higher rate of opt-out among new joiners. The positive impact of inertia on pension saving cannot be underestimated, and it is expected many people won't notice the extra contributions or the fall in their take-home pay. In fact, 28% of employees have considered increasing contributions further.

Moving from inertia to engagement

The reality is many people are still not engaged with saving for their retirement. Even with minimum contribution levels rising, an 8% contribution isn't going to be enough to provide an adequate income in retirement for most, even combined with the state pension. The focus needs to move from inertia to engagement, to help people understand how much they need to save, and help them to make this happen.

There are certain demographics who are less engaged and we're beginning to see trends emerging. Women tend to have higher participation rates than men and, while pension participation remains highest for older employees, it's good to see the largest increase has been among the youngest, those aged 22-29. More people are saving for retirement, but AE doesn't cover all workers and so many people are still losing out. Paying into a pension should be the social norm for every UK employee, and the DWP is seeking to change AE policy to allow more people to benefit.

A reduction in minimum age for AE from 22 to 18 is planned, bringing in a raft of young pension savers. Also, to align to modern working patterns, any concept of an upper age for AE is expected to be removed. There is also work to be done to address the gap in self-employed pension savings as this expanding group of workers risks being left behind. The £10,000 annual earnings trigger is also to remain in place excluding low earners, mainly women, from AE. However, they can opt in and benefit from an employer contribution.

There is no plan to further increase the rate of AE contributions.  These are based on a band of annual earnings between £6,136 and £50,000, so the first £6,136 a year is non-pensionable. The DWP is seeking to remove the offset from the mid-2020s, so contributions are calculated from the first pound, leading to higher pension contributions for employers and employees.

AE has been successful, but contribution rates need to rise. Inertia will only take people so far. Employees must take ownership of their workplace pension and make active decisions. We need to build on AE and take it to the next stage.

Kate Smith is head of pensions at Aegon

This article appeared in our May 2019 issue of The Actuary.
Click here to view this issue
Filed in
05
Topics
Regulation Standards