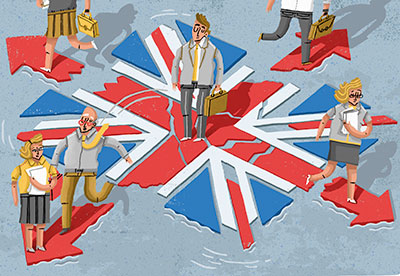 Businesses are now battening down the hatches and putting plans into action, regardless of whether the UK leaves the EU with a deal or not. Concerns are ramping up among those working in the financial, insurance and banking sectors, as Brexit will unequivocally change the landscape either way.

The UK has long benefited from free movement. London is a globally recognised hub of talent that has pushed the UK to the forefront of the world stage and international market, coming second only to the US as the world's largest financial sector (followed by China and Japan). The Single Market permitted businesses and firms to freely trade and sell services across the continent without facing any barriers.

However, an emerging problem for the insurance, finance and actuarial industries is not only retaining current levels of staff after Brexit, but also recruiting in the future. The UK's success was built on cross-collaboration and the continuous exchange of talent from all over the world. EU nationals plug vacancy gaps in the UK, from graduates and junior analysts to CEOs. Migration Observatory statistics from 2017 show the banking and finance sectors ranked among the highest in the UK labour market for recruiting EU and international workers, accounting for 17% and 20% of total employees in the sector respectively.

Diluting access to talent pools up and down the country is the arrival of the 'skills-based' immigration plan, scheduled to come into effect by 2021.

The immigration plan in post-Brexit Britain means that EU actuaries are required to meet high visa requirements and pay for the privilege. They will also have to pay for an English language test, and some may require document translation services, which, of course, come at a price.

The proposed replacement of free movement for European actuaries is expensive and restrictive. Visa fees have risen twice in the past year alone, and the Immigration Health Surcharge that migrants require in order to access the NHS has also doubled in price this January, inflicting costs of up to £2,000 to accompany a five-year visa. Couple this with a Tier 2 Visa application, and an applicant will be coughing up thousands. Even emailing the Home Office incurs a charge of £5.48.

Employers and firms looking to recruit from overseas will need to issue each worker with a certificate of sponsorship - at a cost of £1,199 for every non-UK worker they recruit per year. They will also need to apply for a sponsor licence - which isn't cheap - in order to legally hire workers from the EU and beyond.

There is, at least, a silver lining as actuaries, economists and statisticians are featured on the UK's Shortage Occupation List. Migrants looking to take one of these positions can benefit from marginal visa discounts - as long as they apply for a job through the list.

However, the fact that these roles are listed as a shortage occupation shows that the sector could be in for a shock after Brexit, when access to talent pools have shrunk. As we move towards artificial intelligence, automation and digitisation, big data and cyber security, the demand for specialised skills will increase. In turn, this will hike competition across the continent for programmers, data analysts and machine and cyber security operators. Actuaries, with their specialised skills, may prefer to take up positions elsewhere in the EU, where they can continue to benefit from frictionless mobility.

If this proposed immigration plan and the disproportionate costs involved are not revised, the fees could saddle the industry with widened domestic vacancies and skills gaps. The cost and the complexity of seeking a visa and a sponsor will only act as a deterrent to the highly-skilled talent that the UK needs the most. And, although the long-held success of the industry in the market will keep it from collapse, EU workers will continue to find employment where there is stronger job security - painting a bleak picture for the future of the sector in a post-Brexit UK.

This article appeared in our May 2019 issue of The Actuary.
Click here to view this issue
Filed in
05
Topics
Technology