Kirstie Mok, on behalf of the CMI Mortality Projections Committee, reports on trends in mortality improvements and their causes 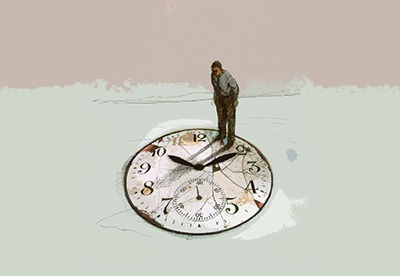 Much has been said about the slowdown in UK's population mortality improvements, since 2011. There is considerable debate on what is causing it, whether it will persist and whether improvements vary among different sub-groups.

Figure 1 shows the changes in mortality during the past 50 years, using standardised mortality rates to remove the impact of changes in the population. Improvements were historically high between 2000 and 2011, averaging 3% per year, but fell to just 0.8% per year between 2011 and 2017. There has been a particularly dramatic fall in improvements for those born around 1930 ('the golden cohort'), who had previously experienced exceptionally longer lifespans.

There were specific reasons for the large mortality improvements between 1975 and 2010, including the reduction in smoking rates and cardiovascular diseases. These are unlikely to be repeated in the near term, at least. Public healthcare spending also grew rapidly during that period; in comparison, between 2009-10 and 2015-16 it grew by only about 1.3% per year. This was the lowest five-year average since records began in 1955-56. This slowdown in spending has been exacerbated by the demands of a growing and ageing population.

One result of the UK's ageing population is the rising prevalence of neurological disorders such as Alzheimer's, which have become an increasingly common cause of mortality, although this is also partly due to changed reporting practices. Alzheimer's is sometimes referred to as 'Type 3 diabetes' owing to the link between the disease and insulin resistance in the brain. 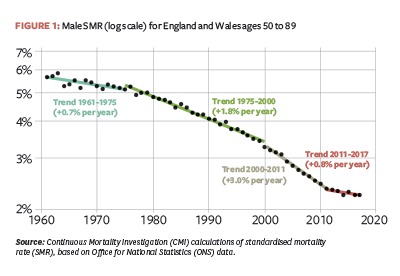 In the UK, diabetes diagnoses increased by a factor of 2.6 for men and 3.3 for women between 1994 and 2016. At older ages, the mortality of a diabetic is roughly twice as high as that of a non-diabetic, and the World Health Organisation predicts that diabetes deaths will double by 2030. If the current trends of high-carb diets and sedentary lifestyles continue, these predictions are likely to be borne out.

Short-term drivers should become a key part of the discussion around mortality improvements. For example, the drop in improvements for the golden cohort could partly be explained by the interaction between ageing and dependency on social and healthcare services. This cohort were in their 70s to 80s during the 10-year period to 2010, when the highest improvements were seen, reflecting behavioural changes; now, in their late 80s, they will be more dependent on health interventions.

Figure 2 shows mortality improvements during the period 2001-16 by socio-economic group (reflecting the wealth of the area in which they live), compared with England and Wales as a whole. Higher socio-economic status was linked to higher mortality improvements for all three five-year periods, for both males and females. All groups had lower improvements between 2011 and 2016 than was seen in earlier periods. (For more on this issue, read our feature 'Material Benefits' on p20-21 of this magazine.)

Some recent research publications have revealed the inverse of the above pattern of mortality improvements, with lower socio-economic classes showing the highest improvements during the period 2001-2010. These contradictory findings may relate to the data underlying the analyses (pensioners vs general population).

The level of volatility also varies between socio-economic classes. The increased volatility in mortality improvements in recent years may have come from the lower socio-economic groups. These groups are more reliant on social care and public healthcare funding, so they are more impacted by changes in government policy.

The outlook for mortality improvements remains unclear. Low improvements may continue to be the norm, given the constraints on health and welfare spending and the rise of other diseases. However, as one speaker noted, "In 2007, nobody predicted 3%-4% improvements indefinitely predicting the current low levels for the long-term does not seem like a good idea, either."

The views expressed are not necessarily those of the Continuous Mortality Investigation (CMI) or the speaker's employers.

Kirstie Mok is a longevity actuary.

There is room for further reductions in lung cancer deaths, from changes in lifestyle and the environment.

Medical intervention can also play a role. Early forms of lung cancer are usually treated with a combination of surgery, chemotherapy and radiotherapy. However, the cancer is much harder to treat once the tumours have spread to other organs in the body (metastatic cancer). Immunotherapy is an exciting new development in this area; the treatment involves using the body's own immune system to battle cancer cells and has been proven to be effective in medical trials.

The treatment uses drugs classed as immune checkpoint inhibitors; these block the proteins that stop the body's immune system from identifying and attacking cancer cells. Four drugs have been approved for non-small cell lung cancer (one of the main forms of lung cancer).

In a recent trial, the drug Nivolumab was shown to improve the survival rate of patients to over 40% over a two-year period, compared to a survival rate of under 20% using chemotherapy alone. The survival rate using immunotherapy can reach 75% in some cases, and it can also be used to treat other cancers: Nivolumab has been approved for eight different types of cancer. Immunotherapy costs more than £100,000 per patient per year; the NHS is struggling to afford such treatments and has already rejected some cancer drugs. Unless these drugs become more affordable, it is unlikely that their use will become widespread.

This article appeared in our April 2019 issue of The Actuary.
Click here to view this issue
Filed in
04
Topics
Health care