Deprivation and life expectancy in the UK

Torsten Kleinow, Andrew Cairns and Jie Wen take a look at a recent report investigating the links between deprivation and life expectancy in the UK 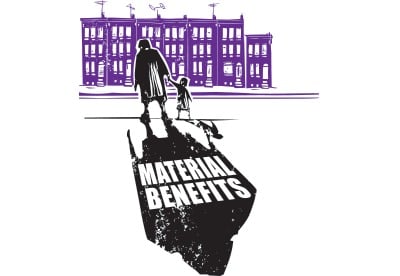 It is widely acknowledged that life expectancy in the UK and other countries is linked to socio-economic variables, with the rule of thumb being that those who are best off in life live the longest. The data for England published recently by the Office for National Statistics reinforces that rule, but also allows us to quantify this statement and investigate how large the differences in mortality rates are - and how differences are changing.

The ONS data, published in November 2018 (www.ons.gov.uk), consists of death counts and mid-year population estimates for 10 socio-economic groups, distributed by level of deprivation. Here, deprivation is measured by the Index of Multiple Deprivation (IMD), which combines different metrics.

A first look at the one-year probability of death at specific ages shows that the differences are rather large: for example, 70-year-old women living in the most deprived areas are about two to three times as likely to die within a year than those living in the least deprived areas (see Figure 1). For many adult ages, these differences increased between 2001 and 2017. 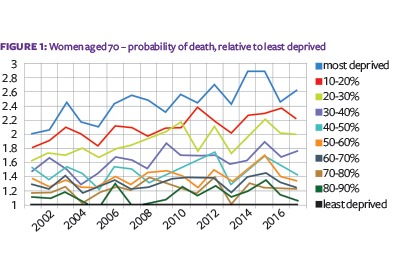 While it might be no surprise that the cumulative effects of deprivation over someone's lifetime lead to higher mortality rates at adult ages, we also find large differences at other ages, and even for infant mortality rates (see Figure 2). Infant mortality in the most deprived areas is about 2.5 times higher than it is in the least deprived areas. It seems that this ratio is slightly smaller now than it was in 2001, but the impact of deprivation on mortality is large even in early life. From the data considered in this article, it is not clear whether this is mainly related to the health of the parents, differences in access to medical facilities, or other factors.

How do these mortality rates translate into life expectancy at birth and the chances of living to age 90? We base our calculations on period life tables and start by considering the probability of women living to age 90 (Figure 3).

We find that survival probabilities to age 90 have increased for women in all socio-economic groups, but they have improved the most for the least deprived. In fact, the chances of surviving to age 90 in the most deprived areas have remained flat since 2009. The gap is widening. It is also remarkable that there is almost perfect ordering by socio-economic group.

How long can we expect to live? Calculating period life expectancy from birth is not possible based on the ONS data, since population estimates are only provided up to age 89 and then one estimate for all older ages. However, we observe that mortality differences among groups decrease with age from about age 50, and differences are very small at age 89. This supports the assumption that life expectancies from age 90 are identical in all groups. In 2016, the ONS estimated that life expectancy from age 90 is four years for men and 4.6 years for women. Assuming those numbers for all areas in England allows us to approximate life expectancies from age 0 in the 10 IMD deciles. 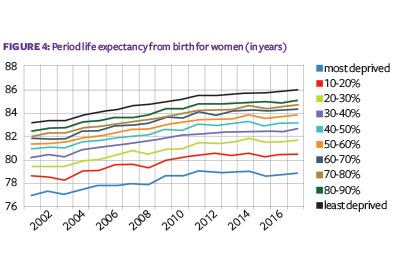 Figure 4 shows that period life expectancy for women in the most deprived areas has increased from 76.96 years in 2001 to a maximum of about 79.02 years in 2011 and reduced slightly since then, so girls born in those areas in 2017 can expect to live approximately two years longer compared to those born in 2001. Looking at the same numbers for the least deprived areas, we find an increase in life expectancy from about 83.21 years in 2001 to 85.55 years in 2011, and 86.00 years in 2017, so an overall increase of about 2.8 years. Again, the already significant differences in life expectancy have increased further, with the gap widening by about 9.5 months. The gap has also widened for men, but only by about four months.

During the same period, 2001-2017, life expectancy from age 65 has increased by just under a year for women in the most deprived areas, from 17.36 to 18.26 years. This compares to an increase of more than two years for women in the least deprived areas (20.57 to 22.70 years). For men, the increase is from 14.03 to 15.79 (most deprived) and 17.94 to 20.76 years (least deprived). Keeping in mind that individuals living in the least deprived areas are more likely to have large pensions, those numbers suggest that pension liabilities would be underestimated if national life tables for England are used for valuation.

Our conclusion must be that the longevity gap has been widening in the early years of this century. We should not just assume different mortality rates for different groups, but also different improvement rates - at least in the short term. 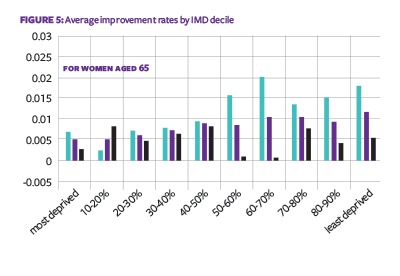 However, returning to mortality rates at individual ages, the picture is not so clear. For example, Figure 5 shows the average improvement rate for women and men aged 65 by IMD decile where averages are calculated over different periods. Averaging over all 16 rate changes from 2001 to 2017 shows that, for both sexes, rates have improved by about 0.5% per annum for the most deprived and about 1.2% for the least deprived. The longevity gap is widening. However, splitting the period into two sub-periods shows that those differences are coming from the early years. Improvements since 2009 for all socio-economic groups are very small, and there is substantial uncertainty about the improvement rates. In other words, the well-known fact that the long period of strong longevity improvements has come to an end in the UK seems true across all socio-economic groups.

In summary, there are substantial differences between mortality rates in different socio-economic groups. This is reflected in life expectancies, chances of surviving to old age, and infant mortality. There is no evidence that the mortality gap is closing, although it might have stopped widening further. However, this is not a consequence of the most deprived areas catching up with those better off. It is rather a consequence of improvement rates having dropped across all socio-economic groups in recent years; the already low improvement rates in deprived areas simply did not drop as much as those in the least deprived areas.

Having said that, we should also keep in mind the substantial uncertainty about improvement rates mentioned earlier. Any attempt to reduce the projection of mortality to simply specifying short-term and long-term improvement rates fails to take that uncertainty into account. We therefore argue that models that simulate mortality scenarios and quantify uncertainty are more accurate than deterministic projections. The ONS data tell us that those models should take socio-economic differences into account.

This article appeared in our April 2019 issue of The Actuary.
Click here to view this issue
Filed in:
04
Topics:
Health care