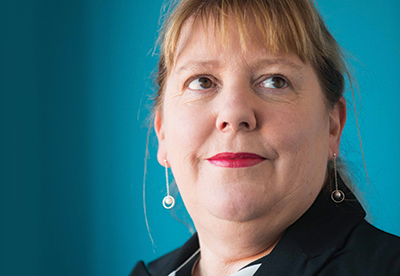 Hilary Salt is a founder of UK pension consultancy First Actuarial, a member of IFoA Council and sits on the Pensions Board. She has been heavily involved in the negotiations between the Communication Workers Union (CWU) and Royal Mail on the agreement to establish a collective defined contribution (CDC) scheme, subject to UK legislation being amended to permit it.

We meet at the IFoA London offices, where Salt sits down and gets straight to the point.

"We currently have a pensions industry that cannot provide a pension," she says. "With individual defined contribution (DC) arrangements, it is really hard for people to turn them into an income for life. The way we can provide a wage in retirement is by using collective solutions."

Salt explains that CDC pools investment risk to reduce costs, but more importantly also pools longevity risk to help prevent those who live longer than average from running out of money. "The other thing is fungibility, which is my favourite word," she adds. This refers to the seamless conversion of the accumulated fund into a retirement income without the need to disinvest and then reinvest.

Initially, at least, Salt expects that only a small number of larger employers, such as Royal Mail, will adopt CDC to both accumulate contributions and provide a pension. "I think in the short term, the big growth in CDC will be as a drawdown vehicle in retirement. It should be the default safe harbour approach to drawdown." Salt says that people have "lost confidence in pensions", and believes this discourages higher levels of pension savings while also making it hard for an employer to attract, retain and retire its workforce. "I do think employers must accept some responsibility; lots of them closed down perfectly affordable, efficient defined benefit (DB) schemes." She would also like to see a larger state pension as a foundation on which to build.

I ask about the future of the annuity market. "It's disappointing that freedom and choice has not resulted in the pension industry finding more appropriate ways for people to provide an income for life," she says. "Annuities are a sensible answer, but the public perception is that they are too expensive, which is true." Salt speculates that less stringent reserving requirements for UK insurers post-Brexit might enable less costly annuities, and also suggests that the ability to purchase deferred annuities at retirement would help manage longevity risk.

The conversation turns to the financial management of DB schemes, and the UK Pension Regulator's (TPR) expectation that trustees consider funding, investment and the strength of the employer's covenant within an integrated risk management (IRM) framework. "I am absolutely not a fan of IRM and think it will mean worse outcomes for members, with more schemes being closed. Covenant is a regulatory invention; it's not in the legislation, which says you can have a scheme-specific funding requirement that should be based on a prudent estimate of the return on your asset portfolio. We call it 'Schrödinger's pension fund'; you can see an employer's covenant for a year or so, but not for 40 years, so the employer's covenant is in the box." Salt is concerned that the focus on covenant is contributing to the increased asset allocation to bonds and funding for an insurance buy-out.

"As a trustee, if you don't take risk, you guarantee it will never get better," says Salt. She believes that risk aversion is being encouraged by actuarial consultancies and professional trustees, who are protecting their reputations in case things go wrong. It is also restricting scheme actuaries' ability to use their professional judgment.

The Pension Protection Fund (PPF) is a lifeboat for the DB schemes of insolvent employers, funded by a levy on all DB schemes. One of TPR's duties is to minimise financial strain on the PPF. "TPR's and trustees' interests are in conflict. It's not in the trustees' interest to protect the PPF, which exists so that schemes can be run efficiently, with a sizeable allocation to growth assets, and in the event that the employer becomes insolvent members have the protection of the PPF."

Salt adds that TPR will be more biased towards investment in bonds and averting company insolvencies, in order to safeguard the PPF. "Pensions have become a bit of a barrier to insolvencies." This, she says, is inhibiting the industrial renaissance needed to help provide future UK prosperity.

What are Salt's views on DB scheme members transferring the value of their benefits into a DC pension? "The problem is that pension schemes are invested too prudently, which makes the cost of benefits really expensive and hence transfer value high. Legislation and actuarial guidance is very clear; you can't give a low transfer value when invested in bonds. While I do not think it is likely to be in most members' interests to transfer, I have a bit of kudos for those who are willing to say, 'I'm not going to buy a guaranteed negative real rate of return, I'll have a proper balanced portfolio, take a little bit of risk and give myself a chance of doing a lot better'."

For transfers worth £30,000 or more, members are legally required to take independent financial advice before they can proceed. "Most people have made their mind up to transfer before they seek advice - why do people have to pay for advice which tells them not to transfer, when they going to do it anyway?"

I ask about enhanced transfers, where the sponsoring employer provides funds to make transfer values even higher - and hence more attractive. Salt questions whether this is good use of employer money.

On the High Court ruling requiring equalisation of Guaranteed Minimum Pensions, Salt is adamant that it "will create a huge amount of work for lawyers, actuaries and administrators, but tiny additional benefits for people" and is "a catastrophic waste of time".

We turn to climate risk. "There are all kinds of risks, such as a nuclear war, which I cannot say how to take account of, but I am professionally required to advise on how to take account of climate risk. I've no idea how to do so," she says. "Sustainability is a very low aspiration to me; I want to reach the moon and be aspirational. We need to drive society forward, invest in industry, be as rich as we can, and then we can deal with climate change."

Salt also has strong words on investor activism. "I think it's a real scandal that the big passive index tracker providers don't let pension schemes vote their shares. Why can't they vote 2% this way, 8% that way?" she asks.

Salt had an unusual start to her actuarial career. After leaving school, she had short spells in general insurance and pension consultancy, before going to university to study politics and modern history.

"It was a really exciting year group, including two current MPs - one in the shadow cabinet, one on a DWP Select Committee," she says. She started her business while at university. "I had a mortgage and needed the income, so I began working for trade unions, including pension training, which I still do." Sometime after leaving university, she sold her business to Hazell Carr, and it subsequently transferred to help create First Actuarial about 15 years ago.

"A lot of my clients are trade unions that I work with on their own pension schemes, but also on policy work," Salt explains.

"I am meeting lots of people, like philosophy and geography professors, who have also developed an interest in pensions, which is really exciting." Salt believes the profession should be more engaged with the public - encouraging debates about pensions, for example. She suggests that universities can be a good platform for such activities, and that we might involve public intellectuals on working parties.

"I'd like to find a neat explanation of actuarial work," she says. "When people ask me at parties, I say we use economics and statistics to answer 'what if' questions. More people know what an actuary is because of the work we have done with CWU and Royal Mail. I was in a bar in Manchester and a postman came up to me and asked if I was Hilary Salt the actuary and wanted to shake my hand."

When it comes to her work for the IFoA, Salt claims not to like the term 'volunteering'. "It makes you sound like an untrained do-gooder; I prefer 'activists' or 'lay active members'."  She says she is aware of the challenges of volunteering for time-constrained younger members, and those working outside of London. She feels that a more proactive approach to seeking volunteers would be helpful.

However, she ends by saying: "It's really interesting to work with people from different fields, and that's one of the strengths of the actuarial profession."

What advice does Salt have for young actuaries?

"Stop being so obsessed with doing things like working from home; you don't change the world from there. You need to engage creatively with your colleagues from inside and outside the profession, to hone ideas and skills, to put you in a position where you can change the world. Aspire to do that."

This article appeared in our March 2019 issue of The Actuary.
Click here to view this issue
Filed in:
03
Also filed in:
Interviews
Topics:
Environment