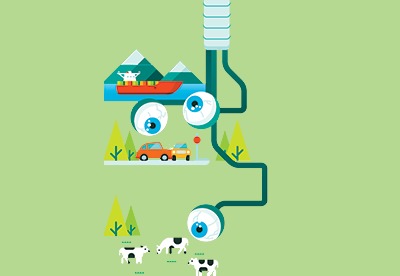 Imagine a world with connected sensors everywhere, observing nature, traffic flows, energy use, crowds and buildings, then feeding that information to algorithms that analyse, learn and advise. This is the Internet of Things (IoT).

Sensors have been around for many years, but with the IoT we have entered a new paradigm; indeed, some have described it as the 'fourth industrial revolution'. What is different this time? In short: scale and speed. We are observing a global explosion in the number of sensors connected to the internet, a vast increase in computing power, the ability to store huge quantities of data cheaply, and algorithms to provide rapid analysis. Within a very short time, everyday objects such as fridges, energy meters, watches and vehicle black boxes will be the majority of the world's data producers.

How will the IoT help insurers? Well, first, we will know where our assets are and whether they are performing as planned. After a disaster, the sensor information will allow us to quickly assess the extent of the damage and plan our response. We can monitor whether ships we have insured are following approved routes, or whether medical or food supplies have remained within the temperature tolerances that keep them safe. When risks are identified, corrective action may be taken remotely. Monitoring and corrective action will help reduce human error and other accident rates, meaning insurers should see a reduction in high-frequency, low-impact claims. Casualty policies should also see a reduction in claims related to errors and omissions. The IoT will permit pre-emptive action by helping to predict failures in advance - indeed, we could start to see a greater prevalence of insurance that triggers on a forecast of loss rather than an actual event.

Other sectors have been fast to explore these new features - particularly transport, logistics and retail, where their use is becoming integrated within resource planning. We are also seeing increasing use of sensors in farming, where they are used to monitor the soil, weather and livestock.

Knowledge often moves forward when diverse fields come together. So it is with the IoT through the coupling of technologies. For example, cloud-type storage has almost unlimited data storage and vast capability for analysis, whereas local storage devices have much less. Linking cloud-type storage and local storage together increases the reach of the IoT, and boosts its potential still further.

Further benefits will accrue from future developments such as fog computing (also known as edge computing), which sees more powerful local devices performing calculations in situ, speeding up response times. The 5G mobile network, once deployed fully, will lead to more data being transferred - and at ever faster rates.

The use of advanced artificial intelligence methods is also increasing. Neural networks, for example, can find non-linear patterns within data feeds, and allow a more bespoke and tailored response to telemetry. Blockchains can be the medium through which the data is shared, adding trust and transparency, which can be crucial when it acts as the trigger in a smart contract. Encryption is also key when it comes to protecting privacy and preventing tampering.

Some new technologies are both IoT devices and data users. Robots, for example, can make use of a network of sensors in carrying out their activities, but they also produce data while they are doing so. Augmented reality systems take sensor information in various forms and overlay it onto traditional visual displays.

In short, the IoT represents a fundamental shift in our ability to understand the world around us. If we are careful, we can have a more equitable future, better standards of living, more leisure time, safer, more efficient environments and longer, healthier lives. As with any new technology, there are also risks and pitfalls - and these must be understood in order to be avoided.

We are used to digital devices having short lives - the first iPhone was released in June 2007, a little over 10 years ago, and we are now on version 10. However, many IoT sensors will operate for decades, meaning that any fundamental vulnerability will be long lasting.

Unlike traditional digital devices, which can be switched off or rebooted, IoT devices will often be 'always on'. Previously unconnected devices will be coupled together to create systems

of systems, resembling ecosystems in nature. Like their natural counterparts, we may start to see cascading or emergent features, as well as chaotic behaviour that can be hard or impossible to predict. Bad data from one device could pollute another, and this could lead to errors being amplified and propagated through the network. We will need a new information theory to combat these effects.

Additionally, every device is a point of attack, so a greater focus on security will be key. Recent large denial-of-service attacks, which infiltrated systems through multiple connected devices by cracking standard passwords, are a portent of things to come.

Many sensors use similar technologies. If a shared component develops a persistent error or vulnerability, this could lead to a systemic fault that may be hard to spot initially, since the outputs would appear to be corroborated by other devices. This is linked to another issue: it can be hard to attribute the cause of failure to a particular device. Failures may arise due to the accumulation of factors, none of which would cause issues alone. In such cases, the best we can do is to attach a probabilistic assessment of fault. Statements such as 'the component fault made the adverse event 20% more likely' are likely to be used frequently in future. This may affect the interpretation of liability policies.

The IoT creates a much wider attack surface for cyber risks, and as this is a nascent class of insurance we will need to adapt quickly.

Regulations always struggle to keep up with new or fast-changing fields. This has been a common feature in Lloyd's Emerging Risks reports over the past decade: from nanotechnology and virtual reality to synthetic biology and climate change. The IoT is no different. The EU recently consulted on whether the Product Liability Directive requires amendment in order to cater for the IoT. Views were split roughly 50:50, with some in the sensor industry arguing for no change and consumer groups the opposite. The case for change includes:

The IoT generates granular and real-time data, capturing patterns and behaviours across the economy and the natural environment. It will enable proactive monitoring and proactive risk management, which could help us to avoid preventable losses and reduce information asymmetries.

New forms of insurance may arise as claims are reduced in frequency, and in some cases lessened in severity. Smart contracts with parametric sensor-driven triggers may improve the claims process. Advanced data science talent will be required to engage with this new world, and actuaries are well placed to play a key role - provided they upskill as necessary.

We will know so much more with an additional 50bn pairs of 'eyes' on the world. The challenge for the insurance industry is to be ready to make best use of what these eyes see.

Trevor Maynard is head of innovation at Lloyd's

This article is based on a report published by Lloyd's Innovation Team, in collaboration with University College London and the PETRAS network.

This article appeared in our February 2019 issue of The Actuary.
Click here to view this issue
Filed in
02
Topics
Global