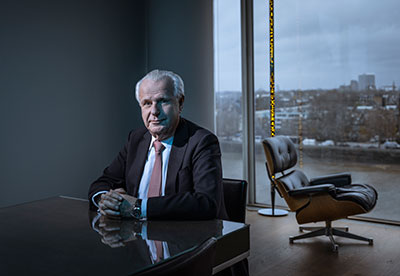 Lord Paul Myners CBE has had a wide-ranging career, mainly in financial services but also taking in sectors as diverse as journalism, education and business. His appointment as the UK's financial services secretary -  or 'City minister' - coincided with the 2008 financial crisis, and he was instrumental in supporting the banking system. Does he think such a crisis might reoccur?

"We have not learnt all the lessons," Myners says. "Future crises tend to appear in different places from their predecessors; we develop policies to address past risks and don't always anticipate the future." He expresses concern for the increasing ratio of global debt to GDP and high borrowings in the corporate and private sectors, against a backdrop of low interest rates. "Risk appetite has increased markedly, but we have more capital, and regulators are now smarter and better coordinated."

Myners would like to see banks even better capitalised, but explains: "We are still living with the consequences of quantitative easing; the yield curve is too flat, and until we get a normalisation of interest rates, banks will find it hard to raise more capital. I think it will take several decades before quantitative easing is completely out of the system, because it will largely be achieved as bonds mature."

Myners connects the polarisation of global society since the financial crisis with the rise of populism. "People on ordinary or lower incomes are angry about the way those who are better off seem to have ridden through the crisis and austerity without any great damage. That led to what some would call populism, and I think that underlaid the Brexit decision."

Brexit, as Myners explains, involves a trade-off between UK independence and the economic consequences, which he describes as "lower economic growth and investment, and probably higher inflation and interest rates". He feels this compromise was a difficult matter to put to a binary referendum, and created a dilemma for the many members of Parliament whose constituency vote was in favour of Brexit but whose own judgment leans towards Remain.

Myners believes this wave of populism has influenced the lack of debate around the negative impact of Brexit on financial services. "You cannot get a leading banker or many leading business people to go on the record on these matters, because they feel they are just drawing hostility towards themselves," he shares.

"Historically, the financial services sector has been an important driver of economic output and productivity - probably too important. It has sucked too much talent and capital away from other areas, and one of the reasons we continue to perform poorly in terms of manufacturing investment and productivity is because of the dominance of the financial sector, which is also regrettably rather geographically concentrated in London."

I ask Myners about the impact of fintech on financial services. "In my view, it does not presage the arrival of a whole range of new competitors who are going to pull the carpet from beneath the incumbents," he says. "It will largely be reflected in the use of technology, big data and artificial intelligence (AI) by existing leaders, who will transform their business model to become more efficient, and most of those efficiency gains will be passed to their clients. I suspect that blockchain will be much more transformational than most of the other things that appear under 'fintech'.

"I can foresee AI being increasingly central to a whole range of analysis such as the likelihood of events and their impact, projections of diversifying risk through non-correlated assets and other things, which would be done much more efficiently by a machine than a human."

Myners is less confident about the spread of robo-advice, whereby an algorithm is used to constantly rebalance a portfolio to reflect risk appetites using low-cost investment media. While he sees continued growth in wealth management, he says: "I don't see the emergence of a significant scalable robo-adviser in the area of the work of actuaries."

We turn to the topic of Myners' Autumn Lecture for the IFoA - defining 'long term' in investments. "I think that significant investment returns have been missed by this short-term focus," he says. "You don't win a marathon by being first every quarter of a mile. If you take a longer view and invest sensibly in less liquid assets, you're likely to secure a premium return for accepting reduced liquidity."

He sees this as being supportive of an approach to equity investment that leads more to 'voice' (active engagement as owners with investee companies) as opposed to 'exit' (high portfolio turnover and a reluctance to stick around to help fix issues in portfolio companies). "When I put 5% of your assets into an illiquid asset, exit is not an option. Therefore voice is the way in which you protect and enhance that investment's value."

Voice means taking an active interest in the running of the business. "I fret about what I would describe as the 'ownerless corporation'," Myners says. "Our major public companies are now so widely owned by institutions, who in turn own their competitors and suppliers, that stock-specific focus is almost non-existent."

When it comes to active management, Myners believes it's "almost impossible to beat the market consistently by replicating it and making little tweaks, a bit underweight here and a bit overweight there. I'm less convinced that Eugene Fama's efficient-market hypothesis means it's not possible for high conviction managers to beat the index." A particular concern of his is the holding of underweight positions in a portfolio - making an investment in a share which the manager expects to underperform the index but where the manager lacks the confidence to not invest through fear of being wrong. "Quite frankly, I am baffled as to why clients would pay fees for this."

Quarterly monitoring, he says, encourages short-termism in investors - for example, when it comes to pension schemes. "Should pension trustees really be monitoring their managers' performance over the last 90 days?" he asks. "Is that relevant to a pension scheme which could still be paying out in 50 years' time?" In the event of under-performance, he suggests trustees should ask: "Has there been some deep structural change at the manager, or is this just part of the natural cycle?"

Myners believes that active managers' lack of conviction means few stand out from the pack. Referring to the way most pension scheme investment portfolios sank to a similar extent during the 2008 crisis, he observes: "As Keynes said, it's better to be wrong when everybody else is wrong."

The Myners Principles, published in 2001, were concerned with investment governance in pension schemes. "A number of areas in my report have become accepted wisdom. Scheme governance has got better, particularly for larger schemes, but there's still a lot of poor leadership.

"You have this inversion in pension investment management. The trustees who make the most important decisions of all, around risk tolerance, asset allocation and manager and adviser selection, are the least experienced, and get paid next to nothing for doing what they do. On the other hand, the investment managers, who have the greatest experience and who are the best paid, are making the most insignificant decisions on share deals." He welcomes the rise in professional pension trustees, but feels too many come from the industry and simply replicate past practice.

Myners questions the wisdom of discounting pension liabilities at the current low long-term interest rates, which have been manipulated through quantitative easing. "We are pushing pension funds into a form of reckless conservatism of buying more bonds," he says. "Investors who are not constrained by benchmarks or by actuarial models are not currently filling their pockets with long-term debt, but that's precisely what defined benefit pension schemes are doing. It is also hastening the closure of these schemes, because they appear to be even more expensive than we thought they were."

On the influence of the UK Pensions Regulator in this regard, Myners notes: "All the incentives for a regulator are to avoid things going wrong, and they have largely gone unchallenged on this particular issue. In my view, an enlightened regulator should be more in the public eye, promoting debate and discussion, and working with academics and others to ask questions, such as on pension scheme design." Myners welcomes the UK government's recent review of the powers of the Pensions Regulator, noting that "it has simply not posed a sufficient challenge to those who try to game the rules".

A word of advice

Does Myners have any advice for young actuaries? "I suspect one should not give advice to young people, particularly since the world is so different now," he reasons. "I've always been very curious, and that's one of the reasons why I've done so many jobs and worked in so many different sectors. My mother was a huge influence on me, and she couldn't understand how one day I would tell her I was deputy chairman of an electricity generator, and the next time I saw her I had become chairman of a retailer. I think it's the enriching experience of satisfying curiosity, so I would encourage young people to be curious and challenging."

This article appeared in our February 2019 issue of The Actuary.
Click here to view this issue
Filed in:
02
Also filed in:
Interviews
Topics:
Careers