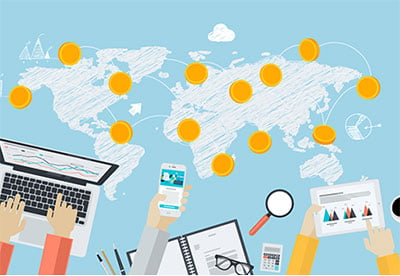 A digital currency can be defined in many ways. Some will be backed by distributed ledger technology (DLT), which removes the need for commercial bank intermediation and allows payments to be made directly between payer and payee. The disadvantage of DLT is that it requires the payment to be authorised, perhaps by 'miners', as is the case for bitcoin. This verification process poses issues as there is a maximum number of transactions that can be processed at a time, and the power requirement to do so would be very large if the currency is widely used. Many refer to digital currencies that use DLT technology as 'cryptocurrencies'.

The values of cryptocurrencies, such as bitcoin, have risen and fallen dramatically throughout 2018. This high volatility has stirred interest from a wide range of investors, some of whom think of cryptocurrencies as 'crypto-assets', instead of currencies. The currency characteristics of cryptocurrencies are eroded by the fact that although they can be used for payments - anonymously and outside banking infrastructure - acceptance of those payments is far from widespread.

Both the Bank of England and the US Federal Reserve believe cryptocurrencies are not likely to reach a volume that would pose a risk to sovereign stability, at least in their current format. Globally, central banks have been researching the introduction of CBDCs, over which they would have complete control. The CBDC would be exchangeable for the country's fiat currency and used to implement monetary policy, making it more secure and less volatile.

The implementation of a CBDC is not an entirely new phenomenon: the Bank of England already provides electronic accounts to banks and key financial institutions. There are two factors that a central bank needs to consider, should it decide on the use of a publicly accessible digital account: the technology required and the economic reasons for its introduction.

It is often assumed that the technology is available. However, the actual shape of such technology has not yet been defined. The central bank payment system would likely be less intricate than the use of DLT. In order to maintain the distributed ledger - something that is only required in systems with distrusted participants - DLT involves significant computational costs for network participants. However, the most important consideration is the economic implications of a CBDC.

In May 2018, the Bank of England released a staff working paper that constructed three models for CBDCs, which vary according to the sector that would have access to the CBDC. In the widest access model, the Bank proposes that access to the CBDC would be granted to all sectors of the economy, including the general public. Under this approach, the CBDC would be made available by the central bank alongside cash and reserves.

This would enable individuals to hold a bank account directly with the central bank. It would be expected that the central bank would guarantee convertibility between cash, commercial bank reserves and the CBDC at a 1:1 ratio.

Deposits held directly with a central bank could potentially be more secure, as they would not be exposed to commercial balance sheets and their inherent risks. This would reduce dependence on commercial banks, decreasing the systemic importance of these institutions and perhaps enabling governments to remove costly government guarantees on deposits.

A CBDC could also create significant risks for commercial banks. Their reduced capacity to hold money with the central bank could cause commercial bank 'runs' - particularly at times of market instability. This could inflict great stress on the banking sector and the fractional banking economy.

A widely used CBDC, accessible to all economic agents, could impact banks' ability to fund. Commercial banks' ability to create money through the fractional reserve system, as they currently do, would then be reduced. Over the long term, this could provide the central bank with greater control over interest rates and, subsequently, allow it to further influence levels of private lending. However, in the near term, this would entail a sizable shift in the financial system, and would require titanic operational changes - fundamentally changing the banking system as we know it, and affecting market and credit risks. Commercial banks may compete with a CBDC by offering higher interest rates to depositors, overdraft and lending facilities, payment facilities, and the ability to handle multiple currencies.

The central bank is the ultimate supplier of central bank reserves, bank notes and CBDC, and so would be able to set related terms and conditions to implement monetary policy. Deposits being made at the central bank, rather than with commercial banks, would make negative interest rate policy (NIRP) more feasible as a form of monetary policy (see section 5 of the IFoA paper A Cashless Society – Benefits, Risks and Issues). Currently, there is effectively a 'zero lower bound' on base rates. In an economy with no physical cash, it would be possible to implement a NIRP to affect economic growth, as depositors would not have the alternative option of holding physical cash at, effectively, a zero interest rate.

Another monetary policy that would become operationally feasible through CBDC accounts is the transfer of 'helicopter payments' to depositors in order to stimulate the economy. This would enable the central bank to create money and provide individuals with additional cash, thereby increasing spending and stimulating growth. This is possible without the use of a CBDC - in 2011, for example, the authorities in Hong Kong distributed part of the government's fiscal surplus to the public through direct deposits of HK$6,000 into the bank accounts of eligible citizens and through cheques distributed via Post Offices. From an administrative perspective, this would be simpler to carry out with a CBDC.

Across the world, there are widespread differences in central banks' attitudes to CBDCs; many are researching the topic without committing to creating one. Sweden is the only European country whose central bank (Riksbank) is seriously considering the possibility of introducing a CBDC. It has started a project examining whether the krona needs to be issued in an electronic form - an 'eKrona'- with the inquiry expected to be finalised in late 2019. In contrast, Jerome Powell, chair of the US Federal Reserve, has stated that the Federal Reserve is not considering a digital currency.

Among emerging and frontier markets, several countries have already introduced CBDCs. One of the earliest adopters was Tunisia, which in 2015 issued the eDinar, a blockchain digital national currency. It was closely followed by Senegal, which issued a blockchain-based national currency in 2016. Venezuela issued its digital currency, the petro, in February 2018, to avoid international economic sanctions. It is backed by oil reserves, but the exact mechanism behind this remains unclear.

While the likelihood of CDBC issuance by large, developed economies remains low, countries at other stages of economic and political development may benefit from them. Some of the benefits arise from the increased efficiency CBDCs offer when it comes to financial transactions and inclusion. They may also eliminate the need for a trusted service provider and reduce high cross-border transaction costs. CBDC transactions could avoid costs such as payment processor fees and exchange rate charges. Digital payments could be completed in a few minutes, rather than waiting for three to five business days to complete a cross-border transaction.

Nevertheless, CBDC issuance should be subject to careful consideration, regardless of the status of the issuer. Central banks need to understand their potential effects on interest rates, financial intermediation and economic stability. Launching a CBDC entails large risks as potential economic disruption could outweigh the desired, but mostly untested benefits. However, what is right for some developed economies may not be true for developing ones, where risks and benefits are inherently different.

Orla Ward is a risk and analytics actuary at Legal & General

This article appeared in our December 2018 issue of The Actuary.
Click here to view this issue
Filed in
12
Topics
Technology
Modelling/software
Finance