A foot in the door

Andreas Tsanakas and Laure Cabantous report on how keeping internal capital models ajar can facilitate their embedding within organisations.

Internal capital models are increasingly used across the insurance business, including in reinsurance optimisation, risk appetite and business planning. While this expansion is well documented, less is known about what modellers do in practice to embed capital models within their organisations.

To address this question, we interviewed 31 insurance practitioners - primarily modellers, but also underwriters and board members - working in London market insurance firms, as well as regulators. We found that modellers facilitate the embedding of the internal model in two ways: they keep the model 'ajar', by selectively 'opening' it to stakeholders, and they create a model that is flexible enough to be consistent with multiple conceptions of uncertainty.

Modellers expose parts of the model to modification or debate by stakeholders, enabling them to have a say in model development. However, such 'opening' is selective, referring only to aspects of the model that resonate with each stakeholder's concerns. The model is thus not fully 'open' - which would undermine its usefulness - but nor is completely 'closed', which would prevent stakeholders' buy-in. In Table 1, we give a summary of the modellers' activities that help maintain the model in a state of 'ajarness', or partial opening.

To provide one example, modellers generate business recommendations (A5) with the model. For this, they reveal to underwriters the modelled relations between inputs (for example, the Loss Ratio assumptions and planned premium) and outputs (for example, portfolio performance). As a result, the values of model parameters for the line of business considered are sometimes discussed, as explained by a senior actuary:

"You'll always see challenge of model assumptions from the underwriting side because it's affecting their business plan. If we turn around and say, 'we think this account's poor and isn't going to make you a good return', then that may affect how much of that income they can write next year. So underwriters will challenge that."

The use of the model, while supporting underwriters' decision-making, also generates concern as to whether the model's recommendations are consistent with underwriting judgment (C4). When underwriters sense such inconsistency, they can dispute the validity of the model, including that of key statistical input parameters. Modellers respond to this challenge by negotiating the model specification (A6) with them. The model therefore becomes the result of a negotiation, to which modellers' efforts to satisfy their own concerns around technical validity (C1) and realism (C2) form a baseline, rather than the last word. 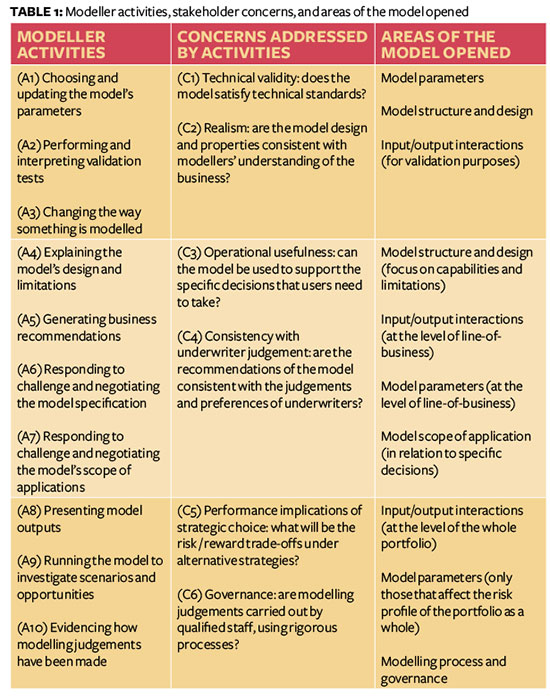 Despite the fact that all stakeholders deal with the same model, they have different modes of engagement with it, which depend on their conception of the model and concerns (or uncertainties) about it, as presented in Table 2. Modellers facilitate the expansion of model use by creating a model that is flexible enough to accommodate such multiple understandings of the model.

Modellers experience the model as a mathematical/statistical representation of the world - that is, the business and its external environment. This conception of the model is aligned with a view of uncertainty as referring to the existence of multiple such representations that pass modellers' validity and realism checks - and that may lead to different outputs. A senior actuary says:

"For certain key assumptions, we'll have alternate views. We'll sort of say 'Look, the correct assumption could be anywhere between here and here. We've picked one because we have to pick one'. And when we're doing our capital modelling we will make sure that we're looking at 'Well, what's the impact if we go at the lower end, what's the impact if we're at the higher end?' So, we can judge how material this assumption is."

This conception of a model differs from the one that underwriters and boards hold. For instance, board members view the models as calculative engines: formulas that generate performance and risk metrics under current and alternative strategies.

As a result, they can be less interested in discussing the broader meaning of model outputs than in drawing precise conclusions from them. One chief actuary says:

"I wanted the risk tolerance stuff to spark a debate, but management and risk people, they like red, amber, green charts - they like clear, defined lines."

Satisfying the board's concern about performance implications of a strategic choice (C5) requires unambiguously interpreted outputs. Consequently, modellers sometimes find that boards have a limited appetite for understanding the extent of model uncertainty. While this may serve embedding of the model, it generates a new concern: whether, through the effort to embed the model and expand its uses, crucial information about its technical limitations gets neglected within the organisation.

Boards' conception of the model-as-calculative-engine is consistent with their own view of uncertainty, as revolving around the possibility that the model produces numbers that have adverse implications, such as an excessively large level of regulatory capital. Modellers deal with this concern by running the model to investigate scenarios and opportunities (A9), an activity that enables boards to prepare for (and avoid) such eventualities. Given that sufficient validation has been performed and evidenced (A10) by modellers, boards do not spend time agonising over alternative plausible models. A board member says:

Boards are not unfamiliar with models' limitations. However, their view of uncertainty relates not to specific shortcomings of their model, but to broader limitations of quantitative modelling, particularly in relation to capturing novel and extreme risk scenarios. Boards manage such uncertainty by accepting that the model informs their judgment, but only forms one of several inputs into their decision process.

Thus, we find that the co-existence of alternative conceptions of models and uncertainty forces compromises. Modellers witness their notion of uncertainty being transformed as it journeys through the organisation: from a technical idea relating to alternative statistical assumptions, to political problems relating to the role of models in the workplace, to concerns about the implications of using the model as a formula for generating key metrics.

An extended version of this article can be found at here.

Laure Cabantous is professor of strategy and organisation at the Faculty of Management, Cass Business School, City, University of London

Andreas Tsanakas is reader in actuarial science at the Faculty of Actuarial Science and Insurance, Cass Business School, City, University of London

This article appeared in our December 2018 issue of The Actuary.
Click here to view this issue
Filed in:
12
Topics:
Modelling/software