Rosaline Chow Koo is the founder and CEO of fintech start-up CXA Group, which recently won InsurTech of the Year at the Asia Insurance Industry Awards. Sharad Bajla and Francisco Sebastian spoke with her about her journey. 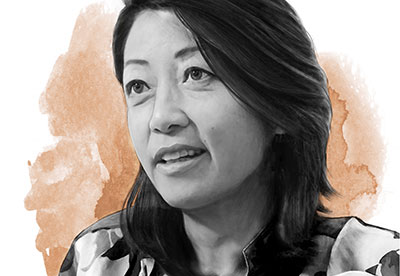 Transformation is a word that is often used when Rosaline Chow Koo talks about her career: she has successfully managed to transform her own professional path, along with the businesses she has worked at or led. Koo's first job was at a Procter & Gamble toothpaste factory in the US state of Iowa, where she gained experience in operational transformation; during her time there, she cut production cycles from three months to just three days. As a young, female manager from an Asian background who was working in a white, male-dominated environment, she also contributed to a change in the workplace culture.

Soon after graduating from Columbia Business School, a new transformation process began: she joined the banking industry and helped implement retirement services and foreign exchange margin trading around the clock. "No matter what I touched, something had to happen," she jokes. But even by current standards, those changes are no laughing matter.

Koo moved to Singapore in 1996, when her husband became head of Asia for a global management consulting firm, and took a three-and-a-half-year career sabbatical, which she spent taking care of her children. In 1999 she re-entered the workplace, pushing into Asian start-ups with Bain Capital, where she raised $35m and set up an e-business - the first pan-regional payroll outsourcer in Asia.

She next brought her experience to ACE Insurance, building a worksite marketing business that helped to disintermediate brokers, and was subsequently hired by Mercer Marsh Benefits to run their 14 countries across the Asia Pacific region.

During her eight years with the insurance brokerage firm, Koo built flexible benefits and regional brokerage mandates, managed internal conflicts between sister companies and helped build up the Asia Pacific practice. "Because we worked so hard, we grew 800%, to about a billion dollars in premium."

While at Mercer, Koo heard clients complain that brokers added little value, and tried to convince her employers to invest in technology that could add value for clients. She wanted to solve problems such as rising premiums and fast paperless reimbursements, and to explore how tailored benefits could be provided to workplaces where different generations were being covered by a 'one-size-fits-all' insurance programme. Eventually she decided to branch out on her own, and invested her family's life savings to establish the CXA Group in 2013.

This new venture uses technology to facilitate access to corporate benefits. Koo believes this adds value for customers in three areas. In the first area, rising healthcare costs are tackled through the identification of over-utilisation and the combating of chronic diseases. "No one can solve the rising cost of healthcare unless you can solve the issue of individual health," she says.

The second area concentrates on offering choice to employees, so they can manage their own health and insurance within a defined contribution plan - "people can only fix their health if they know what's wrong with them and how to modify their behaviour," Koo points out. The third area integrates the whole health ecosystem under one platform. This includes insurance companies, health screeners, third party administrators (TPAs), gyms, weight management, smoking cessation, disease management and mental health. "We are like the Netflix of healthcare, where employees and employers pay per use," says Koo. "We have hundreds of vendors on the platform and we let employees decide how much insurance they need and how they want to get healthier."

When asked how her approach differs from that of traditional brokers, Koo points out that traditional brokers still operate the way travel agencies, or the stock brokerage industry, operated before the tech transformation, with people 'manually' negotiating prices. However, she believes that, due to ageing populations and the earlier onset of chronic diseases, employers will not be able to escape increases in healthcare costs if they don't address the root causes of why people claim.

Another difference from the traditional broker platforms is how the data is collected and used. Leveraging actuarial skills, the platform identifies health and disease risks, advises on how they can be improved, and rewards employees for achievements such as weight loss, smoking cessation or diabetes reversal.

Group insurance policies for employers are priced based on their health scores - comprised of claims information, blood test results and lifestyle habits, with medical device and sensor data. The proprietary health score analytical model that her reinsurance partners developed defines the links between variables and pricing. Employers can then use that information to manage down the increase in the premium they pay to insurers by encouraging improvements in their employees' health score.

Actuaries have had a heavy involvement in the development of the business. Beyond the traditional pricing workstream, they also work in the data science division, helping improve the response for the chatbot and building predictive models or recommendation engines. Actuaries are also directly involved in analysing health data.

Fintech businesses broadly, and insurtechs specifically, are intensive in highly-skilled labour that can develop sophisticated analytics and advantageous technology. Gaining access to such expertise requires substantial amounts of capital, which Koo has gathered through a combination of rapid business growth and fundraising.

Beyond funding, for insurtech companies to be successful, she says, they have to work with the industry - if they build something on their own, they are likely to be ignored. It is difficult to get traditional insurance participants such as brokers, insurers and reinsurers to move rapidly, so the start-up has to "build all of the technology and bring everyone else along with them". Insurtech start-ups also have to show the industry that their product works, to gain traction before they run out of money.

This is where Koo's modern approach meets traditional techniques: partnerships with the bancassurance networks provide an extensive platform that helps reach out to SMEs and corporations seeking to revamp or expand group health insurance while electronically cross-selling voluntary benefits to corporate employees. Following the diversification path that Amazon, Google and other online giants took, Koo foresees that the health analytics models could be leveraged to cover both health and general insurance products (such as travel, gadget, auto, pet and accident) in the short term.

Regional diversification is also an intrinsic feature to most insurtech companies. When it comes to medium-term plans, Koo's aim is to go global. She points out that the business model doesn't just work for the insurance industry, but also for banks, telecommunications, healthcare, power, ride hailing and even e-commerce companies. "We are expanding in all types of directions that we never imagined we would go in."

Looking at the future, she thinks many different industries will enter the healthcare space, citing Amazon; the e-commerce conglomerate is moving into healthcare, and will need local partners to drive its offering forward in Asia. She also feels the industry will shift heavily towards remote sensor devices and platforms. "You have to shift most of the money towards preventing claims, rather than waiting for people to catch diseases and become hospitalised."

"Don't do a transformation at the same time you do a start-up," Koo advises, asked about the challenges she has faced. "It's quadruple the work, because once you start getting investors, your revenues cannot go down." A tech start-up competing head-on with global players needs constant attention, she explains, because it must keep growing exponentially to keep investors happy. Transforming an existing company, meanwhile, takes years. "Legacy is hard. Changing people and mindsets is hard."

On potential competition in the SME bancassurance platform space, Koo says nobody has tried replicating the model yet, and notes that the industry is probably waiting to see how her company turns out. She believes that, with all the M&A activity currently taking place in the brokerage industry, companies are "internally distracted", focusing on simply replicating their global models in the Asian region, rather than innovating.

Another challenge that she faces is attracting good senior-level talent - "no one who is super-experienced wants to leave a really good, high-paying, stable job to work at a high-risk start-up," she says. "Something similar applies to clients, who are equally risk-averse. You have to be 10 times better than the incumbent in order to move anybody."

As we approach the end of our interview, we cannot avoid asking Koo about the challenges she has faced as a woman during her professional and business career. She does not hesitate in replying that women have to work twice as hard as men to be considered just as good. "Earning your respect is so key to becoming a good leader," she says. "That's the same for men and women - but it's harder for women." She flags up the fact that women tend to underestimate themselves: many refrain from taking tougher jobs that they feel are outside of their comfort zone, while men will apply for a challenging role even if they are not fully qualified for it.

Some of the closing words from our time together might be useful for all of us, no matter where we are in our careers: "Learning skills is like riding a bike; you can't just read about it. Learning to build something from scratch, learning to see the future before anyone else does, learning to get to the future first, learning to lead - you have to do it over and over and over again to succeed."

This article appeared in our December 2018 issue of The Actuary.
Click here to view this issue
Filed in
12
Also filed in
Interviews
Topics
Careers