Haijing Wang discusses the opening up of Chinese capital markets, and the ways foreign investors can access them. 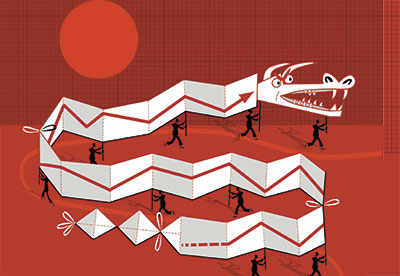 
Chinese markets have been expanding for decades, and international insurers have shown growing interest in including China in their strategic asset allocation. Asset managers often used to place China within the 'emerging markets' category, but, increasingly, large asset managers have started covering China separately in their house views of global capital markets. This article discusses topics for institutional investors looking to invest in China's capital markets, such as the channels they can use to access them and the distinct features that make China a separate asset class.

Regarding equity markets, the Shanghai-Hong Kong Stock Connect was set up in 2014. In 2016, the Shenzhen-Hong Kong Stock Connect began removing the total quota limit, marking the completion of the interconnection mechanism between the two places. Meanwhile, the Shanghai-London Stock Connect is close to being launched. Before these were set up, QFII was the main route to invest in China's stock market for institutional investors. A-shares - shares of mainland China-based companies, quoted in Chinese renminbi (RMB) - were added to the MSCI Emerging Markets (EM) Index in 2017; consequently, China's stock market has started to attract more global investors and capital.

In the fixed income space, China has been releasing new investments, such as repurchase and interest rate forwards and swaps, since 2015. The auditing system has also been replaced by a filing system, removing the requirement for issuers to get prior approval and replacing it with a notification process that streamlines issuance. These developments have attracted interest from overseas institutions and increased their exposure to the bond market. In 2017,  the Bloomberg-Barclays Global Aggregate Bond Index and the JPMorgan Government Bond Index-Emerging Markets (GBI-EM) added Chinese bonds to the indices. That same year, the Bond Connect programme was approved, helping to cut down thresholds and costs for foreign investors.

RMB has also experienced a degree of liberalisation. China's central bank has exchanged around $440bn worth of currency with more than 20 countries in the past five years, and as RMB is increasingly used in global trading and settlements, offshore RMB market centres have mushroomed. In 2016, RMB successfully joined the IMF's Special Drawing Rights (SDR) basket, making it more stable and attractive as a reserve asset.

QFII and RQFII allow foreign investors to access the A-share market; for this, qualification approval from the China Securities Regulatory Commission (CSRC) and quota approval from the State Administration of Foreign Exchange (SAFE) are required. After converting foreign currency into RMB, these investors can invest in A-share stocks traded in Chinese exchanges through Chinese domestic brokers. QFII/RQFII is open to institutional investors only; smaller investors can only make cross-border investments through mutual funds or other products issued by professional asset managers and other financial institutions.

Mainland China-Hong Kong Stock Connect allows investors in mainland China and Hong Kong to submit cross-border trade orders to local exchanges through local brokers. The connection between exchanges and clearing houses has removed the administrative qualifications and approvals that institutional investors and brokers were previously subject to.

There are three main ways for foreign investors to invest in Chinese domestic bonds. The first is QFII/RQFII; the process and supervision for bond investment in this system is the same as for equities. The second is China Inter-Bank Market (CIBM) Direct, the only channel through which foreign investors can access China's inter-bank bond market. Here, the bonds stay in China and are subject to administration and regulation.

The third way foreign investors can invest in Chinese domestic bonds is through Bond Conect, which involves three aspects: 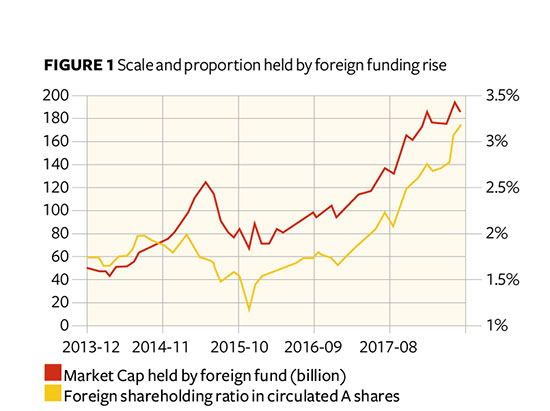 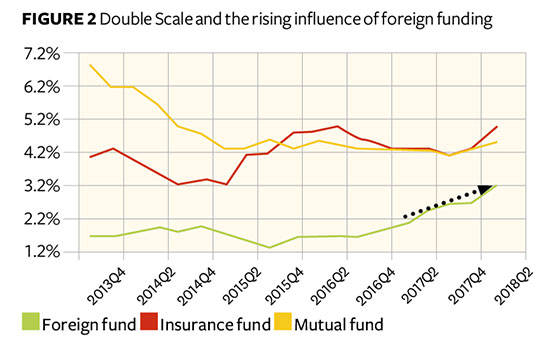 Since March 2016, when the central bank simplified the process of entering the market and cancelled the limitation on investment for certain overseas medium and long-term institutional investors, the inter-bank bond market has been completely open. Bond Connect has not expanded the scope of overseas institutions investing in the inter-bank bond market, but does simplify the process, and further promotes opening up at operational level. With less stringent foreign exchange restrictions and simplified 'one-point access' operations, the initial cost of participating in the market declines, making asset allocation more flexible. The trading mechanism of requesting a quote is more attractive for institutions with less bargaining power.

Prospects for global investors in China

During the past two years, foreign capital has become the largest source of incremental funding for China's A-shares. The value of stocks held by overseas investors reached $187bn, as of the second quarter of 2018. Of this, $99.3bn was held through mainland China-Hong Kong Stock Connect and $87.7bn through QFII/RQFII. This makes up 3.19% of A-shares' floating market cap.

Bond Connect has increased demand for China's bonds from overseas investors. These have increased their holdings of domestic bonds - especially short and medium-term maturities. As the bond market opens further, once government bonds are included in key global bond indices, its position in the global bond market will be further enhanced.

The Chinese bond market has accelerated the process of openness to the outside world since 2010, and in 2016, the central bank further broadened the range limitations of overseas institutional investors and trading instruments in the inter-bank bond market, cancelled investment quota restrictions and simplified investment management procedures. As a result, plenty of overseas investors entered into the mainland bond market at the opening of the Bond Connect in 2017. According to the statistics of the central bank, the total amount of bonds held by overseas institutional and individual investors reached $234bn by the end of the second quarter of 2018. 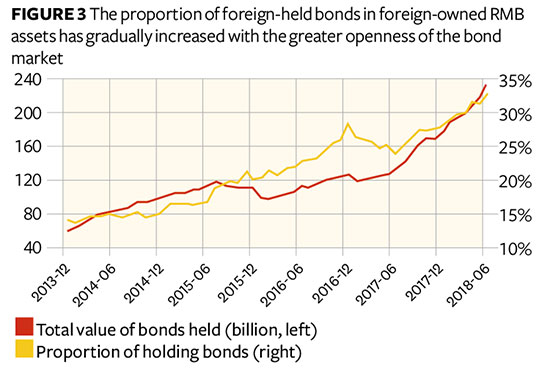 In the short term, inclusion in the MSCI index will result in foreign incremental funding in China's A-shares market. In September 2018, the MSCI inclusion factor was raised to 5%, which brought a new inflow of around $10bn. In the long term, foreign funding is expected to reach trillions of dollars after being fully integrated into the MSCI international index. If the MSCI inclusion factor is gradually increased by 100% from 5% in the future, it is expected that the new inflow will reach $400bn. At the same time, as A-shares are also expected to be gradually included in the FTSE Russell index, the incremental funding from international investors will grow. Based on the internationalisation experience of Taiwan and South Korea markets, incremental growth of foreign investment after a market is fully opened is even broader. Taking the proportion of foreign capital in local equity markets in Japan (30%), Taiwan (25%) and South Korea (16%) as a reference, if the proportion of foreign investors' holding reaches 5%, 10% and 15%, the incremental capital into A-shares will reach around $200bn, $600bn and $1trn, respectively.

Regarding foreign incremental funding in the bond market, the RMB-denominated Chinese government bonds and policy financial bonds are to be included in the Barclays Global Aggregate Index. This will start in April 2019 and is expected to take 20 months. At the end of January 2018, 386 Chinese bonds were included in the Bloomberg Barclays Global Aggregate Index - 5.49% of the index market cap of $53.73trn. Chinese bonds are also likely to be included into the JP Morgan Government Bond Index-Emerging Markets Index and the Citigroup World Government Bond Index.

With their increased openness and numerous options, Chinese markets are increasingly showing themselves to be fertile ground for the foreign investor.

This article appeared in our December 2018 issue of The Actuary.
Click here to view this issue
Filed in
12
Topics
Global