An easier pill to swallow 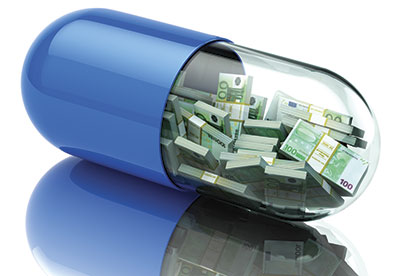 In October 2018, following intense discussions with the German life insurance sector, the German Ministry of Finance published a new method for calculating the additional reserve requirement, the Zinszusatzreserve (ZZR), which will be effective by year-end 2018. The new method follows arguments from several stakeholders - including insurance companies, the German Federal Financial Supervisory Authority, the German Insurance Association (GDV) and the German Actuarial Society - that the previous calculation method forced insurers to build up an excessive amount of reserves in a very short period of time. As a consequence, to finance the ZZR, most German life insurers had to realise a large amount of gains on their fixed-income investments, subsequently losing the income-generating power of those investments. In contrast, the new calculation method is intended to reduce the ZZR allocation for the whole life insurance industry, making ZZR buildup more affordable.

ZZR was first introduced by the German regulator in 2010. The goal was to ensure that German life insurers were able to build additional buffers to meet future commitments to policyholders, stemming from their traditional guaranteed endowment and annuity products. So far, ZZR build-up has exceeded expectations at the time of introduction. The total amount of ZZR reached 60bn in 2017, and the allocation that year was a record high 17bn. To put this into perspective, the German life insurers' shareholders' fund was 16.1bn in total as of year-end 2017, according to the GDV.

The ZZR pre-finances the guarantees provided by German life insurers. As a whole, these have been reducing the average guarantee over time, from 2.89% to 2.0% at the end of 2017. However, the rapidly declining reference yield has led to much higher ZZR requirements than originally expected. Therefore, most German life insurers have had to realise high amounts of valuation reserves on fixed-income assets to finance the ZZR.

The upper and lower boundaries depend on the previous year's reference yield, the underlying yield of the current year, and the so-called 'X-factor' (set to 9%), which defines the width of the corridor. Under the new method, we expect the reference yield per 2018 will be 2.09%, compared with 1.88% under the previous method

The ZZR for individual companies can vary due to the composition of their back books and the reserve practices they have used to date (for example, the inclusion of surrender and cash options, and individual reserve strengthening).

Due to a higher reference yield under the new calculation method, allocation to the ZZR in 2018 will likely only be 6bn-8bn, compared with about 24bn under the old method (see Figure 3). Asset valuation reserves and capital buffers will be better preserved. Moreover, insurers may also be able to retain bond portfolios with large capacity to generate income, which they can maintain in their investment portfolios instead of realising them to preserve higher running investment yields. Simultaneously, the ZZR still supports life insurers' capacity to meet future guaranteed payments to policyholders, while its buildup will be better aligned with the long-term nature of the guaranteed liabilities. 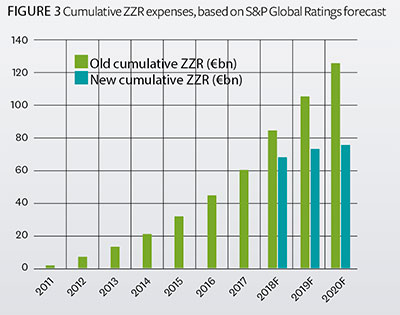 In the stochastic cashflow projections for Solvency II, local GAAP (HGB) requirements also need to be considered, including ZZR financing. This is important because it reduces insurers' own funds and the overall solvency ratio. This is particularly relevant under unfavourable economic scenarios in the Solvency II calculations. In certain cases, this could lead to extraordinary measures, such as capital injections being necessary to finance ZZR. Overall, however, the proposed method reduces the financing needs in the projections, especially in unfavourable economic scenarios such as equity shocks combined with prevailing low yields.

We expect the new method to have a positive effect on solvency ratios in the long term, with some insurers experiencing improvements of over 10% of the solvency ratio (a solvency ratio of 150% might increase to more than 165%). This depends on the back book composition, and also on calibrations within Solvency II calculations.

Silke Longoni is an associate at S&P Global Ratings

This article appeared in our December 2018 issue of The Actuary.
Click here to view this issue
Filed in
12
Topics
Global