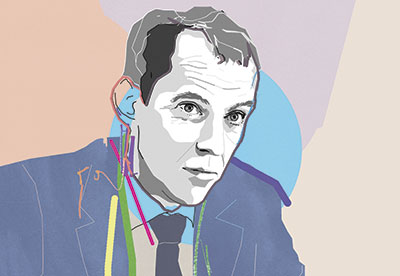 The SONAR (Systematic Observation of Notions Associated with Risk) report is one of the most exciting pieces of research in the insurance and risk management arena.Each year, Swiss Re experts review emerging risks that the industry and society are facing. Following the 2018 edition's publication, I sat down with Dr Patrick Raaflaub, Swiss Re's group CRO, to learn more about this wide-ranging analysis.

The report covers all manner of emerging risks, from microplastics entering the food chain to global geopolitical situations. I began by asking how such a broad report is put together. "All the 10,000-plus employees of Swiss Re have an opportunity to contribute, and many do," says Raaflaub. "What we have is several layers of internal webs and connections, supported by technology that keeps people in a permanent dialogue. At the centre of this we have a small team in risk management called the emerging risk unit, which stimulates the discussions."

Raaflaub stresses that while the report has traditionally focused on new emerging risks, there has been a slight change in focus. "What we have started to do in parallel is monitor, what we call internally, the slow-burning risks. You could also call them the longer-term emerging risks."

With such a wide range of topics covered, it can be hard to know where the real dangers are. Is there one risk that concerns Raaflaub the most? "What I find very intriguing is the human-machine interaction risk, and it comes up in three of the topics mentioned in the report."

The first of these topics is the fact that people are getting less sleep, primarily due to increasingly variable working schedules and longer commutes. High levels of fatigue could cause people to make serious errors, which subsequently may lead to higher property and casualty claims.

A second topic covers increased cost-cutting in the shipping industry, which could lead to higher collision risk. Fatigued crew members could well be a contributing factor to marine incidents.

The third and broader topic is our increased reliance on digital assistance systems. The SONAR report explains that such systems can make us "complacent, obedient and less skilled", leading to much greater systemic operational risks.

For Raaflaub, the risks "feel very different, but the common theme is this trend around the human-machine interface. Is automation making us feel safer than it should? Is it putting us into half-asleep mode, so that when we should react we are not able to do so fast and well enough?"

Cyber risk is currently getting plenty of attention in the reinsurance industry, and it is no surprise to see it mentioned in the report. For example, the WannaCry ransomware attack in 2017 exploited the fact that so many organisations were using an unsupported version of Microsoft Windows operating system.

A widespread mantra in the reinsurance industry is: 'If we can price it, we can cover it'. Does Raaflaub believe cyber risks can be priced that accurately? "I think so," he says."I would add a second condition, though: 'if we can control accumulation, we can write it'. If you add the second condition to the cyber risk, you can already see the limits of cyber insurance."

Raaflaub won't be categorical on cyber risks. "Technological developments require new risk management. Insurance can help create transparency over basic risk management. Also, price creates transparency in the trade-offs between the residual risk and the cost to mitigate risks. I mean this in a very technical sense, not in a mathematical sense. If you think about fire hazards and the push, through insurance rates, for more fire safety improvements, you can imagine a similar process for cyber insurance."

At the same time, he flags some significant challenges: "Some cyber weaknesses are less visible, and not as easy to detect as weaknesses in physical infrastructures. We clearly have an accumulation issue because the networks are interconnected - not just physically, but also through widespread use of similar components of technology globally. This is different from other risk categories, where geographical distance creates diversification benefits."

One surprise to many may be the presence of asbestos exposure in this 'emerging risks' report. Raaflaub admits to initial surprise at finding it is still a topical issue, but goes on to explain that asbestos is highly prevalent in developed economies. "While we are processing the first wave of asbestos cases, which almost broke the back of the insurance industry, we still have asbestos being used." As the report notes, Lloyds was almost brought down in the 1990s because of long-tail asbestos claims. There remains considerable exposure to the substance - 4m metric tonnes were used in 2013 - and some European countries have not banned its use. "We seem to be addicted to this material."

What can we learn from the insurance industry's asbestos issues? "The main lesson we got from asbestos is that having an early warning system is essential," says Raaflaub. "But having a warning system and monitoring is not good enough. As soon as something becomes really threatening, you then also have to act on it. To me, that's probably the main lesson. I don't think we can assume that no other materials or technologies will turn out to be dangerous in the future. For sure, this will happen." He expands on this point: "It makes it that much more critical for the industry to follow these weak signals, to monitor trends and be willing to act as they become a little bit stronger."

One risk that isn't explicitly mentioned in the report is climate change. "I would ask: is climate change really an emerging risk?" Raaflaub counters. "It feels, at least to us, that it emerged a long time ago. If we look at our company or at other industry participants, we raised or identified climate change 30 years ago, so this business is fully emerged. The collective challenge of the century is how to deal with climate change, and it feels that it almost doesn't fit in this report." Some of the impacts of climate change are picked up on, though. "We have highlighted certain aspects that are in some way linked to the overarching theme of climate change, such as the water stress theme that we discussed in the 2017 SONAR report, or the energy demand theme."

Other risks mentioned include the price of ecosystem services; resource stress - including lack of clean water - which drives up production costs; and the loss of mangrove forests, which drives up hurricane losses as the forests provide a natural coastal defence against hurricanes.

Ecological legal frameworks are becoming more widespread. This is a good thing, but it could cause unexpected losses if insurers don't pay enough attention. So what concrete measures is Swiss Re taking in the face of climate change issues? Raaflaub lists a number of key operations: "Advancing sustainable energy solutions is a key area for the business, and we are at the forefront of supporting new types of technologies - for example solar, wind, geothermal, small-scale hydroelectric and biomass operations.

"In addition, we have taken proactive steps to limit our support for thermal coal on both the investment and underwriting side. However, I think it would be unrealistic to expect the insurance industry to be capable of dealing with these challenges alone."

Coming to the end of the interview, I want to get Raaflaub's views on wider industry themes - in particular, how he sees the impact of new emerging insurance channels, often bundled under the name 'insurtech'. "I think of insurtech as more of an opportunity than a threat," he says. "There are new possibilities that significantly improve the insurance value chain of our own business."

Where does he feel that the impact of insurtech is most likely to be felt within the industry? "The technology can obviously be used in claims management or claims adjustment, but it also improves the risk profile through more intense, more connected and cheaper monitoring," says Raaflaub. "This facilitates the better management of risks and helps avoid incidents - so I think for the industry overall, it's an opportunity. I welcome change through technological development. It's almost a bit of a Darwinian process, but overall it is positive for society's progress.

"The industry should embrace the technological opportunities offered by insurtech and try to integrate them into processes and product delivery."

This article appeared in our November 2018 issue of The Actuary.
Click here to view this issue
Filed in
11
Also filed in
Interviews
Topics
Risk & ERM