David Dror on the new methods that are shaking up insurance in low and middle-income developing countries. 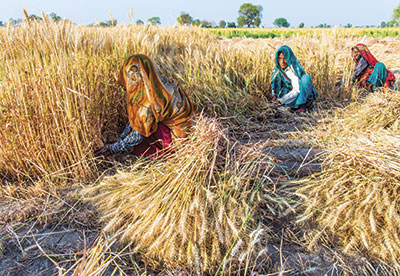 More than half of the world's population - at least 3.3bn people - live in rural areas, and agriculture is the livelihood for an estimated 86% of them. Crop insurance exists in one form or another in 104 countries, and is big business in the US, Canada, the EU, New Zealand, China and India. However, penetration is particularly low, or non-existent, in many low and middle-income developing countries (LMIC) with high reliance on agriculture for the population's livelihood. This protection gap reflects fundamental differences across countries in terms of land ownership, machinery, buildings and trees, as well as access to capital, information and policymakers. In LMIC, most decisions regarding crops are in the hands of smallholder and tenant farmers, or in traditional collective tillage habits (such as the Senegalese carré). These differences have considerable ramifications for risk management practices, or indeed for understanding the value proposition of a complex instrument such as crop insurance.

Crop insurance can be characterised by what is covered and how the coverage is implemented. It can cover certain input costs, yield (called crop-yield insurance) or farmers' revenues (crop-revenue insurance), and coverage can be against named or multiple perils. Under crop-yield insurance, the insurer pays indemnity when the actual yield is lower than expected for the estimated effect of one of the specified weather risks, or because the climatic conditions are hospitable for pests. Crop revenue insurance, also known as crop revenue coverage (CRC), protects farmers' revenue whenever low prices, low yields or a combination of both cause revenues from an insurable crop to fall below a guaranteed level. CRC exists in the US but not in LMIC.

The two most common ways to insure crop risks are traditional indemnity-based and new index-based insurance. The first entails paying farmers an indemnity to restore a portion of an actual loss. It requires considerable effort in individual loss assessment and is exposed to moral hazard and adverse selection. Insurers encounter difficulties in pricing the product and assessing the losses, while farmers encounter difficulties obtaining indemnity payouts. Some analysts have concluded that it is unsustainable, and it is now almost a thing of the past for the market segment of smallholder farmers.

Index-based insurance (also called parametric insurance) is based on the notion that payouts are due when the value of an index reaches a certain threshold. There are two types of index: 'direct' and 'indirect'. In direct index insurance, the benchmark is defined as the average yield of a reference area. Payment is due when the actual yield is below that of the benchmark in that area. The main challenge is to establish the value of average yield and the relevant reference unit (village, block or larger?). The actual loss of the reference area is frequently assessed from a sample of insured areas, performing crop-cutting experiments. This method is often criticised for its cost and exposure to inadvertent or deliberate errors. Indirect index insurance relies on comparing the current condition of a given parameter (for example, rainfall, temperature or vegetation indices) to the long-term averages.

The main advantage of index-based insurance is that it avoids the problems of moral hazard and adverse selection that are inherent in indemnity-based insurance, and it simplifies loss assessment. There are issues around the quality, objectivity and transparency of the data needed for index insurance. Quality means investing in data systems for reliable indices, which may vary from low-tech weather stations to high-tech remote-sensing satellite images. Objectivity means that no party (insured, insurers, reinsurers or governments) can influence the index measurement. Transparency means that the data and methodology used for constructing and measuring the index are reliable and not hidden from stakeholders.

One of the leading experts in this field, Daniel Clarke, recognised that index insurance is still a "work in progress" when explaining the low uptake. Low demand is due to the mismatch between what happens to farmers and what the insurer pays, as well as high prices, low trust and risk aversion.

In both forms of index insurance, there is a risk of mismatch between losses and payouts (called 'basis risk'). There are two possible abnormalities: farmers are compensated even though they did not incur losses or farmers are not compensated even though they did incur losses. A better application of crop insurance would require two corrections: an index that would justify compensation of losses not yet captured by the less accurate index, and the elimination of compensation that is not warranted by the index.

Currently, the crop index insurance models have been structured around one or two weather parameters only (for example rainfall or temperature), while the correct model of farmers' risk should include other relevant production risks. For instance, rainfall before crop season influences crop yield, but is ignored, as is the cost of irrigation to compensate for insufficient timely precipitation, and non-climatic parameters - even though the standard for impact assessment studies, hydrological studies and vulnerability mappings is to consider both climatic and non-climatic parameters.

The authors of the modified index (called climate cost of cultivation, or CCC) examined its efficiency by comparing it to typical index insurance (TII), and both indices to wheat yield data in the Indian state of Bihar (in years 2000-01 to 2012-13). The correlation of CCC index payouts with actual yield losses was improved by a factor of ~3.9 over TII results (76%, compared with 19.6%). The pure risk premium of the CCC index was lower by around 90% than the premium of the TII. The results have shown that its application could deliver huge improvements in the correlation of losses and payouts and reduce the premium by about 90% of what it is currently.

This leaves concern about farmers' trust. The links between farmers and peers in the community are powerful and can be mobilised to enhance a customer-centric business process of insurance. Pilots of community-based insurance have been successful when insurance was administered at community level, with a well-defined role for the community in enrolling farmers into crop insurance, assisting in claims settlement, representing farmers vis-à-vis insurance companies on claims payments, and resolving disputes at the group level. Farmers joined crop insurance even though premiums were not subsidised, women and tenant farmers could get insurance (when the community vouched for their bona fide status), claims ratios were modest and renewals were high. These results reflected farmers' comfort with the fair enforcement of the insurance contract. The most important advantage of the community-based insurance model was that it bundled several classes of risk (such as health, crop and livestock) under one platform, and provided added-value services for insured farmers.

The CCC index's third novelty has been to develop the methodology to apply the 'polluter pays' principle, whereby producers of carbon emissions in developed countries should pay for the effects of pollution in developing countries. The underlying logic is the debate at many international forums on climate change - farmers (who are not the polluters) should not have to pay for the cost of climate change. Aside from political interests, this principle was not applied because there was no method to identify this cost and isolate it from the calculation of index insurance premiums.

Now, a method has been developed that can be applied to every season, region and crop by calibrating the data. Application would immediately and significantly reduce the cost of the crop insurance to farmers and improve the accuracy of the calculation of the index insurance. Incidentally, the cost of implementing this solution would be significantly cheaper than the the subsidies that governments have paid in recent years for crop insurance premiums.

Governments are surely indispensable when it comes to regulation and supervision, and in reducing the climate change cost component from premiums. However, it is legitimate to question the role of governments in driving crop insurance, considering the low voluntary uptake of crop insurance by farmers in some countries as private insurers retain huge profits, which originate in public funds used to subsidise crop insurance premiums.

The insurance industry, guided by actuaries, can contribute to improving index-based crop insurance for smallholder farmers in developing countries by helping resolve systemic issues, such as making it easier for smallholder farmers to obtain coverage, or by implementing better indexes such as the CCC method. The voice of actuaries needs to be heard on an issue that is driven probably more by information than by land ownership.

This article appeared in our November 2018 issue of The Actuary.
Click here to view this issue
Filed in
11
Topics
Environment