Longevity: moving into the slow lane 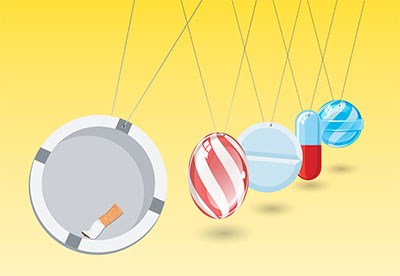 Most of us are familiar with Newton's laws of motion, if not from school-day memories, then from everyday life. One is that, essentially, things change only if something causes them to change.

In the case of longevity, the material longevity improvements of the 1980s, 1990s and 2000s in the UK had specific causes. These are primarily: a massive reduction in smoking; an explosion in NHS funding, with real-terms health expenditure up by a factor of eight from 1951 to 2011; and a revolution in cardiovascular medicine, with the development of now taken-for-granted techniques such as angioplasty and keyhole surgery - as well as the introduction of pharmaceuticals that proved effective in secondary care. Following these improvements, the vital, Newtonian question that now applies is: will we see any such drivers for mortality change in the future?

First of all, will any of these recent causes of improvement continue? If we look at the changes in smoking rates, the reductions in the 65-plus age range have been slight in recent years, with people of that age apparently now set in their habits. Turning to the state of funding for the NHS and social care, this has recently been disastrous in real, per-capita terms. What counts for pensioners is the expenditure per over-65 person - and current demographics, through a combination of migration and ageing, are beating the NHS budget. This is before factoring in medical cost inflation in excess of standard inflation - or the 'diminishing returns' aspect of medical expenditure, whereby each extra 'senior' year of life lived costs considerably more than the previous year of age. This means that the rate of increase in longevity could slow down even as more money is invested per capita in healthcare

The estimated effect of age on the cost to the NHS of providing healthcare can be seen in a graph produced by the Office for Budget Responsibility as part of its Fiscal Sustainability Report (January 2017) (see Figure 1). 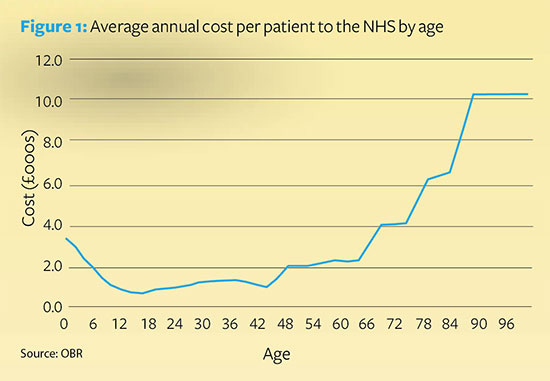 Finally, large-scale medical breakthroughs have slowed down - it has been many years since a large-scale medical innovation was rolled out with a material effect across the population, in the way that we saw with cardiovascular breakthroughs. What do we have on the cards now? Are there other drivers for mortality change? Well, yes, but they seem to be generally negative - drivers of higher mortality, not drivers of higher longevity.

One of the primary 'bad drivers' is related to diabetes (note that similar observations could be made regarding obesity). Diabetes is a chronic condition that, unless managed carefully, can have significant impacts on the long-term health of sufferers, and a consequent negative impact on their mortality risk.

Incidence rates of diabetes are at a historical high owing to a combination of adiposity and high-sugar diets. During the period 1994-2016, diagnosed diabetes in the UK increased by a factor of 2.6 for men and 3.3 for women. Given that diabetes is largely 'the cause of the cause of death' - it is a driver of heart disease and cancer in particular, which is why diabetics in older age groups have a mortality rate of around double that of non-diabetics in that age group - this build-up over the past 20 or so years will start to become more and more evident in the mortality statistics of the future. Projections indicate that the proportion of the population with diabetes will continue to increase during the next 15-20 years.

As diabetes prevalence typically increases with age well into retirement, we can expect to see an increasing proportion of pensioner populations suffering from diabetes in the medium-to-long-term future. In the absence of a significant and affordable breakthrough in diabetes care, this trend will result in a significant downward pressure on mortality improvement rates for individuals of pension age.

Neurological diseases are also showing a worrying upward trend in terms of both incidence and total number of deaths, with the number of deaths having more than doubled during the past 10 years. Figure 2 shows this clearly for men, in contrast to the gradual reduction in cancer mortality and material reductions in cardiovascular mortality.

This trend seems likely to continue, given the lack of successful research so far into the causes of Alzheimer's, Parkinson's and dementia, and the link that is now thought to exist between Alzheimer's and diabetes. 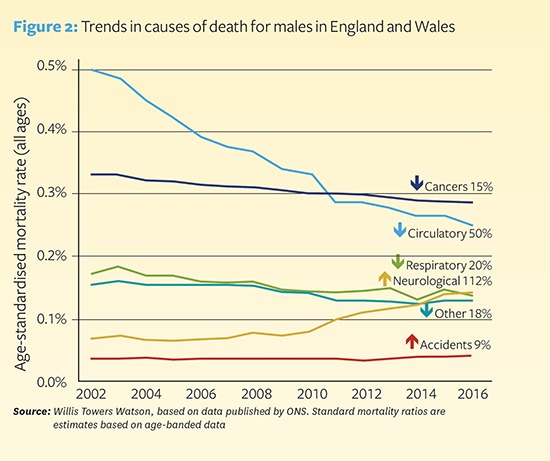 Cancer is the second biggest cause of death in the UK, and the second biggest cause of death worldwide. One of the great questions of the moment is whether cancer mortality is set to experience a reduction similar to that seen in cardiovascular mortality during the past 20-30 years. As Figure 2 shows, progress so far has been tangible but slight, averaging around 1% a year.

Although cancer is a leading cause of death, progress in curing the disease seems slight, given the resources invested during the past 50 or so years - for example, in the US, about $16bn is spent on cancer research annually. A recent article in The Lancet stated bluntly: "Current strategies to control cancer are demonstrably not working. Already one of the world's leading causes of death, the annual death toll from cancer has risen by almost 40% since 1990 and this rate of increase is set to continue." In the past five to 10 years, hopes in improving cancer mortality have ridden on three main strands: immunotherapy, genetic targeting and 'blasting' techniques.

Immunotherapy is expensive and there is unlikely to be much downward movement in price, putting pressure on NHS budgets. Genetic targeting has shown relatively small effects on survival times - months, rather than years - and, by definition, some of the more effective treatments will apply to only small subsets of cancer cases.

The third approach - 'blasting' - is now coming to fruition with the development of proton beam therapy. The UK is currently developing two proton beam therapy centres, costing hundreds of millions of pounds to build, and treatment costs are correspondingly high. However, The Royal College of Radiologists has said that when the centres are fully operational in 2020, PBT will only benefit "a relatively small proportion of patients requiring radiotherapy".

Consequently, while headlines proclaiming a cancer treatment revolution have appeared in the news for years, none of these 'workstreams' gives great hope - especially given the upward pressure on cancer incidence from obesity and diabetes.

Polypharmacy - literally, 'many pills' - is thought to be responsible for a staggering 75% increase in emergency hospital admissions for adverse drug reactions in recent years. It can also be fatal.

The rise of polypharmacy can be linked to the introduction of the Quality and Outcomes Framework (QOF) by the NHS in 2004, the largest health-related pay-for-performance scheme in the world. This scheme introduced a precise 'algorithmic' remuneration system for GPs, for instance linking payment to the proportion of patients above a particular NICE risk threshold who are prescribed statins.

Since then, there has also been a progressive lowering of thresholds designed to trigger prescriptions under the QOF. For instance, around 60% of people who are now labelled as having hypertension would not have been labelled as such under previous categorisation. The extension of treatment to such lower-risk cases, however, means there is much less 'bang for the buck' in terms of lowering mortality rates - and possibly no bang at all. A 2012 review of several clinical trials comparing the merits of antihypertensive drugs with no treatment concluded: "compared to placebo, treatment with antihypertensive drugs does not reduce any outcome... it reduces neither stroke nor heart disease nor total mortality."

Statins proliferated at the same time, also due to QOF incentivisation and threshold lowering. While demonstrably powerful in a secondary care context, the advantages are slight for most in a primary care context - and the iatrogenic (illness caused by medical treatment) potential is enormous. Dr James Le Fanu notes in his recent book on this subject: "It would be a miracle if interfering with the synthesis of a biological compound as important as cholesterol did not have adverse effects in a substantial proportion of those taking statins."

For the very elderly - the age range that is key to the way mortality statistics have been moving recently - the problem is exacerbated by the large number of different medications they are likely to be taking. Each of these has generally been trialled in isolation, but is then prescribed on top of a cocktail of other drugs. Between 1995 and 2010, the proportion of adults who were dispensed more than five drugs doubled to 20%, and the proportion who were dispensed more than 10 tripled to 6%. These cases will generally be concentrated in the elderly.

A 2016 government-sponsored review of progress made under the QOF - which originally aimed to save 30,000 lives each year - was salutary. It stated: "The introduction of the QOF was not associated with significant changes in mortality for the diseases targeted by the programme We have found no definitive evidence that QOF has had any beneficial effect on emergency admissions or population health."

On the other hand, the QOF has been associated with a steadily rising number of adverse drug reaction cases and associated deaths, and the opportunity cost of its implementation - around £15bn in the past 15 years on QOF-related increased payments to GPs, and a similar amount for the polypharmacy generated. There has been a doubling or more of prescriptions for statins, blood pressure-lowering medication and diabetes drugs. This particular problem seems to have been overlooked in all the mortality commentary of recent years.

If we look at the causes of change, whether positive or negative, it is hard to conclude anything but a medium-term horizon, with mortality improvements struggling to rise above zero. This 'U-turn' situation for pensioners is mirrored at younger ages: a recent Health Foundation report stated that millennials will be the first generation to have worse health problems than their parents when they reach middle age.

Matthew Edwards is a consulting actuary at Willis Towers Watson

This article appeared in our October 2018 issue of The Actuary.
Click here to view this issue
Filed in:
10
Topics:
Health care