Routes to the Top

In the third instalment of our Routes to the Top series, more senior executives speak with Bradley Shearer about the paths their careers have taken, and offer advice on how to progress in our own professional lives. 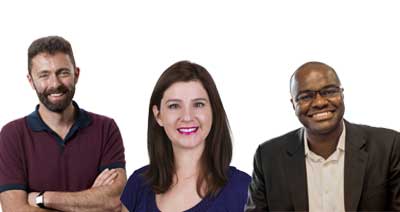 This month, we conclude our set of 10 vignettes with insights from some general insurance, insurtech and startup actuarial leaders. These build on our August article that showcased the experiences of three life and health leaders across insurance and reinsurance. We hope their pioneering stories inspire you to consider what you want from your own career, reflect on your personal strengths and achievements, and define areas where ongoing learning could help you to develop further.

CEO of Bought By Many

Looking back on his career so far, Steven Mendel recognises the transitions he's made since beginning as a pensions and investment consultant. When Steven considered an MBA, he was advised that it was better to get first-hand experience, so he joined McKinsey's retail financial services area, which helped hone his skills in simplifying complex problems.

His first corporate non-consulting role was at Barclays Wealth. He then started an art finance and wealth advice business for Christie's, the auction house, where he saw the credit crunch's impact on high-net worth individuals. He also launched a non-advised offering for Close Brothers.

In 2012, before 'insurtech' was a term, Steven started Bought By Many, which began applying collaborative buying to the insurance market. It has now launched pet insurance and travel insurance products. Being the CEO of a successful startup is "incredibly varied and very stimulating", and Steven notes that he is "highly effective when super busy". He feels an important part of his role is "job creation and satisfaction" and is delighted that Bought By Many is continuing to expand.

His guiding philosophies are "do now, ask later" and "try it - what's the worst that can go wrong?"; he suggests structuring our lives so we have freedom to make decisions knowing they could fail. He's a strong believer in "showing, not saying" and reads customer feedback "almost obsessively".Steven highlights the fact that communication is a crucial skill for actuaries: "Being an actuary opens doors - it gives you permission and authority to talk about insurance and adds credibility to our business."

Steven ended our discussion with a professional challenge: "Could we as actuaries have an even more positive impact by being firmer in our views, and confidently shouting out as individuals when we see an injustice?"

MD of insurance at Buzzvault

Charlotte Halkett's choice to study for a Masters in natural sciences at Cambridge points to her interest in hazards and risks, including earthquakes. After a pensions consulting role, she moved to non-life consulting at EMB, attracted by the variety. There she worked with Michael Brockman (the 'B' in EMB), and in 2010 she joined him at InsuretheBox, which became another UK insurtech success story within the telematics (motor) market.

Last year, Charlotte shifted across to another startup as MD of Buzzvault (part of Buzzmove), applying technological innovation to the home insurance market in order to remove pain points for customers. She looks after the 'front office', including distribution, marketing, product and pricing.

She reflects that consulting taught her to find practical solutions quickly and exposed her to different ways of solving problems - giving her the confidence to compete in the market directly. Charlotte sees her work as "a vocation", and wants to make a positive difference to society - whether saving lives through telematics or covering perils via home insurance.  She loves working in innovative environments where the team is searching for better ways to do things. Her belief in the value of insurance shines through strongly, and she's previously described it as a "noble business".

Those familiar with insurtech will know that Charlotte's personal brand is high profile, both on social media and at the many conferences she attends and presents at. For her, this "comes from authenticity and a belief in what I'm doing". She also credits her listening skills (to really understand what the underlying issue is), empathy and emotional intelligence with helping her get where she is today.

Charlotte feels an actuarial background trains us how to think and look for evidence, including where customer behaviour is changing. She admires the diligence and supportive nature of actuaries generally, and the profession's search for excellence.

Abu Addae describes himself as "always drawn to finance and mathematics", which influenced his choice to focus on quantitative finance as part of his degree at the University of Cape Town. He did his Masters in financial mathematics "mostly for curiosity" - but it has turned out to be instrumental to his career.

He attributes his early career success to his combination of actuarial science and financial mathematics skills (unique at the time) and t0 Old Mutual South Africa's culture, which allowed him to take on a lot of responsibility in applying those skills to managing risks.

"The rest of my career was a series of cascades, because I got great experience solving hard problems. I was asked to take on more problems, which then gave me even more experience, and so on. I had some great mentors to help me with the parts that were particularly difficult, like learning to manage a team". His corporate roles culminated in him joining the executive committee as head of balance sheet management.

His decision to leave that environment and start a business "had been long coming". Growing up, Abu had watched his father, an engineer, start a lot of businesses, and "one of the best things was that he involved us in them". These experiences got Abu interested in finance and business as a career, and "planted the idea that one day I had to have the experience of starting a business from scratch". He's done just that in co-founding Lifecheq, a financial advisory business, and enjoys contributing to economic development on the African continent: "a very big part of my 'why' with every career move".

Our final words of career advice from Abu:

Resonant themes across this series have included:

Bradley Shearer is an actuary and executive director of Protagion, offering career management for qualified professionals. He will be speaking at the IFoA's CPD Co-ordinators' Briefing "Lifelong Learning - fit for the future" on 1 November.

This article appeared in our September 2018 issue of The Actuary.
Click here to view this issue
Filed in:
09
Also filed in:
Interviews
Topics:
Health care
Professional