How many sides to your triangle? The Civil Liability Bill underwent its third reading in the House of Lords in June, and so is almost halfway towards becoming law. As well as fundamental whiplash reforms, the bill includes a new framework for setting the Ogden discount rate (ODR) - the rate used to discount expected future cash flows for injury lump sum settlements.

The main features of the framework are:

Whatever the outcome of the Civil Liability Bill, actuaries working in injury class insurance must develop a methodology to deal with a more complex variable Ogden framework. This article considers some of the uncertainties raised by a variable Ogden framework and discusses possible methodology adjustments available to actuaries working across pricing, reserving, capital and reinsurance.

Pricing methodology with variable Ogden rates requires a long-term view. Catastrophic motor injury claims are most sensitive to Ogden, as claimants are more likely to require care further into the future. These claims are often long and complex, as claimant experts must look past the initial injury to assess the long-term extent of the damage.

During the past five years, motor injury settlements of £1m and above took, on average, six years to settle. Of these, 10% took between 10 and 16 years to reach settlement.

It is important to take settlement time into account because it is the future ODR at point of settlement that determines the settlement value of a claim, rather than the ODR that is in force when the policy is written.

The Civil Liability Bill proposes that the ODR be reviewed at least every three years. For a catastrophic injury reported today, this would be enough time for the Civil Liability Bill not only to come into force, but also to potentially have been through two, three or even four of the bill's proposed three-year reviews. Claims departments supported this by upgrading systems and expanding reserving processes to hold claims triangles on multiple discount rates. As well as the booked triangle that relates to the variable in-force ODR, many insurers now also hold triangles for a range of potential future ODRs - for example, at -0.75%, 0%, 0.5%, 1% and the historical 2.5%.

Multiple claims triangles give reserving actuaries a link to the historically stable 2.5% pattern. This almost enables traditional reserving methods to be used again. However, for this method to work, it is necessary to also know what the claim would have settled at on a 2.5% ODR.

Settlement tracking provides a neat, if subjective, solution to creating a complete 'as-if 2.5% ODR' claims triangle. Tracking the negotiation process and contrasting it to past settlements at a 2.5% ODR gives an early indication of tail runoff that will otherwise take years to flow through naturally.

Figure 2 (below) illustrates this methodology in the familiar development pattern context: Holding multiple ODR claims triangles enables the maximum patterns above to be calculated - that is, the white line and the upper blue line. However, effective settlement tracking will be needed if insurers want to demonstrate greater settlement redundancy and realise reserve releases and cheaper reinsurance prices sooner.

The two most common forms of settlement tracking to date have been:

Monitoring the settlement negotiation process can justify greater incurred but not reported runoff assumptions, giving a significant lift to prior year results.

It also has the potential to reduce capital requirements and enables a more aggressive pricing stance. 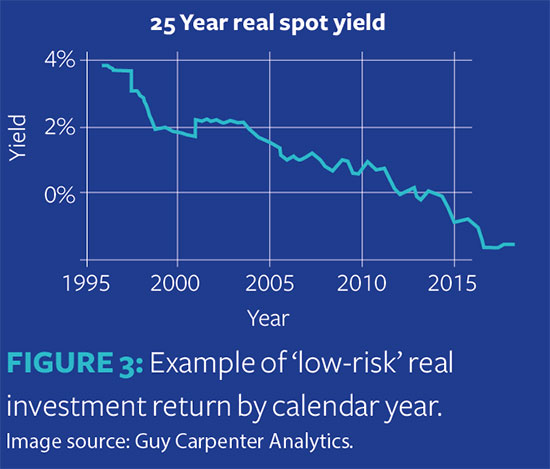 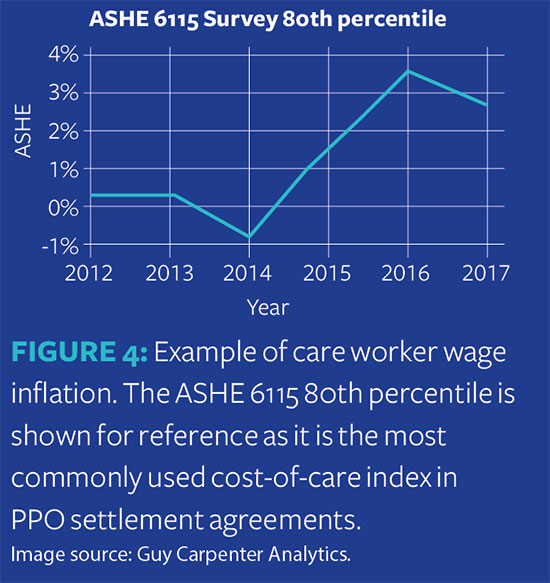 From a claimant perspective, PPOs have been ideal settlement options because they remove two significant claimant risks relating to lump sum settlements from a cost-of-care perspective:

1. Mortality - living longer than expected and running out of money to pay for care

2. Investment - real investment return being less than the ODR used in the lump sum settlement calculation and running out of money to pay for care.

Investment risk increased significantly after the Ogden rate was first set in 1996. Interest rates have fallen steadily, with inflationary increases to the cost of care in more recent years contributing to this.

Following the ODR move to -0.75%, the propensity for claims to settle as  PPOs fell significantly. This was because ODR at -0.75% made claimants' alternative option to settle as a lump sum more attractive.

There is a complex interplay between the Ogden discount rate, PPO propensity and the future macro-economic environment.

Actuaries modelling in a variable Ogden framework need to be cognisant of this interplay as well as the distortions created by changes to personal injury settlement processes. This article appeared in our September 2018 issue of The Actuary.
Click here to view this issue
Filed in:
09
Topics:
General Insurance