Foundations for growth in Asia 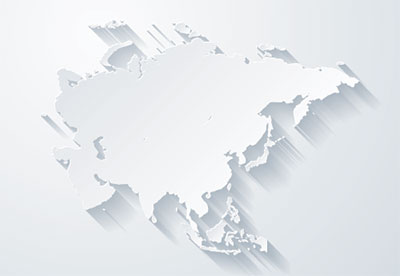 Infrastructure investment is generally considered a natural match for insurers' and pension funds' long-term liabilities, because of its long-term predictable cash flows, economic links with inflation, and low correlation with other asset classes. However, recent strong demand for infrastructure in developed economies has pushed valuations up, squeezing returns. Spreads for long-duration infrastructure debt have now fallen to 1.5-2%, from an average of 2% in 2013 and 2.5-3% after the financial crisis, according to Schroders. Expected returns in unlisted infrastructure equity have also declined, from double-digit levels to 6-8%.

It is not surprising, then, that the untapped Asian infrastructure market is now attracting interest from investors. Asia, with its rapid economic growth,  needs substantial additional infrastructure investment, which cannot be achieved by the public sector alone. The Asian Development Bank estimates that the region needs to invest US$1.5trn (£1.2trn) a year on infrastructure between 2016 and 2030. Given limited government budgets in this region, it is anticipated that 60% of the investment gap will have to be covered by the private sector - an immense opportunity for yield-hungry insurance companies and pension funds.

Infrastructure companies in Asia are among the largest corporate bond issuers in the domestic bond market. They are often state-owned or have a close relationship with the government, enhancing the credit risk perception of investors and credit rating agencies.

The Asian infrastructure bond market is different from the European: it is smaller and has a narrower range of credit ratings. Between 2003 and 2015, the size of the European bond market was 11.7% of GDP on average, while the Asian one was 6.8% of GDP. Credit rating was more evenly distributed from AAA to BBB ratings in Europe, whereas in Asia, issuance was mainly rated A, AA or  unrated, according to Moody's.

Then there is project finance, a special type of debt with repayment backed by cashflows generated by specific infrastructure projects. Given Asia's heavy reliance on bank loans for infrastructure funding, project loans constitute a higher share of project finance than project bonds in this region. Between 2006 and 2015, project loans comprised about 95% of project finance debt issuance in Asia Pacific, versus 80% globally. According to Moody's, between 1995 and 2005, the cumulative default rate of project finance bank loans in emerging markets (which includes substantial parts of Asia) was 8.3%. This level is comparable to crossover, Baa3/Ba1-rated corporates. The loans' average recovery rate was almost 80%, comparable to that of senior secured corporate bank loans.

Sukuk or Islamic bonds, which follow Shariah principles, are popular in ASEAN and the Middle East. Sukuk structures are suitable for project finance, because the risk-sharing and asset-based characteristics of this type of debt sit well within Shariah principles. Sukuk bonds have been extensively used for infrastructure financing in Malaysia, especially in the energy and transport sector.

In the listed equities space, the market is generally represented by indexes such as S&P Asia Infrastructure Index and Dow Jones Brookfield Asia Pacific Infrastructure Index. High liquidity, yield and high risk-adjusted returns enhance the profile of the asset class.  However, these products provide limited diversification because of their high correlation with the broader market. The table below shows the key characteristics between Asia infrastructure equity and the global equity indices.

Exposure to infrastructure as an asset class can also be achieved through specialist Asia-listed closed or open-ended funds. Open-ended infrastructure equity mutual funds are particularly prominent in India. 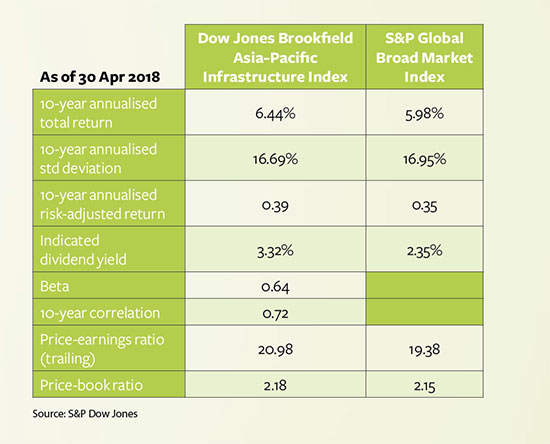 The risks and challenges differ among countries, reflecting the region's diverse demographic, economic and political environment.

Lack of participation in Asia infrastructure can be attributed to unfavourable regulatory treatment.  While the Solvency II Directive has reduced the capital charges for qualifying infrastructure investments, this only applies to investments in EEA and OECD countries - most of Asia is left behind. In an effort to curb currency speculation, several Asian countries impose capital control on overseas investors. Many countries apply 'real demand principle', requiring foreign exchange transactions in the onshore market to link to a qualifying underlying asset. This creates further complexity and higher costs, which drives foreign investors to hedge in the offshore foreign exchange market instead.

Weak public-private partnership frameworks (PPP) in many Asian countries may also deter foreign investor participation. According to Infrascope, only Korea, Japan, India and Philippines, out of 17 Asia-Pacific countries assessed, were rated as having 'developed' PPP markets. While the report acknowledged that significant progress has been made in the majority of the assessed countries since its 2011 assessment, further work needs to be done to boost PPP frameworks.

Many Asian countries lack sophisticated, deep and liquid financial markets to attract foreign investors. There is room for improvement in the trading, clearing and settlement systems, as well as in foreign currency and interest rate hedging. To address this, some investors may prefer investing in vehicles with the desired Asian exposure but domiciled in countries with developed capital markets.

Dalila Atiqah Hashim is an actuary at Malaysian Re.

This article appeared in our September 2018 issue of The Actuary.
Click here to view this issue
Filed in:
09
Topics:
Global