Statins: figures on the pulse 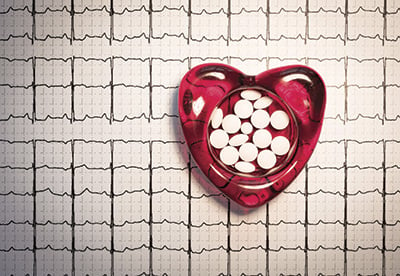 Medical advances are the major drivers in the longevity increase. But how to quantify this relationship? Our research, funded by the Actuarial Research Centre (ARC), uses The Health Improvement Network (THIN) primary care data to develop statistical models of longevity, given a particular chronic medical condition or intervention.

In his article in The Actuary in August 2017, Jon Palin (on behalf of the Continuous Mortality Investigation - CMI) stated that: "From 1968-2010, 70% of all mortality improvements can be attributed to the fall in deaths from circulatory diseases...

The period 2011-16 saw much lower mortality improvements in circulatory diseases." What were the drivers of this rapid improvement and the consequent decline in improvement rates? Here, we show that the developments in longevity since 1987 are mainly due to statins, a cholesterol-lowering class of drugs prescribed to prevent cardiovascular disease (CVD).

The advantage of building a model using individual- level medical data is that it is possible to model both the uptake of medical treatment and the effect of that treatment on longevity, based on the individual profile instead of the aggregated profile.

Our research suggests national life expectancy has increased by two years because of statin use, and that there is the possibility of increasing expectancy by a further year through statins alone.

It is well established that statin therapy for primary prevention of CVD improves life expectancy. In 2014, the National Institute for Health and Clinical Excellence - a UK national body that provides guidelines on prescription of drugs - widened the eligibility criteria for statin therapy, resulting in an additional 4.5 million UK residents being eligible for the therapy. The impact of statin prescription on national life expectancy, and on mortality projections of populations covered by insurance and pension schemes, is unknown.

To make an accurate estimation, we needed to know the effect of statin prescription on longevity for different ages and cardiac risks, where the cut-off points of cardiac risks were informed by the changing guidelines on primary prevention of CVD. Combining these effects on longevity with the data on the uptake of statins, we can calculate hypothetical changes in national life expectancy.

Statins have been publicly available since 1987 and started to become popular around the year 2000. NICE's recommendations on statin therapy changed in 2006 to include patients with the prediction algorithm QRISK2 above 20% (from above 40% previously), and in 2007, statins became a first-line treatment for CVD survivors. At the end of the study period in 2011, statins were prescribed to 20% of patients with a QRISK2 below 20%, 45% of patients with a QRISK2 above 20%, and in 90% of CVD patients. The new NICE guidelines (2014) extended statin therapy to QRISK2 over 10%.

Effects of statins on longevity

In our previous work we selected four age cohorts of patients from THIN who were born between 1920 and 1940, resident in England and Wales and turned the baseline age in 1987-2011. We chose baseline ages of 60, 65, 70, and 75 because these are key in retirement planning and in statin initiation for primary prevention of CVD. Each cohort included 115,000-250,000 patients with no history of CVD and consisted of 52%-58% women.

At the cohort's age, a snapshot of the patient's medical history was obtained, and their survival was subsequently recorded. Cardiac risk was estimated using NICE's recommended tool, which provides the 10-year risk of a first cardiovascular event (QRISK2-2015 - www.qrisk.org). Sub-groups were then combined by age and cardiac risk. 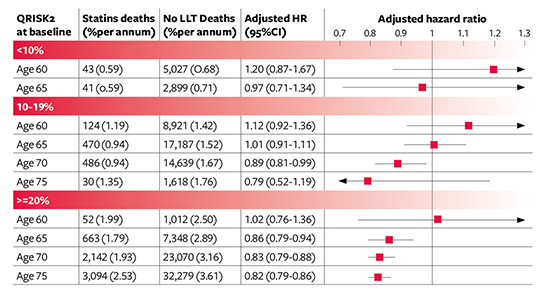 Changes in life expectancy due to statins

Using the statin prescription rate and the Office for National Statistics' life tables of England and Wales for the period 2009-11, we can estimate the number of years of life expectancy lost or gained in effective age, associated with statin prescription.

The longevity improvement associated with statin prescription translates to a decrease in effective age of up to two years. Applying the results to the 2009-11 life table of England and Wales, life expectancy for women aged 70 or 75 would increase by 0.7 or 1.0 years, respectively, if all eligible women under the current guidelines were prescribed statins.

The reason for a greater increase at age 75 was because the statin prescription rate for primary prevention of CVD was lower at that age. Therefore, life expectancy gains from widespread statin prescription are significant. Similarly, for men aged 70 or 75 it would increase by 0.8 years.

We also attempted to quantify the contribution of statins to longevity since they were introduced in 1987. Through 2010, we estimate that statins were 74% responsible for increased life expectancy at the age of 70 (the total increase being 2.7 years for women and 3.7 for men) and 57% responsible for the increase at age 75 (2.2 and 2.8 years, respectively).

For an individual, estimated longevity improvement due to statins translated to a decrease in effective age by up to two years. National life expectancy estimates factor this in, owing to the 90% prescription rate of statins to CVD survivors. Our results are consistent with the conclusions from the CMI. However, life expectancy could further increase by up to one year if all eligible people under the current guidelines were prescribed statins. It should be noted that effectiveness would be further limited by compliance, as not all patients decide to take statins, and about half of those who start discontinue the treatment.

Professor Elena Kulinskaya is Aviva chair in statistics at the School of Computing Sciences, University of East Anglia

Dr Lisanne Gitsels is a postdoctoral researcher in statistics, based at the School of Computing Sciences at the University of East Anglia

This article appeared in our August 2018 issue of The Actuary.
Click here to view this issue
Filed in:
08
Topics:
Health care