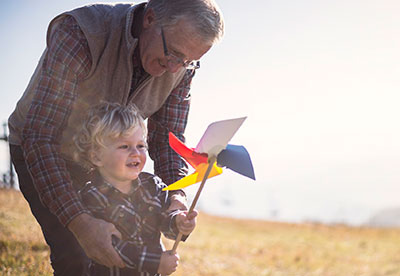 "The difference between a politician and a statesman is that a politician thinks about the next election, while the statesman thinks about the next generation." Although said more than a century ago, James Freeman Clarke's message seems just as relevant today as we continue to grapple with long-term societal issues spanning health care to housing.

How can politicians make decisions that better reflect the interests of people today, while also considering how they will impact generations to come? That is the question posed to a panel of experts and room packed full of concerned actuaries at an event hosted by the IFoA and Foundation for Democracy and Sustainable Development.

This issue of intergenerational fairness lies at the heart of what actuaries do, with the IFoA launching a series of bulletins looking at how to tackle the subject last year. These explored a wide range of topics, such as how pensions legislation impacts living standards, and whether the social care system can survive the demands of an ageing population.

"Long-termism and sustainability are key pillars of the actuarial profession, which means we have a lot of experience knowing and understanding the long-term implications of decisions made today," IFoA immediate past president, Colin Wilson, tells me.

But how can actuaries actually help with the decision-making process? IFoA council member, Louise Pryor, explains how practitioners working in insurance and pensions already give advice to companies based on data analysis, and that this could be extended further to governments.

She believes actuaries might be able to quantify the likelihood of particular policies failing or succeeding, before advising those in power on whether to introduce legislation, and the precautions needed should they fail.

"Most actuarial work involves doing projections into the future, which turns out to be very difficult. But we have developed some reasonably effective ways of thinking about risk and communicating it to others," she continues. "This might be one way we can contribute to the policy debate."

The panel agrees, but bemoans electoral cycles that make it easy for politicians to fall into the trap of offering short-term solutions to big issues in the hope of securing votes.

Joerg Tremmel, philosopher and editor-in-chief of the Intergenerational Justice Review, suggests that a reform of parliamentary institutions might be a solution to this problem - specifically the House of Lords in the UK.

He argues that the establishment should be revamped into a "council for the future" that acts in the interests of future generations by proposing sustainable legislation to the House of Commons.

"And who could better understand the need for an adaptation of parliamentarianism and to the changing times than the Britons?" he asks. "The mother of all parliaments has seen many changes since its beginning, which has nothing to do with getting rid of democracy, just improving it."

The House of Lords has since appointed the Intergenerational Fairness and Provision Committee to consider the long-term implications of government policy on future generations.

While politicians often focus on short-term vote-winners, Clare Moriarty, permanent secretary for the Department for Environment, Food and Rural Affairs, is quick to point out that there are occasions when they do consider future generations.

She explains how projects like the Thames Barrier and Crossrail have been designed to benefit people for more than 100 years, while international agreements like the Montreal Protocol on CFCs and the Paris Agreement were thought up with the future of the planet in mind.

She also singles out the government's recent 25-year Environment Plan for praise, as well as its recent proposals to cut down on plastic pollution, highlighting how Theresa May has pledged to leave the natural environment in a better state than she found it.

"We are really proud of the 25-year plan, and the fact that we have managed to tie in a number of departments around government," she continues. "But it illustrates the challenge of making long-term policies and doing so with credibility."

However, Tremmel insists some governmental structures are outdated, and is keen to mention the work of a profession that thinks even more long-term than actuaries: geologists.

He argues that the invention of geological timescales ranks among the "most important achievements of human thought", and that the new 'Anthropocene' epoch of human influence requires drastic change.

"We have extracted coal, gas and oil in just one or two centuries, when it took hundreds of millions of years for the resources to generate," he says. "The transition into a new phase of geology necessitates a reform of democracy, especially its most important institutions."

Climate change has probably received more media attention than anything else when it comes to long-term risks facing society. Pension funds and investment managers are increasingly aware of their impact, and the IFoA produced a 'risk alert' last year to raise awareness around the financial risks posed by climate change.

Another area increasingly falling within the scope of actuaries is the UN's Sustainable Development Goals (SDGs). The non-binding intergovernmental agreements intend to end poverty, protect the planet and ensure prosperity for all by 2030, with the IFoA recently calling on members to submit ideas on how actuaries can help.

Pryor explains that the institute has received responses from South America to Asia, and that actuaries are now helping people in developing countries with micro insurance and micro savings, which falls under SDG8 to expand access to banking, insurance and financial services for all.

"We have private enterprise setting up some of these schemes, and we are getting a lot of government people thinking about how they can encourage these initiatives," Pryor says. "That is interplay between private and public, and is an area where actuaries are very much involved."

Actuary of the future

Whether it's helping develop government legislation, tackling climate change or delivering the SDGs, there is not doubt that actuaries have a major role to play in intergenerational fairness.

However, the importance that actuaries place on these subjects varies depending on who you talk to, with the IFoA not necessarily expecting all actuaries to be experts on climate change, for example.

"If their main focus is a shortfall in a pension fund today, some of the questions about the long-term impact of climate change probably take second importance to that," Wilson tells me. "But actuaries need to understand the extent to which their advice has taken into account the possible impact of climate change, and make sure that is communicated to the client."

The Task Force on Climate-related Financial Disclosures has made that easier for actuaries, while the Social Progress Index now makes it possible to monitor the progress governments are making towards delivering the SDGs.

With regard to legislation, Wilson explains how actuaries already give advice to those in power through the Government Actuary's Department, telling me that they are involved in a wider range of policy issues "than at any time in history".

"I think that is very positive and demonstrates the value that we are seen to add to these debates. I see that continuing and growing significantly, which can only be a good thing."

Chris Seekings is a journalist for The Actuary magazine