With obesity rates showing no signs of declining, Nay Wynn examines their effects on health, and how actuaries can factor this in when underwriting life insurance policies. 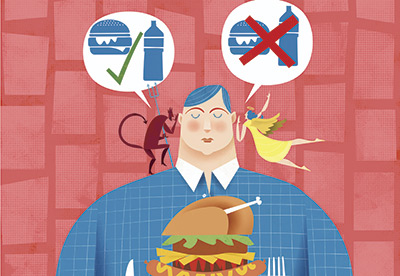 The World Health Organisation (WHO) defines obesity as "abnormal or excessive fat accumulation that presents a risk to health". In practice, it's measured it using the Body Mass Index (BMI) - your weight in kilograms divided by the square of your height in metres (kg/m2). If your BMI lies within the range of 18.5 to 24.9, then you are at a healthy weight; the further you are from this range, whether higher or lower, the greater the risk to your health. A BMI between 25 and 29.9 is defined as overweight, and a measurement of 30 or above is defined as obese.

BMI is often criticised as a flawed metric. For example, it can incorrectly identify athletes as overweight or obese, as muscle weighs more than fat. More seriously, BMI can classify people as being at a 'healthy weight' even if they have a high risk of cardio-metabolic ill health, such as having excess visceral fat around their waist. Despite these drawbacks, BMI is an adequate measure of population-level obesity, tracking prevalence over time.

Obesity in England has roughly doubled during the past 23 years, with the gap between males and females closing in the period. In 2016, the prevalence of obesity was around 28% for males and 30% for females, with 61% of adults classified as overweight or obese. According to the ground-breaking 2007 Foresight report projection, this trend is likely to continue, with more than half of adults predicted to be obese and 90% to be either overweight or obese by the year 2050. The associated direct and indirect costs to the NHS at that time are estimated to reach £50bn - a considerable proportion of the current £125bn spend on the NHS.

The traditional energy-in/energy-out model would suggest that obesity is caused by an imbalance of excessive calorie intake and/or reduced expenditure of calories. However, according to the Full Obesity System Map published in the Foresight report, it is far more complex, with more than 100 factors to consider. Factors such as genetic predisposition, level of recreational activity, cost of food ingredients, level of self-esteem, education and media consumption offer potential intervention points to manage obesity.

We are yet to discover an obesity-causing gene, but we have found genes that influence predisposition towards obesity. For example, the FTO gene, which is present in around 16% of the population, is thought to increase the desire to eat high-calorie food. Those with two copies of the genetic variant are, on average, 3kg heavier than those without, and are 1.7 times more likely to be obese. However, a meta-study on the link between the FTO gene and obesity concluded that having the high-risk variant of the gene made no difference to an individual's ability to lose weight through diet or physical activity.

The increased clinical risk of disease from obesity is a key concern. Obese people have a higher risk of developing type 2 diabetes, and the high blood pressure from obesity leads to significant increases in the risk of stroke and cardiovascular diseases. Obesity itself has been linked to more than 30 different cancers, and Cancer Research UK has been raising awareness of this link at the start of 2018. Finally, after smoking, obesity is currently the second most significant cause of premature death in Europe.

Why is this an issue for actuaries?

Insurance policies are underwritten at the outset with long policy terms of 30 to 50 years, and it is difficult to ascertain what an insured life's health status will be over these timescales. Looking at the current trends in obesity, however, it is likely that the majority of these 'standard lives' will, at some point, be overweight or obese.

We can create a simple model to analyse the potential impact. To keep things simple, we assume zero trends in our base scenario. In our obesity scenario, we assume that half of the healthy lives at the start become obese, say in 30 years' time, and thus have the increased risk of obesity-related diseases. This is modelled with an increasing trend for cardiovascular, stroke and certain cancer conditions. We can then compare the rates we would offer in both scenarios to give an idea of the overall impact.

The overall impact across the book is an increase in levelised rates of around 2% to 4%. This may not sound like much, but if you look at the impact on policies with longer terms, for example, 35 years, the impact is around a 7%-12% increase in rates, depending on whether you think the scenario would materialise in 20 or 30 years' time. This would be enough to wipe out profit margins and would lead to substantial increases in reserves.

A glib response would be that a cure already exists: "Don't eat so much." While this advice is simple, it is ineffective, with obesity prevalence continuing to rise. The National Institute for Health and Care Excellence (NICE) recommends the use of diet, exercise, behavioural therapy, drug treatment and surgery to tackle obesity in adults. The latter two are available for those with severe cases of obesity but carry risks of their own.

Diet is crucial in weight management. Dr Matthew Capehorn of the Rotherham Institute for Obesity explains the difference between eating for weight loss and eating for nutritional health. "You can eat unhealthily but still lose weight if the total calorie intake is less than your individual need. Equally, you can gain weight by eating a nutritionally balanced diet if the total calorie intake exceeds the daily requirement." In terms of reducing morbidity risk, studies have shown that reducing waist circumference is more important than actual diet. Ideally, though, we want people to both maintain a healthy weight and eat a nutritionally balanced diet.

Our relationship to food requires scrutiny; even if we manage to lose weight through a radical diet or a bout of exercise, we're likely to put the weight back on if we don't make a fundamental change to our behaviour - for example if we continue to comfort eat. Controlling appetite can be challenging. Drug therapy and surgery are available for those who are severely obese, but the efficacy, cost and side effects require careful consideration, and these methods do not provide a satisfactory 'cure' for obesity. The impact of exercise cannot be overstated, either. "An obese individual who does a moderate to high level of physical activity can have a lower risk of cardiovascular disease mortality than a healthy weight individual who does a low level of physical activity," Dr Capehorn explains.

Current data supports the view that it is incredibly difficult for obese people to lose weight. A UK cohort study showed the annual probability of obese males transitioning to a healthy-weight state is 1 in 210; for females, it is 1 in 124. The study also showed that, of those who managed to lose 5% of their body weight, 53% ended up regaining the weight within two years - and 78% within five years. Such statistics demonstrate that the rise in prevalence is unlikely to reverse in the future.

"Obesity is a chronic and relapsing condition," Capehorn concludes. "We can never stop someone choosing to eat more or exercise less than they should, just as we cannot stop someone smoking if they do not want to stop. In fact, it's harder with food, because we cannot live without it."

Nay Wynn is senior actuarial analyst in the research team at Hannover Re UK life branch.

This article appeared in our August 2018 issue of The Actuary.
Click here to view this issue
Filed in:
08
Topics:
Health care