Insurance in an unstable world 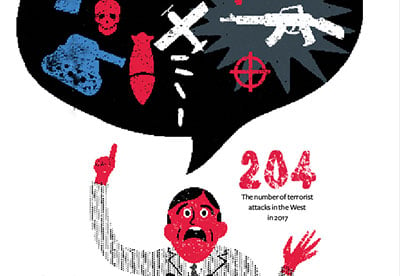 The world is becoming more dangerous, with the potential for interstate conflict as high as at the end of the Cold War, according to Aon's annual Risk Maps, created in partnership with The Risk Advisory Group and Continuum Economics. Drawing on the specialist knowledge of our partners, the maps provide comprehensive insights into some of the most pressing global risks: terrorism and political violence risk, and political risk. As these risks increase in complexity, so do the solutions required. Multinational companies need to understand their exposures and be confident that they have an appropriate risk management programme in place.

For the third year running, we increased the overall risk level for more countries than we reduced, with 17 increases and six reductions. The highest terrorism and political violence ratings are clustered in the Middle East, North Africa and sub-Saharan Africa.

Last year, Islamic State (IS) and its sympathisers mounted attacks in 29 countries - the same number as in 2016. While it claimed fewer attacks in Western countries than in 2016, our analysis points to a sustained threat in south-east Asia. Jihadist groups have long been active in Indonesia and the Philippines in particular, but IS's loss of territory in the Middle East has led to the rebranding of existing extremist groups and the formation of new networks. Most importantly, in terms of terrorism and armed conflict, IS appears to provide a unifying framework for the different Islamist factions operating in the region.

Terrorism in the West

The number of terrorist attacks occuring in the West roughly doubled, from 96 in 2016 to 204 in 2017. Casualties, however, remained fairly static: 1,133 casualties in 2016 compared with 1,092 last year. This demonstrates a reduction in lethality, in spite of the sharp spike in frequency.

This trend was most apparent in the use of vehicles as improvised weapons, which was the most lethal form of attack for the second year running. These saw an average of 2.7 fatalities per incident - a 75% drop from 2016. It is worth noting that the mass casualty truck attacks in Nice and Berlin in 2016 had a significant impact on the number of fatalities that year; greater scrutiny of large vehicle rentals has encouraged the use of smaller vehicles in consequent attacks.

Terrorist bombings have also become less lethal. In fact, the Ariana Grande concert in Manchester in May was the only lethal terrorist bombing in a Western country in 2017. In all other cases, bombs either failed to detonate or appear to have only been intended to damage property. The number of bomb attacks globally in 2017 increased from 46 to 53, but there were only 0.41 fatalities per incident last year, compared to 1.4 in 2016.

The terrorist insurance market was originally established to respond to bomb attacks, but the 2017 data highlights the changing face of terrorism: cover must evolve to respond to these low-technology incidents, where there may have been little or no damage to property. In light of the attack at Borough Market in the UK and the vehicular assaults in Barcelona and New York, businesses are becoming more aware of the importance of non-damage business interruption insurance.

Insurance products are also needed to address the rising levels of cyber terrorism and malicious threat or act, where the motive is unclear and a national terrorism insurance programme is either unavailable or will not cover the incident.

Political violence risks have increased worldwide for a multitude of reasons. Geopolitical tension, the weakening of liberal, democratic governance, complex and protracted armed conflicts, and a wider shift to more authoritarian governance and populist nationalism have all contributed to this worrying escalation.

Perhaps the most concerning message is that the likelihood of interstate conflict involving major powers is now on a par with the end of the Cold War. The divisions between Western powers in the face of complex threats is stark, with the US, Russia, Iran, Turkey and the Gulf powers all pursuing conflicting goals - particularly in Syria. The recent US decision to pull out of the Iran nuclear deal was followed by Israel and Iran firing missiles at one another in Syria.

North Korea and South Korea had their risk levels increased, and war perils remained in place when the Risk Map launched in April. However, the landmark summit between the two countries at the end of April, and the historic June meeting between Kim Jong-un and Donald Trump, suggest there may be an end in sight for this conflict, which has rattled on since the 1950s.

There has been increasing demand for political risk insurance as we increased the risk rating of 11 countries in this year's Political Risk Map, while only two risk ratings were reduced. The region that suffered the most adverse rating change in 2017 was Africa, due to ongoing conflicts, the erosion of democratic governance and the all-too-frequent political scandals that thwart the continent. IS and Boko Haram have been taking advantage of fragile institutions and weak borders, and this trend will continue to increase refugee outflows from these countries.

Insurers will continue to be challenged by global macroeconomic, social and regulatory changes. While political risk is still considered to be an attractive and profitable line of coverage, insurers will have to focus on risk selection in order to weather the increasingly competitive and challenging macroeconomic climate.

There has been increased interest in insurance coverage for projects in Africa and Latin America. While there have been signs of recovery for some countries in these regions, the declining revenues faced by economies that rely heavily on natural resources have left them challenged by budget deficits. Investors are therefore still not confident of these countries' ability to meet their fiscal obligations.

The Middle East contains some of the highest risk countries in the world: Iraq, Syria, Yemen and Egypt. Instability and violence have also spilled over to neighbouring countries, undermining trade and tourism. Regional conflicts, sanctions and blockades have led to companies seeking protection for projects in countries such as Qatar, Saudi Arabia and Yemen in the Middle East and Russia, Turkey and Ukraine in Eurasia.

The balance of power in Asia

As a result of China's status as a global trading giant, trade ties in Asia are becoming more closely bound to China - at the expense of trade with the US. Roughly 20 years ago, Asia was exporting 23% of its total exports to the US; that figure now stands at around 12% (see Figure 1). In the meantime, Asia's exports to China have more than doubled, to around 23%. Our analysis predicts that Asia's exports will continue to grow by 5%-10% in 2018.

This shift in trade balance is not equal across Asia, however: Singapore, Malaysia and South Korea are more exposed to China, while Indonesia, Japan and New Zealand's economies are still more tied to the US, and south-east Asia is more diversified in its trade partners. 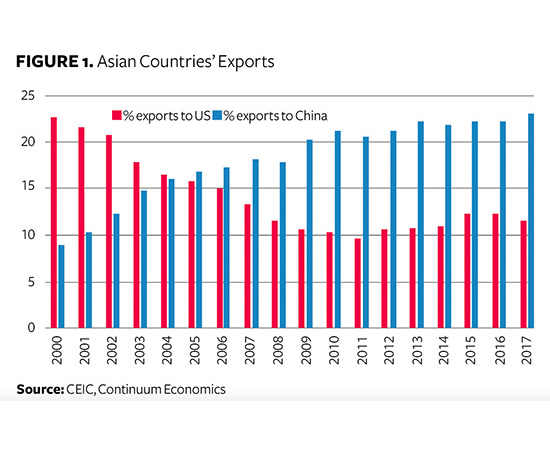 Emerging markets, particularly commodity-driven economies, are under pressure from increased debt burdens as a result of inflation, interest rate hikes and the strengthening of hard currencies.

Conversely, this commodity price recovery will hit the balance sheets of countries that are reliant on commodity imports; fortunately, most of these countries are in a position where they can shoulder this burden. South-east Asia is the only region that will struggle due to this reversal of fortune.

Protectionism is making trade more challenging, capping growth and heightening volatility. Uncertainty regarding US trade policy means that intra-regional trade deals are likely to emerge in Asia, Europe and Latin America, and this will lead to the creation of new supply chains. Risk of supply chain disruption has increased over the past year and remains a meaningful concern, even for the strongest countries, which tend to be reliant on exports.

Natural catastrophe events have, unsurprisingly, heightened the risk of supply chain disruption in the Caribbean, Antigua and Barbuda, St Martin and many US territories. While affected regions undergo reconstruction, they are also likely to experience increased institutional and regulatory risk.

Evolve for the future

With the challenges and threats we face showing no sign of abating, the impact of terrorism and political violence and political risk is most keenly felt by businesses that urgently want to protect their people, operations, assets, revenue generation and supply chains. As we confront volatility and uncertainty across the world this year, it has never been more important for risk managers to wholly understand their exposures globally, and to align their investments wisely. The insurance market must continue to evolve the products that it offers in these areas, which are so notoriously difficult to underwrite. Ultimately, the market must ensure that it provides genuine support to the clients it serves, protecting them against the threats that exist in an increasingly unstable world.

This article appeared in our July 2018 issue of The Actuary.
Click here to view this issue
Filed in
07
Topics
General Insurance