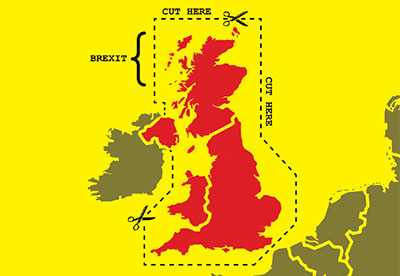 There are a number of different scenarios when it comes to how Brexit could look, all of which have been well documented. The next few months could be a critical time for some of the key issues to be negotiated - issues that will have a big impact on both insurers' plans and how people feel about living in the UK.

Opinion in the UK seems divided; from what I've gleaned during conversations with friends, colleagues and clients, people seem to be polarised into one camp or another. Even the cabinet appears to be split over which is the best path. Contrast this with what seems to be a coordinated European Union, and we are in for an interesting lead-up to Brexit.

LinkedIn produces a UK workforce report every month using information from the profiles of more than 24 million people in the UK. The April report, based on the latest data from March 2018, looks at hiring and professional trends in the UK. Its key insight is that the UK has become a net loser of international talent: professionals from the rest of the world are instead choosing to move to other EU member states.

Brexit could have a significant impact on the UK insurance industry - especially firms with operations in Europe. UK insurance companies are looking at their operating models and designing strategies to mitigate the potential effects. Having the right people in the right locations will be critical, and Europe could benefit. More and more insurers are implementing their plans and starting to hire.

Many insurers are opting for Belgium, Ireland or Luxembourg, with the regulators all expecting some degree of local presence and structure. Generally, we are seeing regulators wanting to approve candidates who are sufficiently qualified and based in the relevant country. The types of posts being hired include CEO, CFO, CRO, chief actuary, and legal and compliance positions. These are highly skilled roles, most of which are being hired for locally.

We are seeing an increase in recruitment as a result of new insurance subsidiaries in the EU, which has led to an increase in demand for people who possess specialist skills - such as actuarial, risk, finance, compliance and law, and underwriting. We are also seeing this in speciality classes, where the pool of talent possessing the relevant skill set is small. We have also seen an increase in hiring at some local regulators, such as in Luxembourg, and at consulting firms, as they play their part in developing Brexit strategies for their clients. In Luxembourg and Dublin, there might not be a sufficiently large pool of talent with insurance experience - but if firms are prepared to look into adjacent sectors, such as banking and asset management, they will find plenty of suitable people.

If firms are deciding to set up in markets that have a lower availability of talent, companies will need to think about accessing the global insurance talent market to secure the best available candidates. The easiest options will be EU citizens, candidates commuting from the UK, and expats. There will need to be careful consideration about how to attract these candidates, and why their career and personal life would be better served in a new position and country, versus their current role and location.

We are also seeing a growing number of EU companies setting up branches or subsidiaries in the UK as an insurance policy against Brexit. It's difficult to say how much of an impact this will have on insurance jobs in the UK, but we've seen a small increase.

In summary, talent availability should be one of the key considerations for firms that are deciding on their Brexit strategy. Each regulator will require firms to establish a staffed office, but to varying degrees. So far, Brexit seems to have created more jobs in the EU insurance market. Over the next few years, there will likely be other developments that will have a bigger impact on the number of jobs in the EU and UK insurance market, such as artificial intelligence, automation and an increase in mergers and acquisitions. We still don't know what Brexit will look like, or what the effects will be - the only certainty is that things will be changing.

Lewis Maleh is the CEO of Bentley Lewis

This article appeared in our July 2018 issue of The Actuary.
Click here to view this issue
Filed in:
07
Topics:
General Insurance
Regulation Standards
Risk & ERM