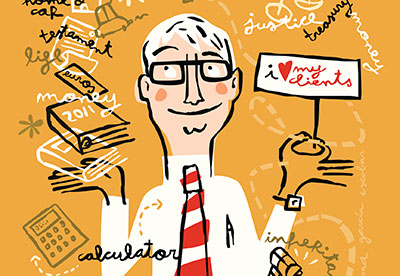 Actuaries are used to dealing in risk, at least the risks of others. But there is another kind of risk. The risk of getting it wrong and of being liable for the consequences.

This article is about the nature and extent of that risk, how the law will treat the negligent actuary and what you can do to protect yourself.

For a claimant to win a claim for professional negligence, they need to show that:

Duty: who is my client?

The client will be owed a duty of care. The client is normally the person who retains the actuary and who is liable to pay the actuary's fees and with whom, ideally, there is a signed retainer letter.

But business life is not always that simple. A professional hired by X might also be found to owe a duty to Y. This will depend on a range of factors  the current favoured test is whether, in all the circumstances, the professional's actions were an assumption of responsibility to Y. Where the professional knew or ought to have known that Y would rely on the work and might suffer loss if it was wrong, then often the professional will be held to owe Y a duty.

In the world of pensions advice, this scenario can be readily understood. Just because trustees retain the actuary to give advice, the employer can still be owed a duty of care as well.

After all, if the actuary says substantial extra contributions are necessary, and the relationship between trustee and employer is a co-operative one where the employer is foreseeably likely to automatically follow any such advice, it would seem hard to say that the employer would have no remedy if the actuary's advice turned out to be wrong.

But the duty might go further. Transferring out of defined benefit schemes is currently very common. If an actuary has calculated that value wrongly, leading to underpayment to members, it might well be that groups of members band together to bring a claim against the actuary and they would be owed a duty of care, especially if the actuary prepared bespoke valuations for each member.

Or if an actuary wrongly advises trustees that scheme benefits should not be raised or, worse still, should be cut, the members might claim against the actuary for being deprived of benefits otherwise due if it later proves impossible to correct the position.

An actuary might even give information or advice about the solvency of the pension fund in the context of a mergers and acquisitions transaction. If that is foreseeably relied on by an acquiring company, the actuary could well be liable for any errors.

So the breadth of potential victims, and claimants, is much wider than just the client. These issues commonly arise in claims against accountants, auditors, lawyers and valuers. There is an extensive body of case law, and much depends on the individual facts.

The best defensive practice is to clearly define the client and ensure that all advice is addressed to only that client - and can be relied on by only that client. On top of all this, an actuary, like all professionals, owes a duty to his client to act with loyalty. If you form the view that there is reason to consider another actuary has seriously erred, the law would normally expect you to report this to your client.

In assessing whether an actuary has been negligent, the test is whether any reasonably competent actuary in his or her position could have acted in the same way.

If the mistake is one of arithmetic, this is easily established. If, however, the mistake related to a matter of judgment or assumption, then it will be more difficult. If a reasonable body of opinion would have done the same and it is not a logically incoherent position, then generally speaking it will not be negligent.

Traditionally, the courts would grant the actuary a large amount of discretion before finding negligence, but there may be signs this approach is becoming more nuanced.

In the medical negligence world, physicians and surgeons have to grapple with difficult matters of judgment on a daily basis, yet successful claims are made every day.

Surveyors often value development sites, and in doing so must make assumptions about the future value of the developed site, the various inputs to get there (the cost of build, funding, profit, etc) before reaching the market value of the undeveloped land.

The court's approach to such claims is to identify for itself the "true market value" of the land, apply a margin of about 15% and if the valuer is outside that margin, they will generally be found to be negligent. It might well be the case that the court takes the same approach in an actuary claim.

For example, if the actuary says a scheme's deficit is £100m, but the court finds the "correct" amount was £150m, and if although the employer is now insolvent, properly advised it could and would have made a greater contribution, then the actuary will be liable to make good the loss.

Or suppose that an actuary helps to formulate a pricing strategy for a car insurer that seriously underprices the risk. Although the insurer might at first be delighted to be propelled to the top of the comparison website tables, once a flood of dreadful claims come in the underwriter might want to recover from the actuary. If the actuary has made a single wrong assumption, they could well be liable.

Ultimately, litigation is about money. The extent of any damages ordered against an actuary depends on the loss the claimant can prove they have suffered. This is often the most difficult part of a claimant's case. There are two concepts here: factual causation and legal causation. Factual causation is the "but for" test - but for the negligence, what would have happened? Compare that to what actually happened and the difference is the loss factually caused by the negligence.

So if a scheme would have been £20m better off, or a member £20,000 better off, the numbers are simple. If a car insurer would have priced premiums higher, the maths is a little more complex, but the issues still relatively straightforward. The claimant would have to show what loss they actually suffered and compare that to the hypothetical situation where they would have had higher premiums but fewer policies and fewer claims.

But factual causation is not the only test. Legal causation is also necessary. This means asking whether the loss sought falls within the scope of the professional's duty.

This is best illustrated by the parable of the skier's knee. Assume a skier goes to the doctor for a pre-holiday check-up. The doctor negligently fails to identify a weak knee. While on the mountains the skier falls victim to an avalanche.

In this way, the law endeavours to ensure that the professional is only liable for losses attributable to the scope of the duty owed to the victim. This means that there must be detailed scrutiny of the role of the professional and comparison with the type of loss sought.

What can be done to minimise liabilities? Agree client care letters. Make sure they clearly identify the client and limit the amount of potential liability. Make sure this is clearly and visibly identified. When giving advice, clearly address only those to whom you are willing to accept liability, and expressly disclaim it in respect of all others. If circumstance arises where you fear there might be a problem, seek advice. If you think someone else has made a mistake, your client should probably be told.

This article is a general summary of the law of England and Wales. It should not be relied upon for any specific purpose or matter.

This article appeared in our April 2018 issue of The Actuary.
Click here to view this issue
Filed in
04
Topics
Professional