The long-awaited standard on insurance contracts, IFRS 17, was published on 18 May 2017, and the countdown is now on for companies to be ready for implementation. While the standard will have to be applied for reporting periods starting on or after 1 January 2021, this will require an opening balance sheet at 1 January 2020.

Given the scale of the standard's impact and its principles-based nature, insurers will need to make many technical decisions that will have significant financial and practical consequences on implementation.

In this article, we look at the possible transition measures for each group of contracts that are available under IFRS 17. The decision made on the transition measures is one of the most significant choices for the standard's adoption, as it will impact the initial balance sheet, the level of future profit released and, as a result, affect future comparability between insurers over a long period of time, as well as the operational complexity of implementation.

The first of three approaches available to insurers is the full retrospective approach, which has to be applied unless impracticable. What this means is that for each group and each cohort of contracts, an insurer must go right back to contract inception and project forward the contractual service margin from that date right up to the transition date.

This will involve a significant amount of historic data, assumptions at the point of sale and modelling complexity. Gathering information for contracts issued many years before transition could be either very costly or not possible.

A key feature of the modified retrospective approach is that there is no requirement to divide the groups of contracts into annual cohorts, unless the insurer has reasonable and supportable information to justify the divisions, which could help make the data requirements less complex. However, the disclosures will still be quite onerous, and any approximations that are taken will need to be justified, not just at transition but every year thereafter.

Under the fair value approach, the contractual service margin is determined as the difference between the fair value of a group of insurance contracts (measured in accordance with IFRS 13) and its fulfilment cashflows at the transition date (which are determined in accordance with IFRS 17). There is no requirement to divide the groups of contracts into annual cohorts.

Historically, many insurers issuing long-term contracts applied market consistent embedded value (MCEV) or European embedded value (EEV) principles to measure insurance contracts for supplementary reporting purposes. Where still produced, insurers will be able to use these measurements or other economic-based regulatory measures(such as Solvency II in Europe) as a starting point for the fair value approach on transition to IFRS 17, with adjustments to reflect market valuations.

The International Accounting Standards Board (IASB) acknowledges that the optionality available on transition will result in less comparable financial statements until the contracts written before the transition date are derecognised. However, it concluded that the costs associated with the full retrospective approach or modified retrospective approach might exceed the benefits if there is little information available on the transition date. 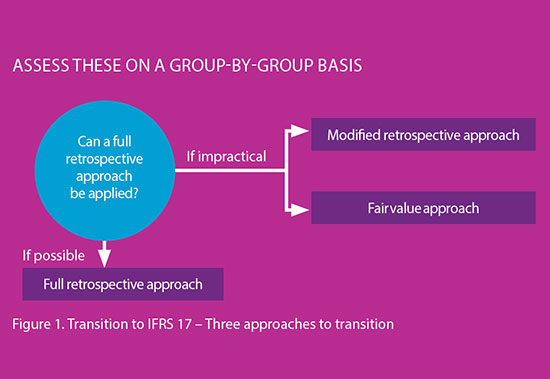 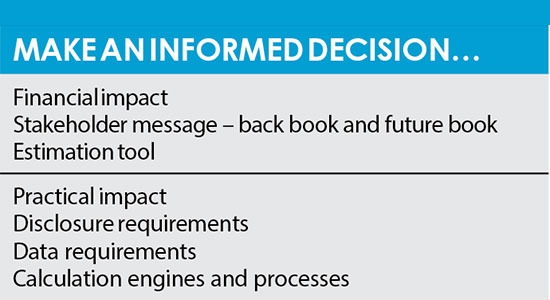 Once selected, the transition approach will directly impact an insurer's financial results, both in terms of their Day 1 balance sheet and future profit emergence. For this reason, it is important that the decision is made based on a full appreciation of the financial and practical considerations:

Being able to identify necessary disclosures will allow users of financial statements to then assess the effect that contracts within the scope of IFRS 17 have on the insurer's:

This will be a complex process, requiring quantitative and qualitative information about amounts recognised in the financial statements, significant judgements (and changes thereof), and the nature and extent of risks arising from contracts in the standard's scope.

Insurers will also benefit from communicating at an early stage to key stakeholders, including market analysts and shareholders, the expected impacts to the financial statements and profit profiles. This will require firms to source data and build a tool capable of estimating what these financial impacts will be, and how these compare with other metrics.