Take my breath away: how pollution is causing a health crisis 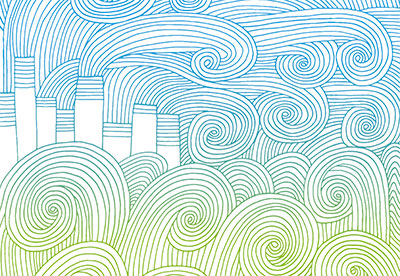 The natural environment is an important influence on human health and lifespan. The Lancet Commission on Pollution and Health recently reported that an estimated nine million deaths worldwide - around 16% of the total - were caused by pollution in 2015, including 6.5 million by air pollution. Most of these deaths occurred in low- and middle-income countries, but there are a significant number in high-income countries too; The Lancet's estimate for UK pollution-related deaths is approximately 8% of its 2015 total. Previous Lancet commissions found that climate change is the biggest threat to global health in the 21st century, but that there is still the potential for this to improve.

My aim is to generate interest in these topics and inspire actuaries to find out more. An IFoA working party has been investigating the effects of environmental issues on UK mortality. There are currently too many unknowns to make robust recommendations. Nonetheless, it is important for actuaries to understand these uncertainties, so they can make informed judgments when setting mortality assumptions.

It is important to consider the implications of the changing environment, as well as changes in medical care, lifestyle and wealth, when making assumptions about future mortality rates. It will also help you comply with the IFoA's May 2017 risk alert, which requires you to understand, and be clear, in communicating the extent to which you have taken account of climate-related risks in your work. Above all, I hope you will feel inspired to contribute to the many avenues for further research we identified. 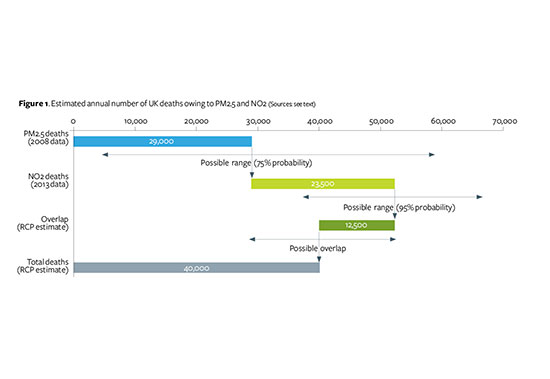 The air pollutants of concern have changed over time. Smog was a major problem in 1950s London, and still is today in cities in China and other developing countries. Then worries emerged about lead additives in petrol. These days, in developed countries, the major air pollutants are particulate matter (PM) and nitrogen dioxide (NO2) from fossil fuel combustion, particularly in diesel and petrol engines. As awareness of the health impacts of air pollution has increased, so has public concern and media comment. The UK government has been taken to court and found guilty of not acting swiftly enough to comply with European legal limits on NO2 levels.

Long-term exposure to air pollution is associated with a wide range of health problems, including ischaemic heart disease, stroke, chronic obstructive pulmonary disease and lung cancer. A widely cited figure is that around 40,000 UK deaths a year are linked to air pollution, which is approximately 6% of the total. To understand the implications for actuarial work, it is helpful to unpick this figure (see Figure 1). The headline number comprises an estimated 29,000 deaths from PM2.5 (particles of diameter 2.5 micrometres or less), plus 23,500 deaths from NO2, less an approximate adjustment for overlap between the two.

Note that the estimates for each pollutant use a single percentage increase in mortality, which does not vary by age or gender. While age- and gender-specific impacts would be more useful from an actuarial perspective, such differentiation is likely to be spurious given the uncertainties involved.

COMEAP has translated the 29,000 PM2.5 deaths in 2008 into an estimated loss of 340,000 life years. It calculated this figure by multiplying the extra number of deaths at each age by age-specific life expectancies. It therefore does not allow for any differences in life expectancy between those vulnerable to the effects of air pollution and the general population.

Another important point to be aware of is that these are not 40,000 deaths directly attributable to air pollution. Instead, the figure is an equivalent number of deaths based on a shortened lifespan for a much larger number of people. Rather than PM2.5 directly causing 29,000 deaths in 2008, COMEAP has speculated that the effects may have been spread across up to 200,000 deaths.

How relevant are these figures for other countries? The headline impact coefficients of 6% for PM2.5 and 2.5% for NO2 could potentially be combined with data on local pollutant concentrations to estimate the mortality impacts in other countries. These coefficients are not UK-specific but are based on data from other developed countries, although further work would be needed to assess their applicability to specific countries.

Climate change will have a range of effects on human health, as outlined in Louise Pryor's article in the October issue of The Actuary. This includes deaths linked to flooding and storms - not just direct deaths but also deaths arising from the knock-on disruption to healthcare services or the mental distress caused by losing one's home. There will also be changing patterns of vector-borne disease such as malaria and dengue fever, owing to the impacts of the changing climate on insect populations. Potentially, the biggest mortality impacts will arise from macroeconomic effects such as lower economic growth and higher food prices, resulting in lower healthcare spending and poorer nutrition. However, much of the research has focused on temperature-related deaths as these are the most readily quantifiable.

Gasparrini and colleagues analysed the temperature-mortality relationship for 384 locations around the world. Figure 2 shows the resulting chart for London. They found that the lowest mortality rates occurred at 19.5oC, corresponding to the 92nd percentile of the temperature distribution. They designated excess deaths occurring above this temperature as heat-related and those occurring at lower temperatures as cold-related. Using this definition, 9.5% of London deaths were attributed to cold and 0.5% to heat over the period 1993-2006. Note that these cold-related deaths occur throughout the year, many at fairly mild temperatures. 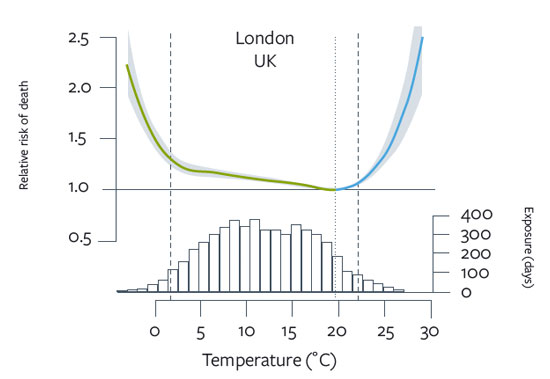 Figure 2. Relationship between temperature and mortality (relative risk of death) for London, using daily data between 1 January 1993 and 31 December 2006. The optimum (minimum mortality) temperature is shown by the dotted line, and the 2.5th and 97.5th percentiles of the temperature distribution are shown as dashed lines.

Most of the published research considers the number of deaths that may be linked to temperature. More useful from an actuarial perspective would be the impact on life expectancy. The information on this is limited, but it seems that temperature changes may bring forward deaths by only a few weeks or months in some cases, thus limiting the effect on life expectancy.

How much do temperature-related deaths vary by country? Apart from the obvious variations in climate between countries, there are also significant variations in the strength of the relationship between mortality and temperature. Reasons for this include: differences in demographic and socioeconomic profile (older and poorer people tend to be more vulnerable to temperature); housing stock (especially cost and availability of heating and air-conditioning); and behaviour (reducing exposure to temperature extremes). It is therefore important that any study of temperature-related mortality uses data for the relevant geographic area.

While understanding current mortality patterns is an important starting point, information about trends over time is critical for setting actuarial assumptions. First, how mortality rates have changed in the recent past in response to changes in air quality and temperature, to identify the information that is already reflected implicitly in mortality projections which extrapolate from historic data. And second, how these trends may change over time, so they can be reflected in assumed rates of future mortality improvement. However, so far, there has been limited research in this area. Hopefully, air quality will improve through policy interventions such as clean-air zones in cities and advances in vehicle technology, including the shift to electrical vehicles, which is gathering pace. If so, then current data may indicate an upper bound on the number of deaths. However, in some countries, efforts to tackle pollution may be hampered by rising car use and more stagnant air resulting from climate change.

For example, in 2014, Hajat and colleagues estimated that, if no allowance is made for changing population size and structure:

This implies that net temperature-related deaths may fall in the UK over the coming decades. However, as with the air quality figures, these estimates are highly uncertain.

So what can actuaries do, given the uncertainties? First of all, knowing more about this topic helps with making informed judgments when setting mortality assumptions and communicating the approach that has been taken. Second, it highlights the importance of illustrating the range of possible mortality outcomes, perhaps widening the range in both directions compared with current approaches. Third, a better understanding of the uncertainties may influence decisions about whether to hedge mortality. Lastly, there are many opportunities to contribute to increasing our collective knowledge by helping to address research gaps that the working party has identified. These include:

Read the working party report at:

See The Lancet report at: bit.ly/Lancetreport

Claire Jones is founder of The Relevance of Resource and Environment Issues to Pension Actuaries Working Party and a senior consultant at LCP.

The other members of the working party's mortality subgroup are: Stuart Gray of Hymans Robertson, and Laura Duckering and Stephan Le Roes, both of Willis Towers Watson.

This article appeared in our January 2018 issue of The Actuary.
Click here to view this issue
Filed in
01
Topics
Environment